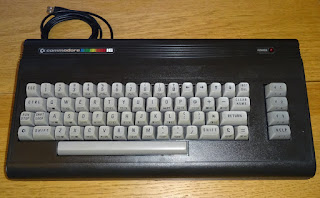 I've been asked to build one, so here it. As with all of the keyboards, I start by refurbishing the keyboard, stripping it down to the chassis, cleaning and reassembling. 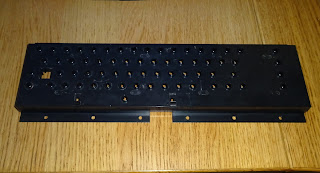 The frame is the same as the Commodore 64 and VIC 20, and almost the same as the Pet business keyboard, and the key stems, springs and keycaps are interchangeable with all but the early versions. 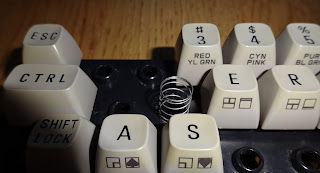 The only change is the colour and legends on the keycaps and the layout of contacts on the PCB. 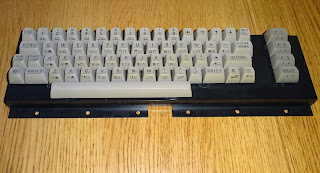 Once all the keys are reassembled, and the PCB cleaned, the PCB is screwed back into the frame. I use the USB keyboard controllers to test the keys, to make sure each key is responding. Sometimes the key stem contacts need a bit of extra cleaning, but they are fairly sturdy keyboards. 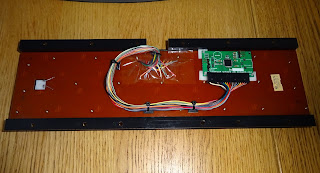 Once tested, the controller is fixed to the back of the keyboard, and the keyboard cable clipped into place. 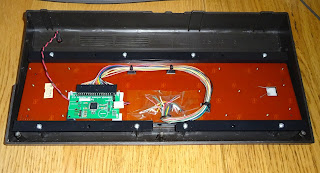 The keyboard into the lid of the case. The power LED is plugged into the USB keyboard controller, leaving just a USB connection between the case halves. 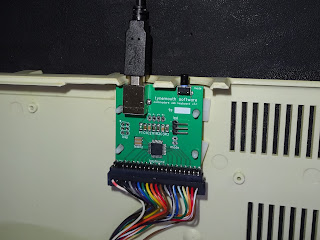 There is an option to fit this with a mode switch to change between keyboard mappings for general use, and a mapping specifically for use with Vice Commodore 16 emulator. This uses a different controller board, and there would be a mode switch connector to the rear panel. The power LED is changed for a tricolour one, green for normal use, red for emulator use. I can also fit the USB socket externally, so the keyboard can be used as a USB keyboard, or with the Pi using a short loopback cable. 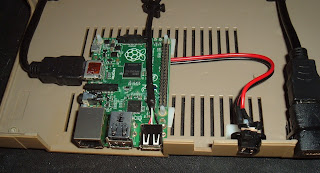 The Rapsberry Pi B+ and Pi 2 B have 4 USB ports, I remove one of the dual USB connectors and replace it was a single USB connector, and wire a lead into the pins for the second port. This connects to the USB keyboard controller, and leaves 3 ports externally accessible. (shown above on a Commodore 64 version). 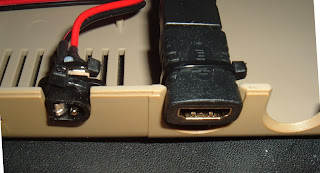 Power is extended from the board to a 2,1mm DC jack. I'm not a fan if the microUSB connector for the Pi, there are that many cheap microUSB cables and chargers which are not up the job. They may be fine for charging phones, but the Pi needs a better supply. I find the ones with 2.1mm DC jacks tend to be better, so I use one of those. 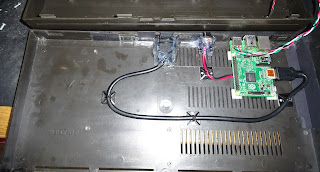 HDMI is extended from the side of the Pi to the hole where the 'Video' connector originally went. Those are then covered in unecessary amounts of hot melt glue to hold them in place. The completed lower case, in the tradition of the original Commodore 16, it's half empty. 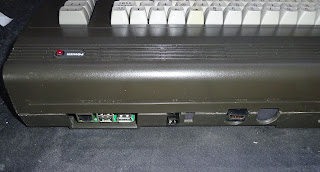 The two halves folds closed in the standard way, leaving access to LAN, 3 USB, power and HDMI out. There would also be a mode switch there if the mode switch mapping option was selected. 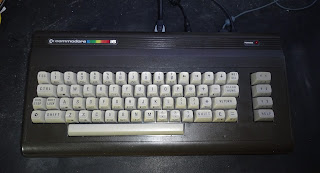 These are now available from my Etsy store. As with the other versions, this is available with the Raspberry Pi B+ or Raspberry Pi 2 model B with the faster processor and more RAM. These are supplied with a microSD card installed and tested running Raspian. I can set up alternate operating systems as required for dedicated media players or arcade emulators.
Posted by Dave Curran at 11:50