I've been looking around for a Commodore Pet 2001 to add to my collection, as I'd like to be able to test the pet microSDs and ROM/RAM replacement boards on a range of machines. Full machines seem to go for quite a bit these days, but I recently won a 2001 mainboard on ebay. In the listing, the seller mentioned they had other bits from the machine. It turns out he was in the process of converting the 2001 into something else. I mentioned my range of USB keyboards, and asked if it would be useful for him to be able to use the Pet keyboard as a USB keyboard. A deal was arranged, I ended up with all the other bits removed from the 2001 (a 2001-32 N), and he got a USB keyboard controller board. 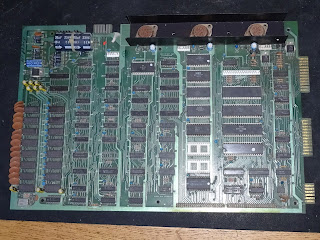 This is another of the USB keyboard conversions that I wasn't planning to do. It is a Commodore Pet USB keyboard, that is, a Commodore Pet keyboard that can be used as a USB keyboard on a modern PC. I'd rather see Pets restored as Pets, rather than turned into media players. But this one was already in progress, and the innards of the 2001 will live on. Well, I hope they will, I'm determined to get it running. but it's going to be quite a job, the board is in rather poor condition, 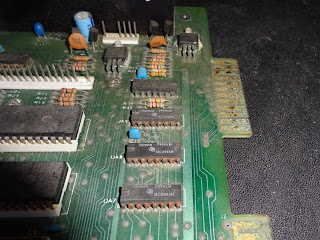 Over the years of making these USB keyboards, I've produced various shapes and sizes of controller boards, including one specifically for Commodore keyboards like the C64 and the VIC20. 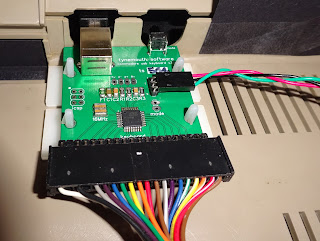 Unfortunately, although the Pet uses the same connector, it is a 10x8 matrix, rather than 8x8+1 as in the C64, so the microcontroller on that board was one I/O pin short of being able to do that. 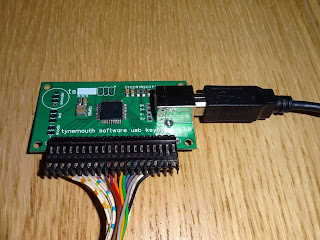 Instead, I went for one of my generic USB keyboard controllers with a larger microcontroller and a few more I/O pins.The mapping was fairly simple as most of the keys only have a single function. 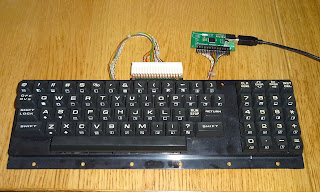 This is the Normal / Graphics keyboard (see my previous post on editor ROMs for more info on Pet keyboard types). 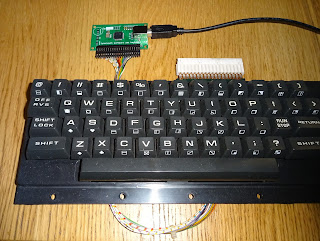 Even the top row of keys that are usually numbers and symbols are only symbols on this keyboard. The numbers are only on the numeric keypad. 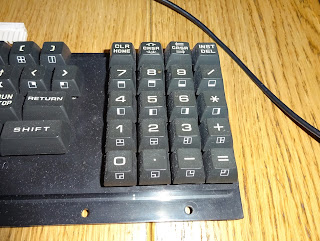 I also built a version which works with the business keyboard layout:

These boards have turned out to be quite useful for testing these keyboards when refurbishing them (see a previous post on cleaning Pet keyboards). 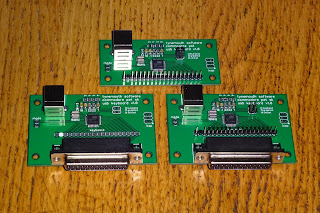 If you want to support this blog, you can donate via Patreon or Paypal, or buy something from my store. 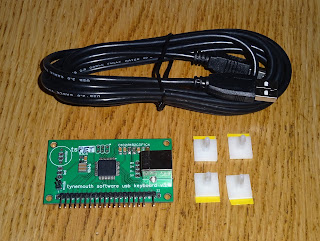 I can supply these as a kit, which contains USB keyboard controller, mounting pillars and a USB lead.