This is day 10 of the Advent Calendar of USB keyboards. Today, a Spectrum +2 USB keyboard, but one with a difference. The buyer asked if I could fit a USB socket inside the tape deck, so they could charge their phone. 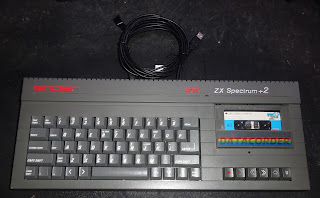 No problem, I always like it it when someone comes up with something I hadn't thought of. I was looking at fitting a USB socket inside, but there wasn't really anywhere one could be mounted to. Then I remembered a 'novelty' USB hub I had bought a while ago, I think they have now been discontinued (but so has the Spectrum +2). 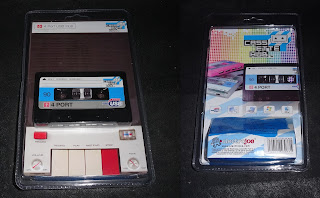 This is the same size as a cassette tape, but is a 4 port USB 2,0 hub with 4 USB ports on the edge. It wasn't designed to be put into a cassette deck as doesn't have holes for the various parts that stick into the open edge of the cassette. But it does actually fit and has rotating reels in the centre. It won't close due to various parts of the cassette drive mechanism below. 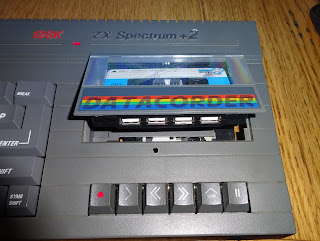 I had a Spectrum+2 cassette deck (sorry 'datacorder') that was faulty and had already been partly stripped for parts, so I removed some more. I had to remove the capstan, pinch rollers and some plastic guides to get it to close, and the playback and erase heads to avoid fouling with the USB hub when play is pressed. 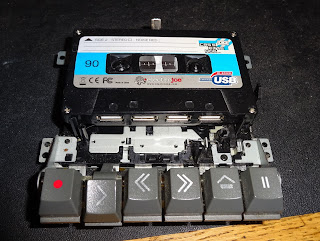 You can press play and it won't damage the hub. Nothing will happen, but you can still press the buttons if you want. 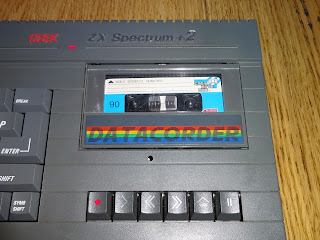 When closed, it just looks like there is a tape of games in. Or a tape of anything - I found this in a Spectrum +2 last week, wouldn't load for some reason. 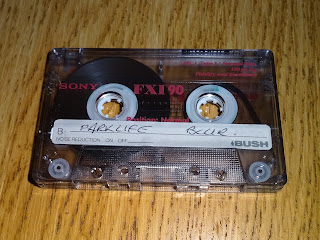 Inside there was a cutout on the back where the record tab sensor was positioned, this wasn't quite in the right place for the mini USB connector on the hub. 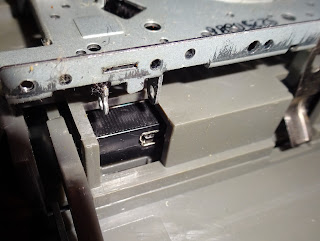 With that enlarged, the miniUSB is plugged in and the wire is led out of the back of the case. 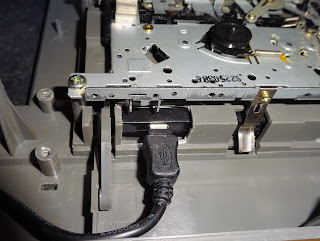 This is the grey +2 model, which has a different keyboard membrane to the later black +2A, +2B and +3 Spectrums. This one is still an 8x5 matrix, like the original Spectrum and Spectrum+. 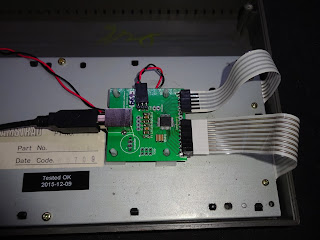 With the keyboard stripped down for cleaning, you can see the parts of the multilayer matrix. The first part is a two layer membrane for most of the keys.

On top of that is another two layer membrane for the special keys only (space is at the top of the picture).

All back together, the two layers are joined by conductive pads on the left hand side, held down by 4 screws.

I've left the USB keyboard and the hub separate, each with their own USB leads coming out of the case. The hub one could be connected to a USB port, or to a mains USB charger. 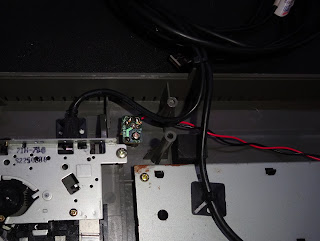 The power LED is wired to the USB keyboard controller, so will light up when it is active. When you want to charge you phone, just press eject to open the hub and plug in your normal charging cable. 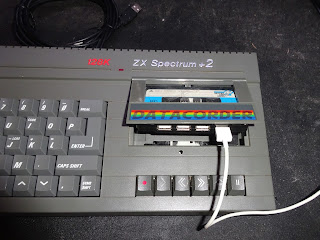 Tune in tomorrow to open another window on the Advent Calendar of USB keyboards.
Posted by Dave Curran at 07:48