This is day 2 of the Advent Calendar of USB keyboards. Today, an Acorn Electron USB keyboard. 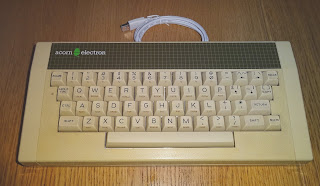 Unlike it's big brother, the BBC Micro, this is a fairly standard matrix keyboard. The unusual flat flex cable plugs directly into one of my USB keyboard controllers. The round black object on the left of the board is a piezo sounder. I couldn't resist recreating the power on sound of the Electron or BBC on these keyboards. 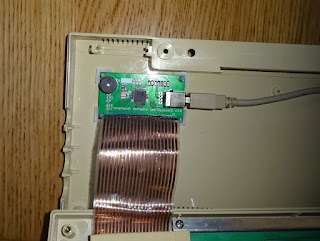 The keyboard mapping is fairly straightforward, function keys are func+ numbers, keys with multiple symbols on have shift + key for the left hand symbol, and the ctrl + key for the right hand key. 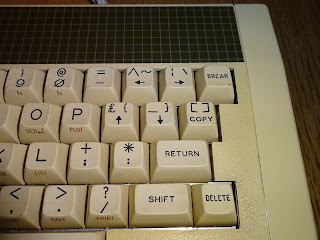 When I was looking around for a candidate for conversion, I found a prototype I had made early on. This one had a damaged flex, and so I had fitted a ribbon cable, wired in this case to an arduino shield. That was plugged into an Arduino Leonardo, I was investigating using the Arduino HID library, but it didn't work too well in this application. 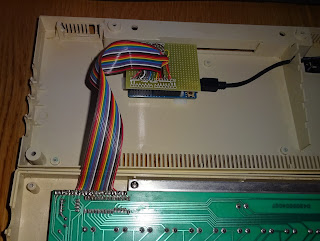 From what I remember, you sent it characters and it converted those to USB key codes. Which was fine for the letters and numbers, but I needed to have a lookup table of what I needed to send to get the right key pressed, and couldn't get several keys I needed. Shortly after that, my made the first PCB versions, with custom firmware. 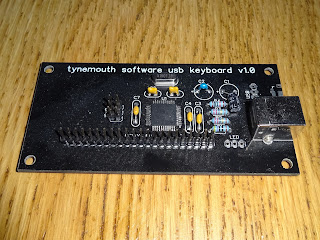 I think black solder mask PCBs were on offer that week. The new versions are a bit smaller, and a bit greener, now all surface mount, but essentially the same circuit. 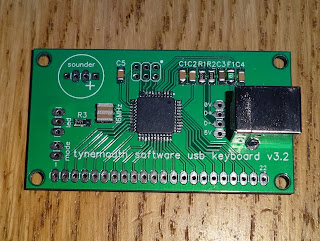 You can order a conversion kit below. The kit includes the controller board, mounting pillars and a USB lead: 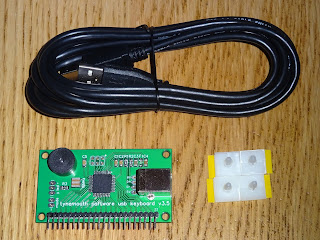 Update:
I can now supply these with the keys mapped for normal desktop use, or for use with RISC OS Pico

Tune in tomorrow to open another window on the Advent Calendar of USB keyboards.
Posted by Dave Curran at 08:34