Here we have an Atari 800XL board. This had a RAM fault, and the owner has started to replace the faulty RAM chips. 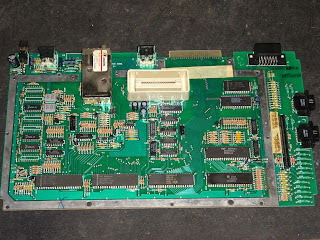 I normally try to avoid working on boards which someone has already had a go at, as it often takes longer to resolve problems caused by the repair, before you can even start on the actual original fault can be fixed. However this one wasn't too bad, and it was a favour for one of my Patreon supporters.

[Quick advert] Patreon is a good way to help support this blog, keep these blog posts coming and save me from having to give this up and go and get a proper job. [Advert over] 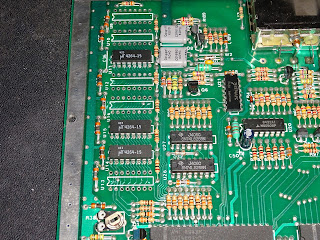 He had removed 5 of the chips and started on the final three, but had damaged one of components on the left hand side, and thought this might be made of unobtanium so gave up. 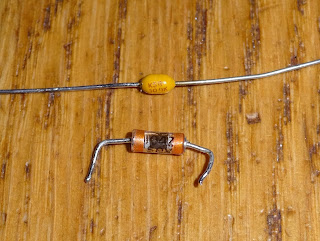 These look exotic glass cased devices, but are in fact just standard 100nF decoupling capacitors. They actually look like surface mount capacitors in a diode style glass case. These boards are particularly tricky as most of the tracks are on the top of the board, with only a few tracks, on the bottom of the board. 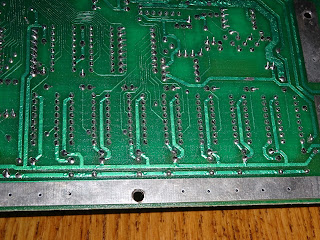 This makes it more likely that the tracks on the top of the board can be damaged when levering out of the chips (don't do this), or if they haven't been fully desoldered and the track comes away with the pin (don't do this either). 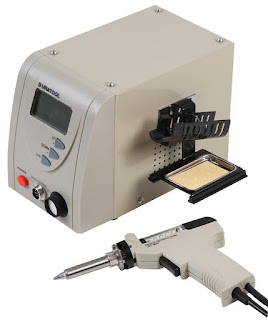 When working on board like this, I highly recommend a good desoldering station. This is the one I use, a Duratool D00672, although the same unit as available with various different brands on it, often with the part number ZD-915. With lots of flux and a bit of practice, you can get really good results. I find the ChipQuik flux in a syringe is good for this. 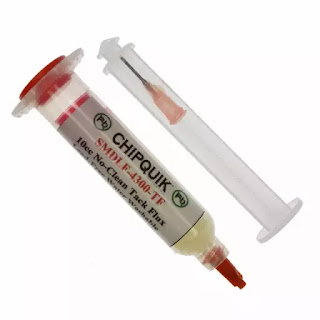 With a good dose of flux on the board, you can apply the desoldering iron, leave it there for a second or two to heat, and then move the end around a bit to loosen the pin, and finally pull the trigger and clear all the solder away. The flux helps to allow the iron to move around without scratching the board. You sometimes see people using these on videos where they pull the trigger straight away. That can clear the solder on the solder side of the board but leave the unmelted solder on the top side of the PCB intact. I prefer to let it flow on both sides of the board before pulling the trigger, seems to get a much cleaner result and the chips literally fall of the board. 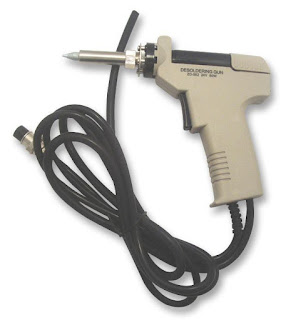 I am quite a heavy user of the desoldering station, so I find then gun eventually gets blocked to the point it can't be cleared by any of my usual arsenal of blockage clearing tools, and I end up buying a replacement element or whole replacement gun every year or so (approx £10 for the element or £20 for the gun, not bad annual running costs). When I got this one, it introduced me to a new concept, emptying the container when it was full. My previous desoldering stations usually got blocked so frequently there was never time for it to get full. 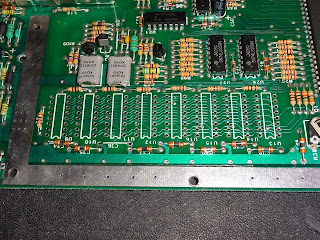 With the rest of the chips removed, the board cleaned up nicely, no damage done. I have checked the continuity and it all sees fine, but if there are any suspect areas, it is good to go for turned pin sockets or (soldering the replacement chips directly). 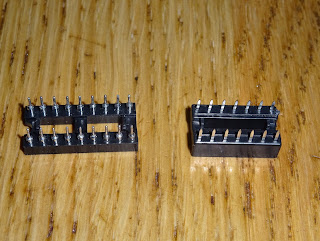 Turned pin sockets contact the pad on the top of the board and allow solder to flow on both sides, useful if the through hole plating has been damaged, or a pad has dropped off the bottom of the board. The normal socket type on the right has the thin flat metal pin which makes no contact on the top side, which does at least make them easier to desolder. 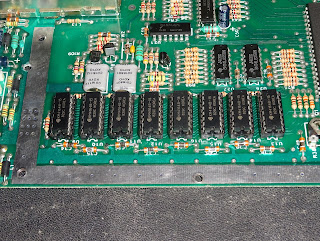 Here the owner had supplied normal sockets with the replacement RAM chips, so I used those since the continuity tests were fine. I also borrowed one of those glass decoupling capacitors from elsewhere on the board and replaced that with a standard ceramic one where it would be less obvious. 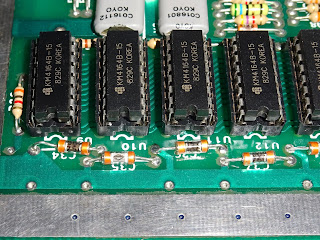 With everything back together, time for some testing, and the Atari's very handy built in tester. My only complaint is it shows 48 blocks, one for each 1K of RAM the Atari uses (16K being hidden behind the ROM and not used). It would be better if it showed any faults on the bit level, so you know which of the 8 chips is faulty, rather than just saying "there is a fault at exactly this address on one of the 8 chips. Over to you to find out which one." 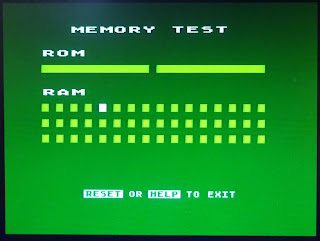 To start this, you need to hold down the option key on power up. If you don't have a keyboard connected, I usually cheat and use a bit of wire. 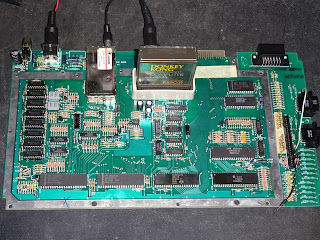 I left that cycling the memory test for a while and it continued to pass the test, so this 800XL was back in the land of the living. I tried a few quick cartridge games and all seemed to be working nicely. 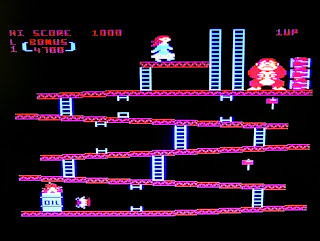