I have been investigating various Z80 CP/M machines recently, this is a nice simple one to get started with. This is a two board solution the RC2014 Mini and the RC2014 Mini CP/M upgrade kit. 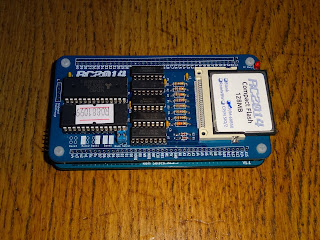 The traditional RC2014 is a handy modular Z80 system (other CPUs are available, but I'll stick to Z80 today). CP/M (Control Program / Monitor) is a late 1970s precursor to DOS, and ran on many of the Z80 based systems until the mid 80s when MSDOS based PCs took over the world. There is a fascinating (possibly apocryphal) story of why the IBM PC shipped with MS DOS rather CP/M, which seems to come down to the representative of the more established CP/M who didn't think it was worth their time attending a meeting with IBM, and some young guys from a tiny company that grasped the opportunity and got the contract. 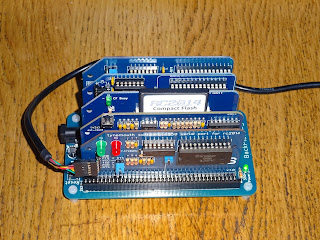 This is pretty much the minimal system you would need to run CP/M, five boards and a backplane. In this case:
(and that is using my Z80 CPU card with built in clock, if you stick to official modules, you need a sixth board to provide a clock) 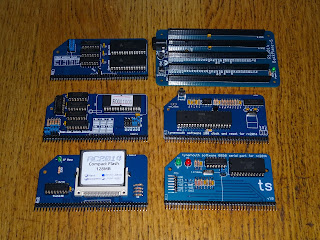 The new kit starts off with the already reduced RC2014 Mini. The Mini combines the Z80 CPU, a clock, 32K of RAM, 8K of non-pageable ROM and a 68B50 serial interface. 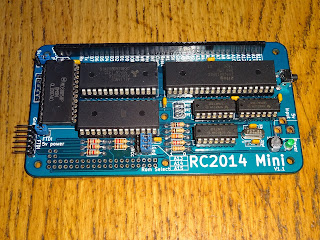 On it's own that is a nice little Z80 system that runs BASIC via a serial terminal. 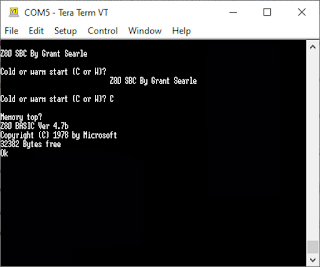 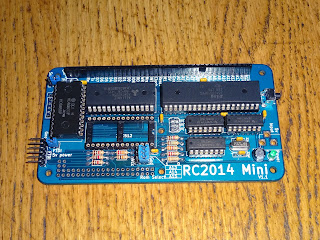 Now we come onto the new board. I like the packaging, a laser cut piece of cardboard protects the IC sockets in transit. 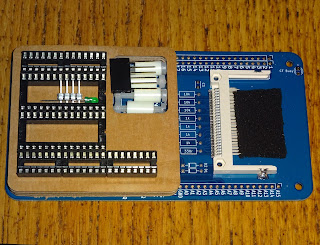 The new board is the same shape and size as the original RC2014 Mini, and is designed to sit on top of it. 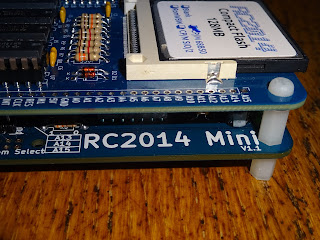 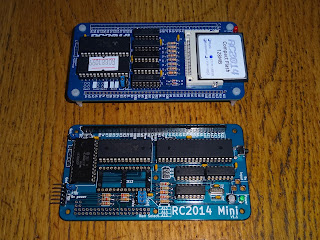 The Z80 boots from address 0000, so there needs to be a way to get CP/M loaded and running, and so there is a ROM chip which can be switched into that address range at boot time. 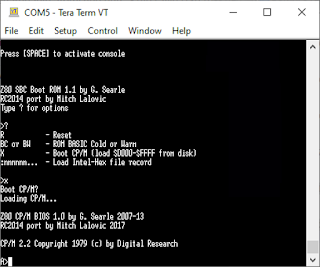 This boots to a monitor program from which you can load code over serial direct to RAM (which is only required if you are setting up your own compact flash card from scratch). There is also a menu option to boot BASIC. That doesn't work with the supplied ROM, but you can select the BASIC only ROM with the jumpers. (The hardware should support it, but it needs a version of BASIC compiled to run at 2000 and use the 68B50 ACIA) 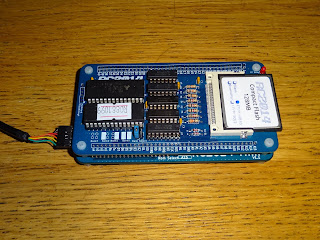 When the X option is selected, code is copied from the CF card into the top of RAM, then the ROM is switched off leaving just RAM and CP/M is booted. 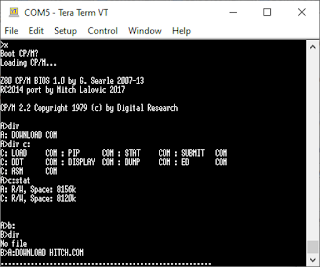 Once booted, you have access to the CF card as a selection of 8MB disks. A: contains only a download program, and C: has a selection of utilities. You can use download to transfer your favourite programs onto these disk images. 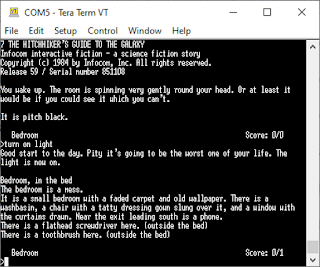 Such as the Infocom Hitch Hiker's Guide to the Galaxy or Zork. 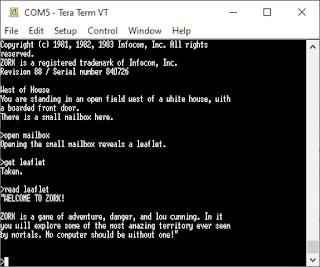 And there is also a version of Microsoft BASIC 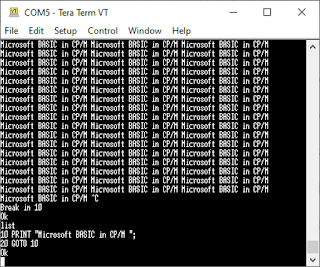 So that's the RC2014 Mini CP/M upgrade kit, a nice easy way to get a minimal CP/M system up and running. 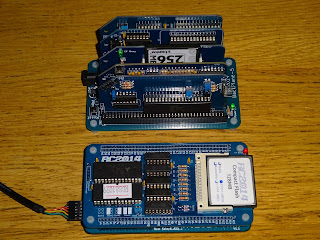 2022 Update: RC2014 continues to be very popular, they can now be ordered from the sellers new store z80kits.com
Posted by Dave Curran at 10:14