I get quite a lot of requests to build custom PC's, normally based on the best spec for a particular budget, or simply a requirement for a gaming PC or an office PC etc. I usually put together a parts list based on past experience of combinations of parts I know work well together, and manufacturers I trust. Recently I had a request where the spec and even the parts list were provided, so I was basically putting it together and testing it. This was quite interesting, as many of the parts were not ones I would normally have used. The main difference I noted was in the case, a Cooler Master Elite 431 Plus case, which is one of their higher end models. I normally stay away from cheap cases and go for manufacturers like Corsair and Fractal, where I know what I am getting, and I know I'll get an good end product. 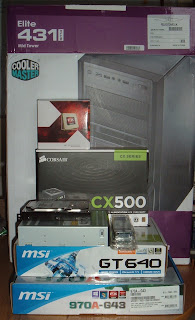 So, here we have the assembled parts. The system was based on an AMD FX6350, with an MSI 970A-G43 motherboard and an MSI GT640 video card. 8GB RAM, a 1TB hard drive and a DVD-RW drive completed the list. I upgraded the power supply from the one specified to a Corsair CX500, as cheap power supplies are never a good idea. 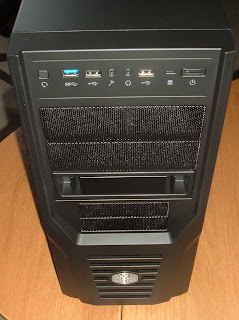 On first impressions, the case looked OK, less 'bling' than many at that sort of level, apart from the side panel window, but overall fairly neat and tidy. The front panel had 2 USB 2 connectors and a single USB3. I'm never sure why they do that. I remember the first cases with USB 3 support had a single port, and a USB 3 plug out the back to plug into the motherboard or an add on card, but this one had an internal USB 3 header. The internal header is capable of supporting 2 ports, so I'm not sure why they have missed out the second one - seems a bit of a waste, although I've seen this in cases like the Fractal Arc as well.

The 'plus' element by the way, appears to be the SATA docking bay at the front. This is designed for 3.5" drives only, 2.5" drives fit electrically, but there is nothing to support them mechanically. 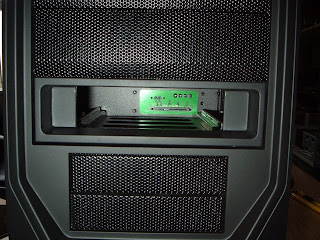 The drive when fitted is fully recessed, so no danger of it being knocked (as with some of the SATA drive bays I reviewed previously). 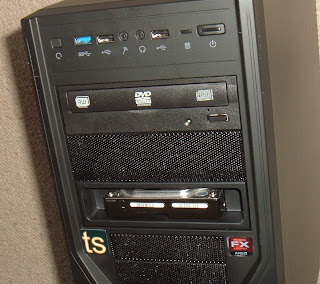 My main complaint about the case is the lack of cable management. The cases I normally use have good clearance on the back panel, so the cabling call all be neatly routed around the back of the case. Not only does this look neater, it's better for air flow as there is nothing to impede the air from the front fan. This was not an option with the Cooler Master, so the cabling is all on show. 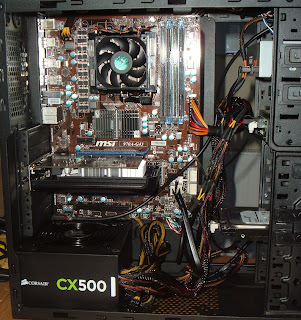 Unfortunately, there is no room on the rear tray for any cabling: 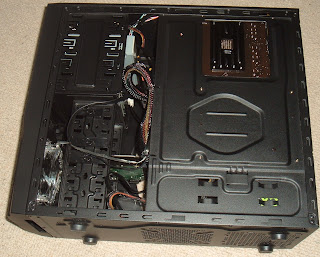 Compare the CM Elite 431 Plus above to a similar system constructed in a Corsair 600T below. 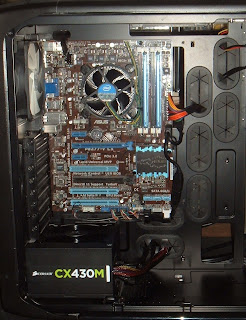 The majority of the cabling has been passed through to the rear panel, thus leaving the front clear. I also removed the hard drive cage on the 600D and mounted the single SSD to the base to further improve airflow. 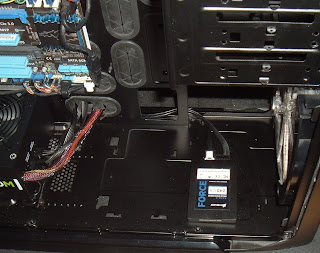 Here is the final product, a lot of the wiring is visible through the panel, as is the green PCB of the SATA dock, I think I would have preferred a plain side. 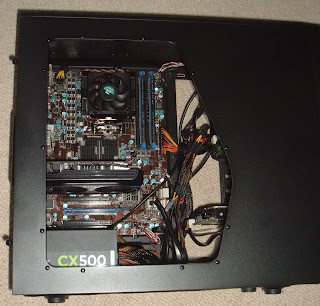