As I have mentioned before, the Achilles heel of many vintage computers are custom chips. These PLA (in Commodore terminology) or ULA (in Sinclair terminology) chips were a way to reduce cost and size by combining the functionality of a number of logic chips into a single package. Sometimes doing simple address decoding (as in many Commodore machines) and also generating sound and video (as in the case of the ZX81 and ZX Spectrum, Acorn Electron etc.). 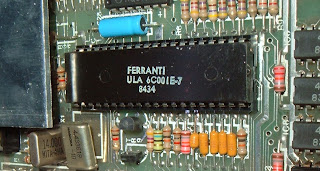 The trouble with these is they tend to run hot and eventually fail, and replacements they haven't been produced in the last 20 years, the so lead to the demise of many machines. 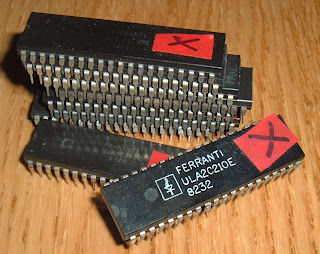 Over the years, many methods have been used to replace these. The Sinclair ones contain a lot of functionality, so replacement is quite complex, as in my ZX81 Clone. 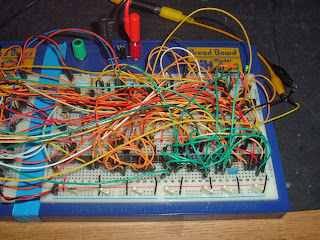 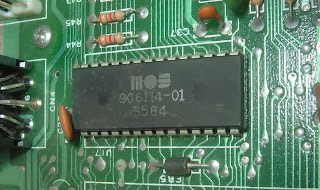 Many people have suggested an EPROM could be used to replace this, the one I followed was here (in German) The pinouts aren't exactly the same, so a few pins need to be redirected. I built a simple adapter for this. 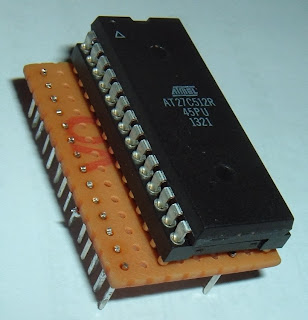 I used a wirewrap socket, pushing it part way through and then soldering it, before cutting of the pins and soldering the remainder two holes to the left as the EPROM socket 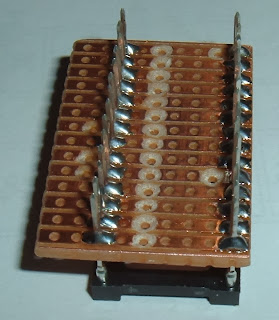 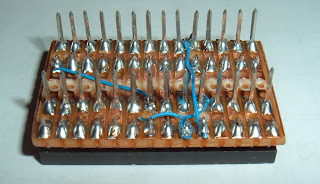 Here we have a Commodore 64 which is working except for the PLA. It has been tested with a working PLA, and all is well, so time to try out the replacement PLA. 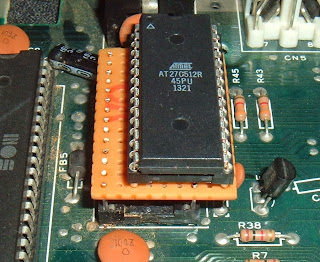 I used a one time programmable version EPROM (an Atmel AT27C512CR-45PU), as these seemed to offer appropriate timing of 45mS, and others had reported success with these. 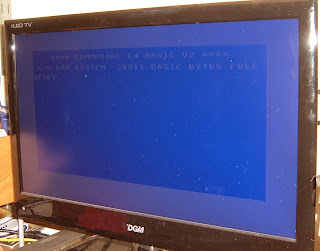 First off, it looked promising, the system ran for several hours. However, I noticed the SID had been getting rather hot. I went back to a working PLA and ran it for a further couple of hours and the SID ran as normal (which is still hot, but not as hot - must get an IR thermometer). I think this is related to the timing issues. It is possible that certain combinations of outputs may be enabled at the same time during the short time the EPROM is in its intermediate state before the data lines settle down. There is no timing element or enable mechanism to stop this happening.

So, it looks like this isn't a viable long term solution. I think I'm going to try building a replacement with a couple of 20V8 GALs next.

UPDATE:
I've has good results with EPROMs and a capacitor to alter the timing slightly, also a nicer PCB 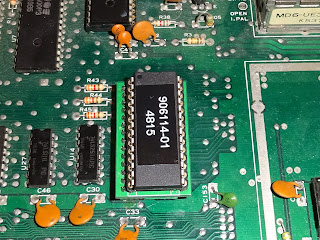 Sometimes it seems you can never tell what you're going to get from ebay. This one looked to be a nice, non-yellowed VIC20.

However, all was not good with the photo of the rear of the unit.

Oh dear, looks like this has been sitting in water and the screws had rusted

I was expecting this to be over the whole board, and the thing would be a write off. 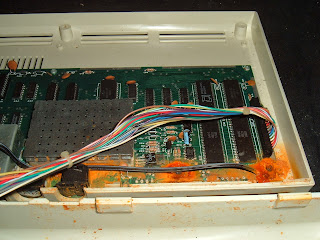 However, it seemed to be limited to the edge of the board, to the screws and the metalwork. 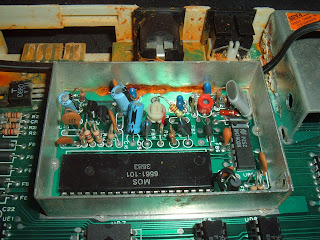 I wondered if it could be saved, so I took out the board and had a go with a solution of vinegar and water. 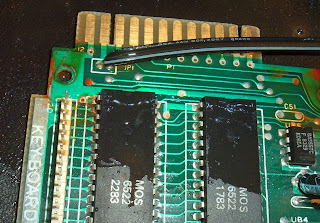 It seemed to clean up very well, so I removed the metalwork and a few discrete components and cleaned up the rest of the board. 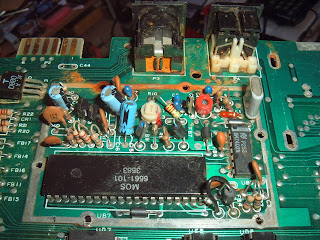 Most of the board cleaned up quite well. I later reflowed the solder on those tracks to get rid of the remainder of the corrosion. 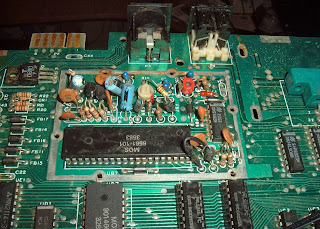 The metalwork was quite corroded, so I replaced it with a shield from a scrap board. 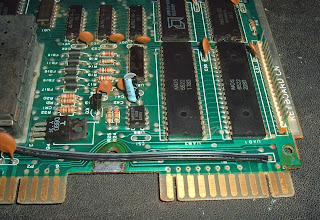 Now that all the corrosion had been cleared up, I was back with a VIC20, ready to test. 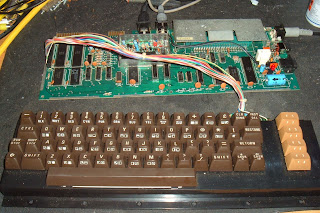 Black screen. Oh dear. Well, now onto the usual VIC20 repair routine. Nothing was running hot (apart from the VIC as usual), reset was happening, the clock was running, and the keyboard was being scanned. So I hooked up a 1541 disk drive and tried some 'blind' disk commands. So even though the screen was showing nothing, typing

resulted in disk access. So this was going to be an easy one. The machine was running, just the display that wasn't happening. So, it was the VIC or the possibly the video memory. Neither of those were socketed, so I tried the VIC first, removing the old chip and replacing it with a socket and a known working chip

Powered it back up and voila, one ready screen. 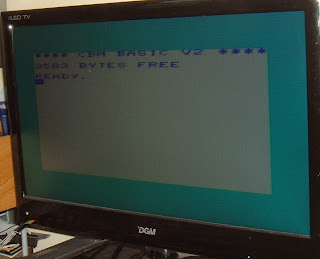 After that, it was onto giving the case a good clean and sorting out the rusty end panel.

All reassembled, it cleaned up rather well. 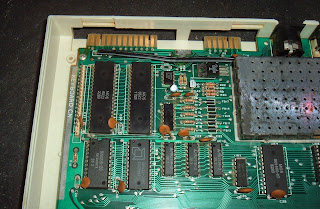 It's one of the whitest VIC20's I've seen

A nice addition to the collection 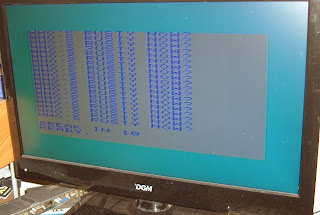