A laptop in for repair had stopped working 'after something was spilled on it'. Oh dear, looked fine from the outside, but inside it wasn't a pretty site. The battery had been left in, and power had been applied and the motherboard looked like an example of electrolysis in action. There was much corrosion around the power input and charging circuits. Anything which had a decent voltage across it had suffered. Some was just superficial staining, but several places the pins and tracks looked to be corroded away. Not much hope here I am afraid. 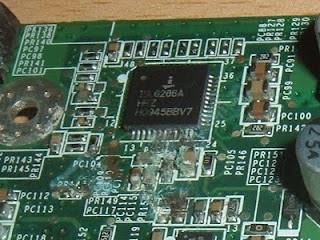 The moral of the story here is if your laptop does get wet, take the battery out and unplug it until it has thoroughly dried out.
Posted by Dave Curran at 15:03

The second repair was an eMac, a G4 mac in the old iMac style. The kept freezing, not the usual fault screen, it would just stop. Software problem perhaps? I tried my usual trick of booting up to Ubuntu to bypass any install OS (and related problems) and this seemed to run fine for a few hours. This machine was donated as a faulty unit, so the data on it was to be wiped, and we didn't have the admin password, so it seemed a good opportunity to reinstall.

It would have been supplied with a CDRW / DVD combo I believe, and Ubuntu picked it up as that, but it didn't like any of the DVD's I tried, and would spin them around for a bit then eject them, so I installed Tiger from an external DVD. This was looking good and ran for a few hours (after doing what seemed like and endless series of Java updates), but then froze again. I did think it might be overheating, but it froze again shortly after a cold boot the following morning.

I knew I had to replace the optical drive, so I dismantled the unit, and gave it a good clean. I took the opportunity to test the memory in another pc - that was fine, so that wasn't the problem, and I removed and DBANed the hard drive to clear the data.

Whilst it was apart, I noticed some of the capacitors had bulged, and when I looked further, five of the nine 1800uF 6.3v capacitors were either leaking or bulging. So, to save possible future problems, I replaced all nine. The other caps on the board with from a different manufacturer, and seemed intact, so I left them alone. 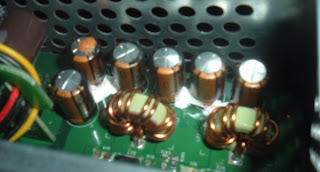 Once reassembled, it booted up fine (I'd swear it was also faster) and has been solid so far. I've even upgraded it to 1GB and installed Leopard.
Posted by Dave Curran at 08:53

I've had a few repairs in this week. The first was a laptop that appeared to be completely dead, wouldn't turn on, no lights or anything. Charger was tested and working, so time to dismantle the unit. Inside I found the power socket was surrounded with hot melt glue, and this appeared to be a previous repair which had now failed. The power socket was actually in pieces and the central pin was no longer making contact with the board. I fitted a new DC socket and put enough of it back together to test it, and up it powered straight on.

There seems to be some possibly related problems around the power area, as it fails to successfully charge a battery. Either that or the two batteries I have tried are both duff.

I've been working on a data recovery case for the last few days. A collection of family photos on a USB hard drive. The hard drive has presumably been knocked when spinning and has had a head crash. All it will do now is click as the heads go back and forth searching for track 0. I've tried a few of the usual tricks, but I can't get the drive to initialise at all. It is normally possible to recover most of the data from a drive if it will at least start up, but when there is significant physical damage and it won't do that, it's time for clean rooms and microscopes - a bit out of my range.

Luckily in this case, the hard drive had been used to copy the photos from an ailing laptop which had since been retired to the loft. I was able to extract the drive from the laptop and recover a lot of the pictures. They had been deleted, so some had been overwritten, but many had survived. The client also had copies of some of the pictures elsewhere, so not as bad as it could have been.

Just another reminder to backup really, we all rely far too much on tiny pieces of magnetised rust spinning at 7200 RPM!

Visit www.tynemouthsoftware.co.uk if you have any data to be recovered.
Posted by Dave Curran at 09:40