A number of Asrock boards come with a 4 pin header labelled 'CIR'. The manual includes diagrams showing how to connect a special receiver using a front panel USB connector, but most boards do not come with the receiver or remote.

Since the device looked more than just an IR receiver, I had left those alone in the past, expecting they required that particular device to work correctly. However, I have recently purchased an Asrock Z68M-ITX/HT board which does come with a receiver. 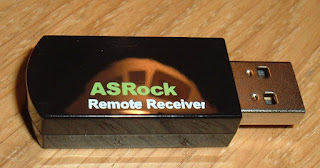 At first glance this looks like a USB device, and indeed it does use a USB connector and plug into a front USB socket. But you are meant to move half of the front panel USB 10 pin connector so it takes in the CIR header and 1 of the USB ports.

Installing it doesn't show anything on lsusb on linux, and there is no new device detected under Windows  because it isn't USB. Inside are two standard 3 pin IR receivers, another sideways one and two SOT23 chips.

The two chips turn out to be AND gates, so it makes a quite neat little circuit, three active high IR receivers whose outputs are ANDed together to make a single active high IR signal. This is fed through to a Nuvoton W836x7HG CIR receiver, which is supported out of the box by LIRC in recent kernels (certainly works on my Mythbuntu 11.10 boxes). It is supported by the 'Acer Aspire 6530G_MCE' driver. I haven't gone through a full keymapping as yet, but most of the keys map to the Acer ones.

One very useful part of this is BIOS support of power on by CIR, so with the adapter in place and the BIOS option 'Power On By CIR' enabled, you can switch on the PC using the remote. Nice.

As good as it is, my main issue is that it isn't really convenient to have it hanging out of the front USB port. 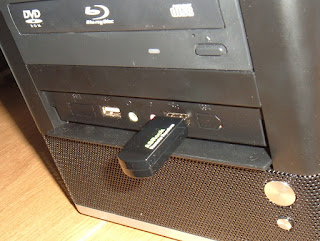 So I thought I'd see how it worked wired direct to a standard TSOP4838 receiver. I wired one up using an old CDROM audio cable, with the ends de-pinned and rearranged appropriately. 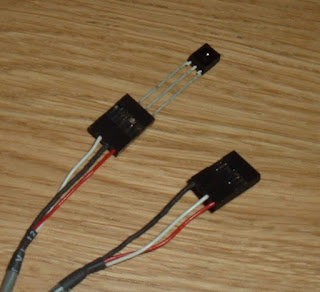 This worked fine under test, but the receiver wasn't particularly solidly held in the socket so I soldered the device onto the cable.

I then glued it to a suitable gap behind the mesh on the front of the case. 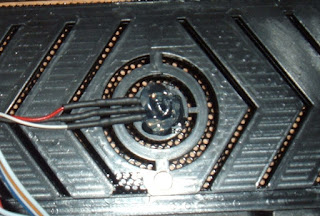