I've been looking further at this unit and have decided to rehouse it in a bench power supply case and add some additional features.

One useful thing in a supply like this, particularly when testing laptops, is an ammeter. This will show if a laptop is charging, and indeed how much it is drawing from the supply. I've also been looking at the voltage selection and the low voltage feedback side of the supply. It uses a potential divider across the output, 10K at the top and the bottom is one of a selection of precision resistors, chosen by the position of the switch,  ranging from 1240R to 1910R. The centre of the divider is used to drive the LED on the opto isolator back to the mains side. 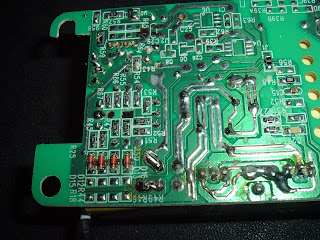 The original selector switch is 11 position, and the lower 4 have an additional signal diode in series with the resistor. This seems to be needed to keep the overall resistance in the same range, by knocking 0.6V off the LED voltage. 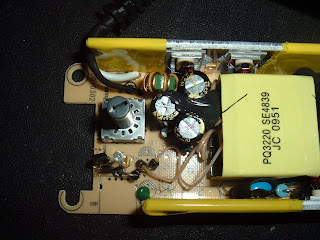 In rehousing it, I did think about removing the existing switch and wiring a replacement from the front panel, but I thought I could probably just replace it. I did a bit more maths to work out the best replacement resistor values, and could make reasonably close to most of them with a combination of 2 standard E24 1% resistors. In the end, I thought if a job is worth doing, do it properly, so I went for a 12 way switch with 12 500R multiturn pots and approximate values to set the desired values mid range in the pots. I used multi turn pots for the best accuracy, and ended up with about +/- 1V adjustment on each one which has left me lots of room to set them as accurately as possible. 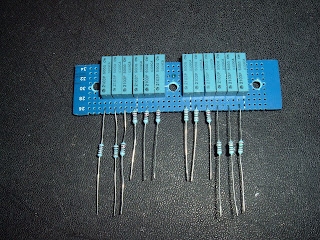 I thought I may as well use the extra position on the 12 way switch, so I added a 24V range, I also changed two of the lower ranges from 14V and 15V to 13.8V and 14.4V as these seemed more generally useful. 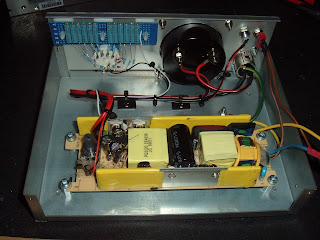 I would normally use 4mm terminals for something like this, but I wanted to keep the original cable, which is a single piece of coax, so I went for a 3 pin XLR connector for the output, more than sufficient for the maximum rated current. 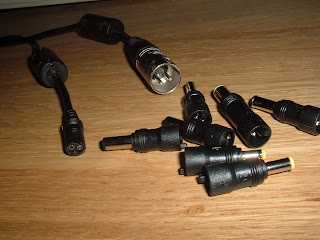 So here is the finished unit, temporary labelled in pencil.

I've been using a 'Universal Laptop Power Supply' for the last year or so to test laptops where either the owner hasn't brought the charger or there is potentially a problem with theirs. It seems to do the job, it's a 120W unit with selectable voltages from 14V to 22V, and a selection of tips that have suited every laptop I've used it with, except for one old Dell laptop.

Recently though it's been making a buzzing noise under load. Not necessarily a problem, but it's been getting louder and more annoying. So, I thought it was time to take it to bits and see what makes it tick (or rather buzz).

It seems to be fairly well made compared to some units I've seen. There is some unpopulated area at one end, which appears to be a 5V USB charging supply option not on this model. 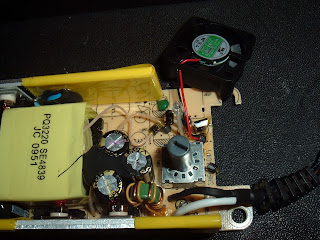 Turns out the fan on there was making the noise, an 8V 30mm unit. I've removed it and tested it on a bench power supply, at 8V and it runs fine, as noisy as expected from a small fan, but not as bad as it had been inside the PSU. It seems it was being driven by a voltage which slowly rises with load, and at about 3-4V it is trying to start but fails to spin and just sits there and buzzes. Not a very good design really, it shouldn't be run below a safe guaranteed starting voltage, in this case, about 5V.

UPDATE: Comments disabled on this post as it seems to attract a lot of spam.
Posted by Dave Curran at 14:12