I frequently need to be plugging various hard drives into test machines, to wipe drives, to perform external disk tests and virus scans, and for data recovery. So one thing I used a lot is an external SATA dock. For the last couple of years, I've been using a pair of Akasa Duo Docks (AK-IC008-BK). I've found these very solidly built and useful. These sit on the desk and plug into the PC via an eSATA port, although there is also a USB 2.0 port. There is a slot on the top to insert 1 3.5" desktop or 2.5" laptop hard drive or SSD (but not at the same time as they share the connector). Then thanks to SATA AHCI hotplug, these appear as additional drives to the PC. Where they can be wiped, scanned etc. 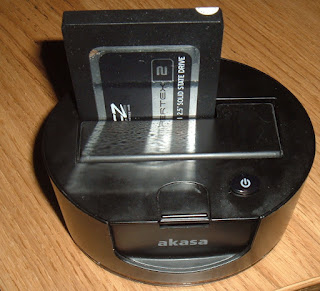 These, along side the IDE version I built a while ago, have served me well. But with SSD's becoming cheaper and therefore more prevalent, I've noticed I'm not getting full speed out of them. Further investigation has shown that the USB 2.0 port is the problem. Whilst on some external drives, there is a switch to choose between eSATA and USB, this uses a chip, and that chip seems to be limited to SATA 1. So even with the a SATA 2 or 3 drive and a SATA 3 capable motherboard, I'm seeing speeds limited to around 150MB/S rather than the 500MB/S some of the SSDs are capable of if directly connected to the same motherboard. I've had a look inside, and there doesn't look to be an easy way to bypass the USB (which I don't use), without cutting the tracks and trying to bodge what are meant to be balanced impedance tracks. So time for an alternative. 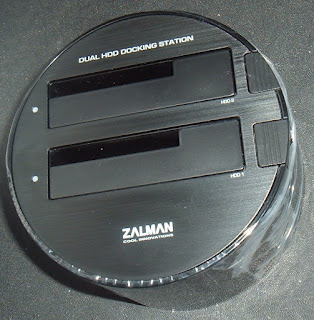 The first I looked at was a Zalman ZM-MH200 U3 Dual USB3 HDD Docking Station. Both drives in the same unit, so a saving on bench space. This turned out to be a disappointment in a number of respects. Firstly before I'd even plugged it in it came with a US figure of 8 mains lead and two, yes, two, UK mains adapter plugs - neither of which was fused. I may be wrong, but I thought it was illegal not to have a fuse in the plug? 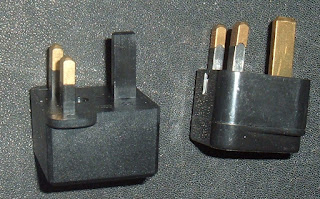 Luckily I had a box of figure of 8 leads with fused, moulded UK plugs on the end, so I used one of those. This thing supports two separate drives at a time, of either size, so was going to save me bench space. However, I assumed / hoped / expected that these would appear as two separate drives, but it doesn't seem to work like that. It goes through some 'intelligent' RAID chip which allows you to combine the two disks into a single drive with either RAID 0, RAID 1 or JBOD. Quite why you would want to do this with interchangeable removable drives, and not a fixed pair of drives inside the PC or in an external enclosure is beyond me. Possibly to be able to replace a disk if one fails (but how do you tell without a manager?) and with only 2 disks, a RAID 0 or JBOD array would be lost. However, that is how it works, and it doesn't allow the two drives to be accessed separately. There is a 'DUAL' switch, but I haven't been able to get it to reliable reliably recognise the second drive, the activity light doesn't appear and there is some confusion about which is which. Oh, and finally, this is probably a limitation of the USB hard drive support in the Windows, but it doesn't appear at all if there are no partitions on the disk, so is useless for new drives or data recovery. Time for plan B (anyone want a Zalman Dual Dock?). 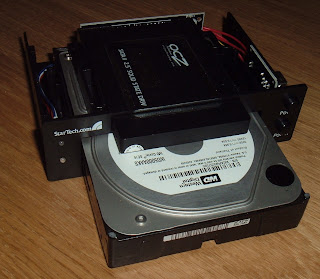 Plan B turned out to be an internal version, the StarTech SATADOCK525. So even more bench space saved. This uses a single 5.25" optical drive bay to provide 2 SATA drive slots. One for a 2.5" drive, and one for either a 2.5" or 3.5" drive. Both of which have separate switchable power and activity LEDs. These connected directly to the SATA ports on the motherboard, so no issues with intermediate chips reducing speeds or confusing things. These are pretty much exactly what I was looking for. The construction isn't fantastic, the door flaps are a little flimsy, but are easily removable if they get worse. The other issue I had is the LEDs are dual purpose, they are bright blue for power and red for activity, but the activity signal is provided by the drive and so some drives you can see a sort of purple when there is disk activity, but for most it just get washed out by the bright blue. So at some point I expect to be removing the door flaps and buffering the activity LED's. 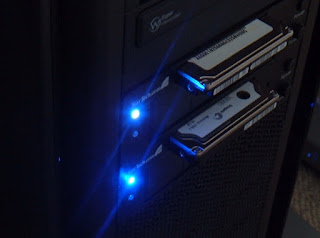 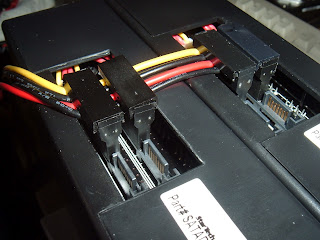 As you can see in the picture, the SATA data connectors are the type which don't latch, and since the unts were so short, the plugs easily fell out. A large dollop of hot melt glue firmly fixed those in place. And finally, all the drive bays installed in the Corsair 600T case of my test machine. 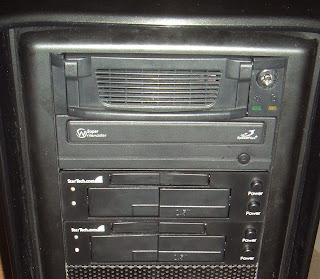