I have an existing HTPC that does fairly well with an Asus board with an Atom / Ion, and handles full HD acceptably well thanks to VDPAU support in MythTV. I now need another one, so I've been looking around at the options. The Atom / Ion boards are still there, as are the AMD Turion's as so on.

In looking around I found a few fairly reasonable Sandybrdige boards with the H61 chipset. This seems to be a cost reduced version of the H67, and is missing a couple of PCI Express lanes and SATA 6GB/s ports. So I looked at the 1155 process options and the until the Sandybridge Celerons are released, the Pentiums seemed to fit the bill, again fairly reasonably priced compared to the i3 series, but with a few features missing. The important ones like the onchip Intel HD graphics and the memory controller which gives Sandybridge such high memory bandwidth.

So I went for an Asrock H61M-ITX board and an Pentium G620 for just over £100, add 4GB of DDR3 memory and that took it to £120, which I think is less that the Atom board cost a couple of years ago. Performance wise I was very impressed, with better memory bandwidth scores than my i7 950! 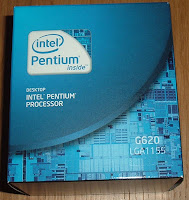 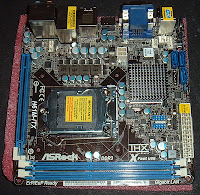 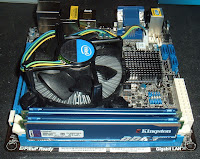 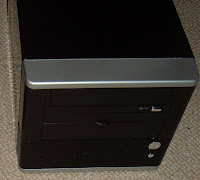 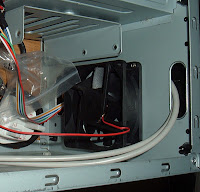 The heatsink on the G620 gives a fair indication of the amount of heat likely to be generated, so I don't think they are both necessary. As the PSU fan is the 10mm thick variety I didn't want to replace it with the same type, so I used a normal 80mm fan outside of the PSU case, using the original mounting holes, but from the other side. The three pin fan header could then be connected as a chassis fan and speed controlled by the mainboard BIOS. 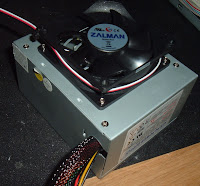 I also took the opportunity to remove the 3.5" hard drive cage as I was using a 2.5" SSD. Since the front fan was no longer present, I bolted the 2.5" SSD in its place, and also attached a couple of internal USB ports in front for the wireless keyboard / mouse receiver. It isn't the best, but putting it behind a big metal box doesn't help, so out in front, there is only plastic and air between it and the keyboard. 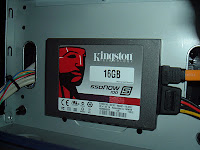 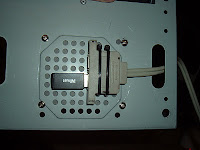 After a painless install of Mythbuntu 11.10, it found my myth backend and I was watching HD TV again in no time.
Posted by Dave Curran at 09:08