Microsoft have announced the next version of Windows, Windows 10, and have made available a technical preview. I've been running that for a few days, and from first impression, it looks like a proper desktop operating system. It has a task bar, aero effects (transparent taskbar etc.), a functional start menu, no charms etc. 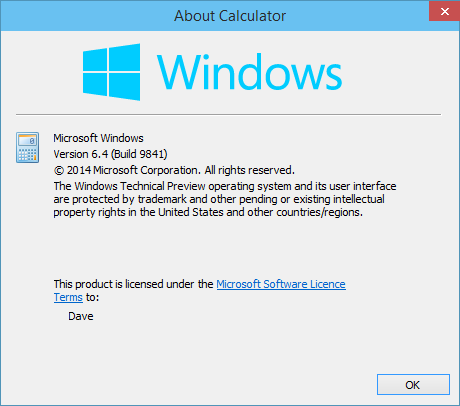 So this is version 10. Well, actually it's version 6.4. Vista was 6.0, Windows 7 went out as 6.1. Windows 8 as 6.2 and Windows 8.1 as 6.3. So this is 6.4. A lot of this seems to be down to how applications check which version of Windows is running. A lot of programs were fine in XP (that's Windows 5.1 by the way), which followed on from Windows 2000 (5.0). These programs checked the Windows version started with 5 before they ran. So when Vista came along (6.0), some programs didn't like the new major version number change, so didn't run. Since then, they have stuck with 6.x, even though they called it 7. 8 and 8.1 confused things further and now missing out 9 gives version 6.4 for "Windows 10". Mad. Oh, and why not 9? One theory I've heard is again down to version number checking again. This time programs checking you weren't running Windows 95 or Windows 98 by looking for a version string starting "Windows 9". The version numbering of later OS's comes from the NT line, where NT4.0 (the last OS to actually have the right version number!), was followed by Windows 2000 (5.0). Windows 95 and 98 were part of a different family of operating systems and didn't use that numbering scheme. 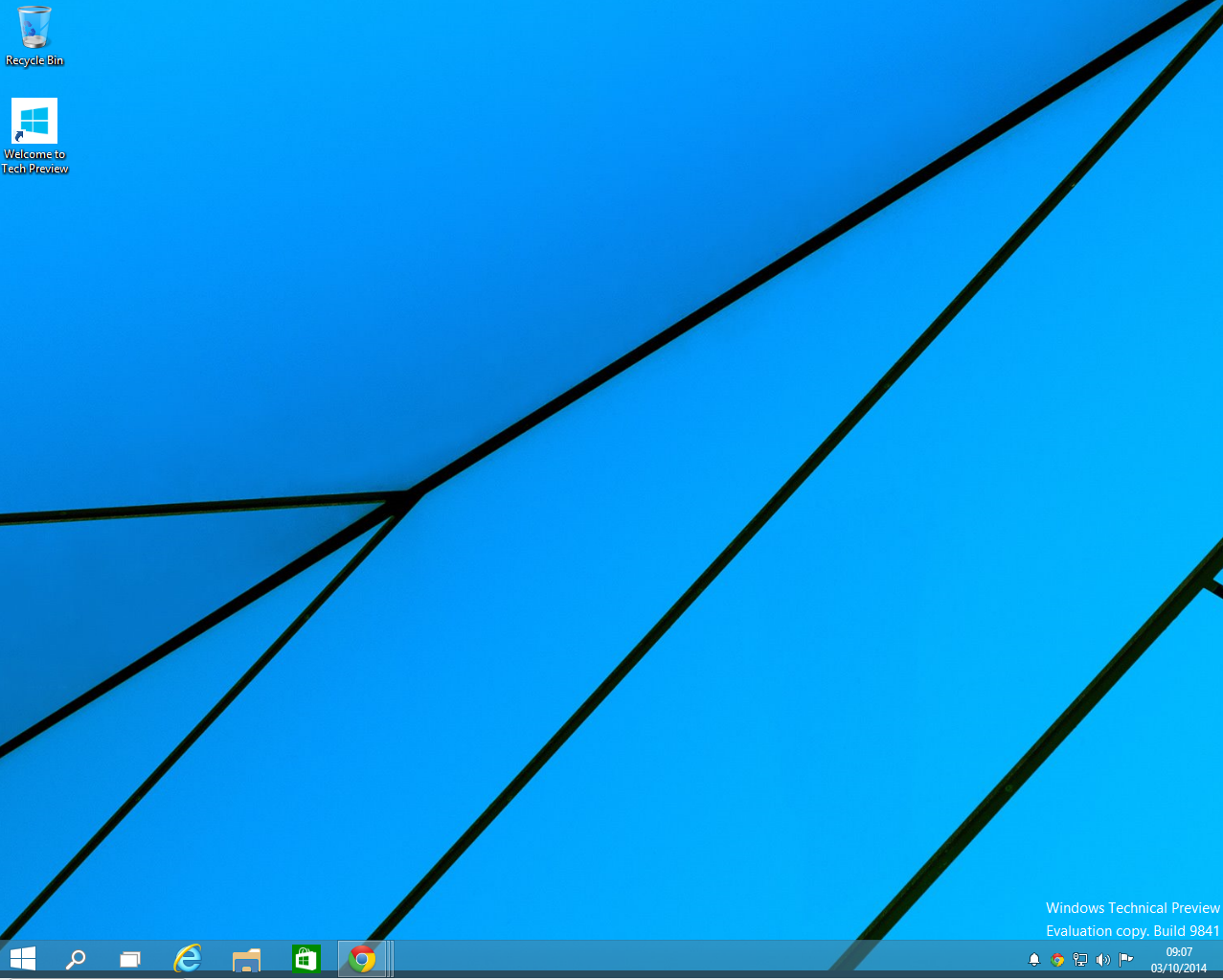 Aside from the version numbering, this may be what I've been after. I like Windows 7, and have stuck with it up to now. I've tried to get to like Windows 8 a number of times, since it's initial tech preview. I even bought it when the retail version came out, but have always gone back to 7. I have helped numerous people who bought new computers preloaded with Windows 8 and couldn't find familiar points of reference they were used to from XP or 7. There are many nice things on Windows 8, the incrementally better small internal changes, things like a better task manager, better file copy dialogue etc., but they were always offset by the major changes to the user interface with the start screen and live tiles etc. Windows 10 has kept most of Windows 8, you can configure it to run just like Windows 8, but at least on the Tech Preview, out of the box, it runs a lot more like Windows 7. 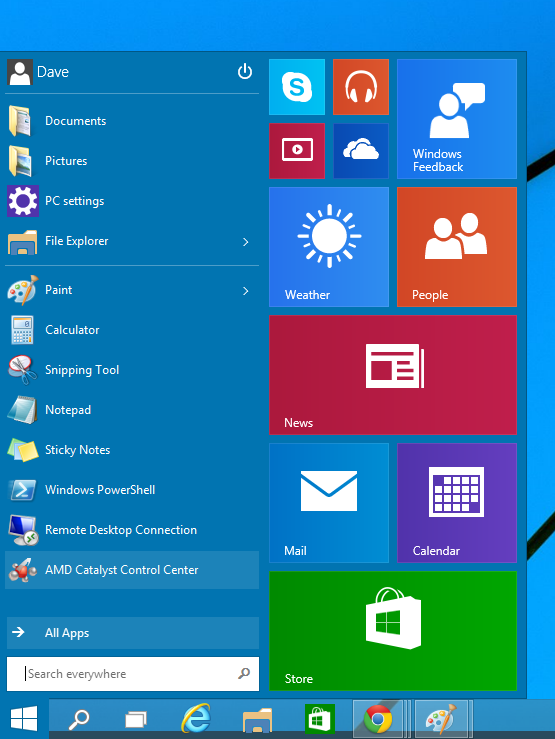 The start menu now has the tiles on the left, which can be resized, added, removed, etc. like the Windows 8 start screen. Seems to be very usable like that. Most of the general operating stuff seems to work. It detected all my hardware without a problem. It handles multiple monitors better than 8 did, although you still can't snap to the side of an individual monitor, only the desktop as a whole. 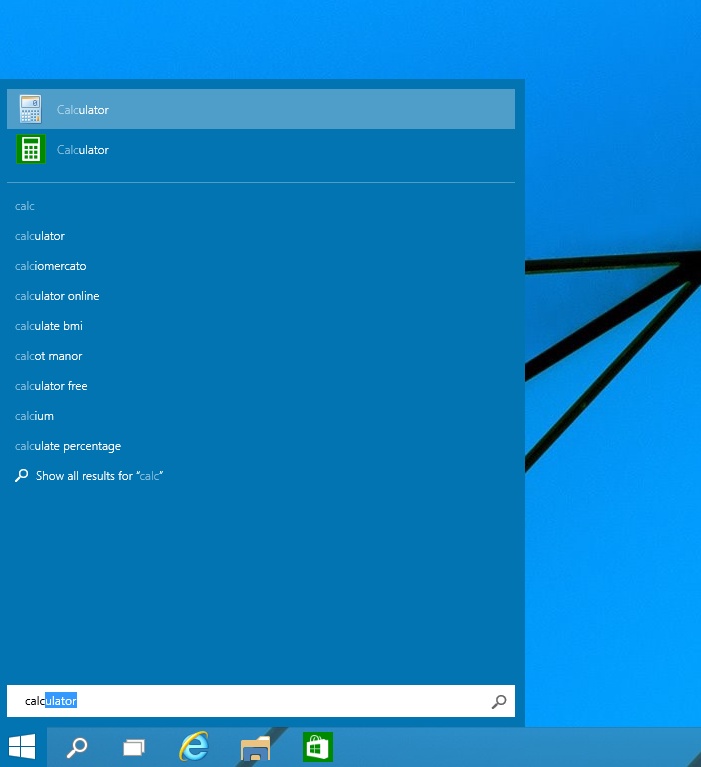 You still get the dual personality of modern Windows, so if you want to use a calculator, you can use the standard Windows calculator, which hasn't changed much since XP, or you can use the Metro (or whatever it's called these days) style app. But now, the Metro apps can run on the same screen, in Windows, appearing on the task bar, almost like it was a proper desktop app. 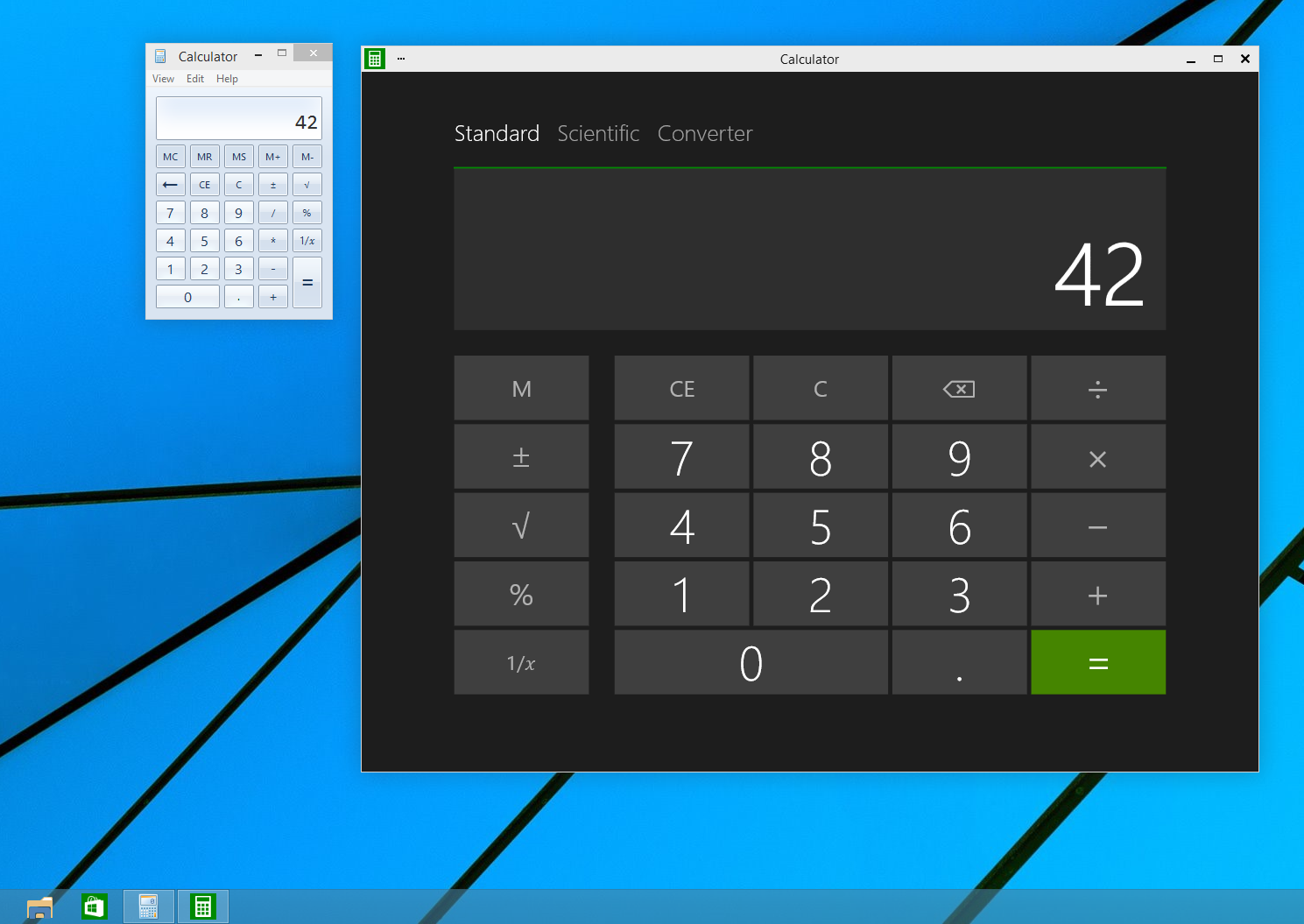 So two calculator apps, one designed for people with a big screen and a keyboard and mouse, and one for the people with tablets and fingers. So Windows 10 is bringing those more together, but it's still difficult to see why they need to be in the same OS. Microsoft is very keen to push this one OS for all devices, but I'm not sure the users really care. Do they not just want to sit with their desktop or laptop and use apps in the traditional way, I don't think they would expect them use the same apps on a tablet? To facilitate this, they seem to have changed the window chrome (lower case w and lower case c), the box around the windows, for all apps. So any apps which don't use the standard title bar, may look odd. 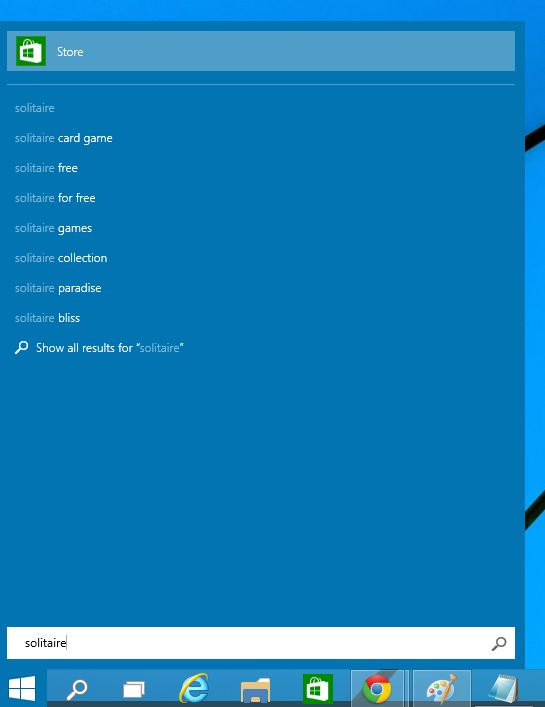 You may have noticed that internet search results are now part of the same search list, and not clearly distinguished, so you can easily end up with a website when you were looking for an app (for example, Windows 10 doesn't have solitaire - there's a deal breaker right there! So if you click start and type solitaire, you get a bing search which shows a list on online gambling websites. Probably not what you were after. 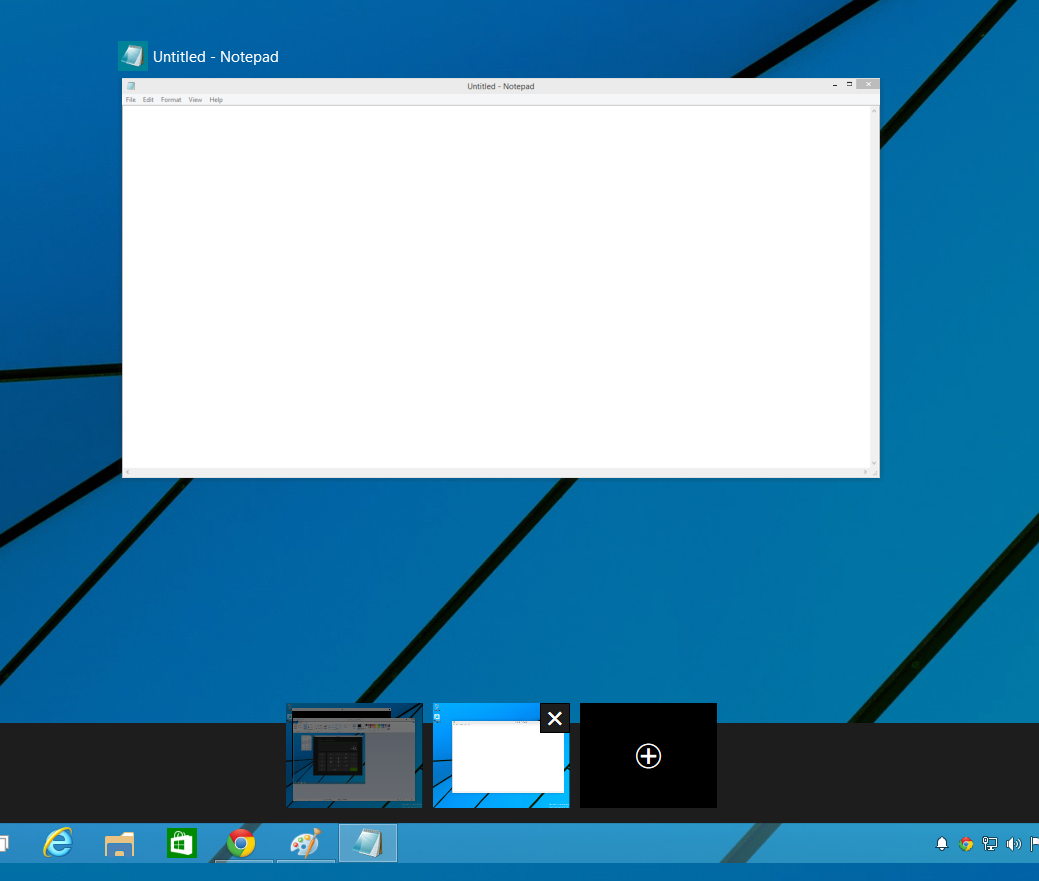 There are also multiple desktops, like Unix based system have had for decades, where you can have a whole load of apps open, and then switch to a clean desktop and open a new desktop and then switch between them, although that only shows one monitor, so not ideal if you have a multi monitor setup. There are hints that the licensing model may change, the licence agreement seemed to imply it was a licence to use the software, rather than having been purchased. I don't know if the will be the case with the retail version. 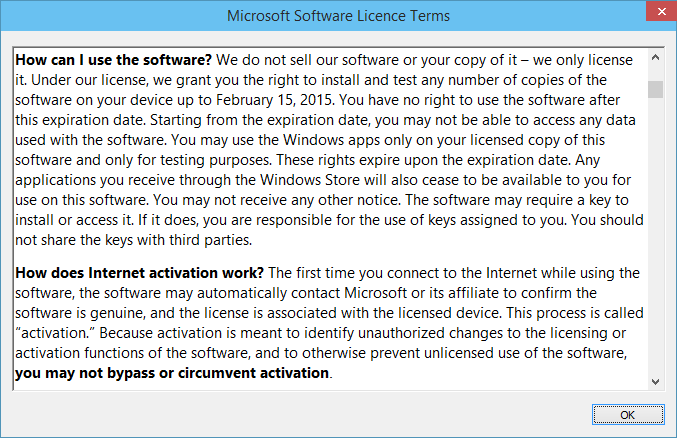 So there it is, I'm a lot more positive about this after having used it for a while than I was with Windows 8. There is a theory that every odd numbered Star Trek films was rubbish. Windows was the reverse of that, the odd numbered ones were the good ones (Windows 98SE, XP, 7), and the even ones were the ones to avoid (Windows ME, Vista, 8). By skipping 9, have they missed the good one and gone for another rubbish one, or have they fixed it? Time will tell.
2022 Update: It seems I liked Windows 10 from the off, and I used it since then (was it really 2014?). About once a year I would get annoyed by some change or other and switch back to Linux for a bit, but would have to go back to Windows 10 at some point when I was developing Windows software. I don't do that these days, so it's been a while since I ran Windows as a main operating system (other than a Windows 7 VM I keep around to run the last few bits of software that don't run under natively on Linux, or under wine).
Posted by Dave Curran at 09:56