Here are the details of the USB to IEEE-488 / GPIB adapter I have been using to test the Commodore PET IEEE-488 disk drives. 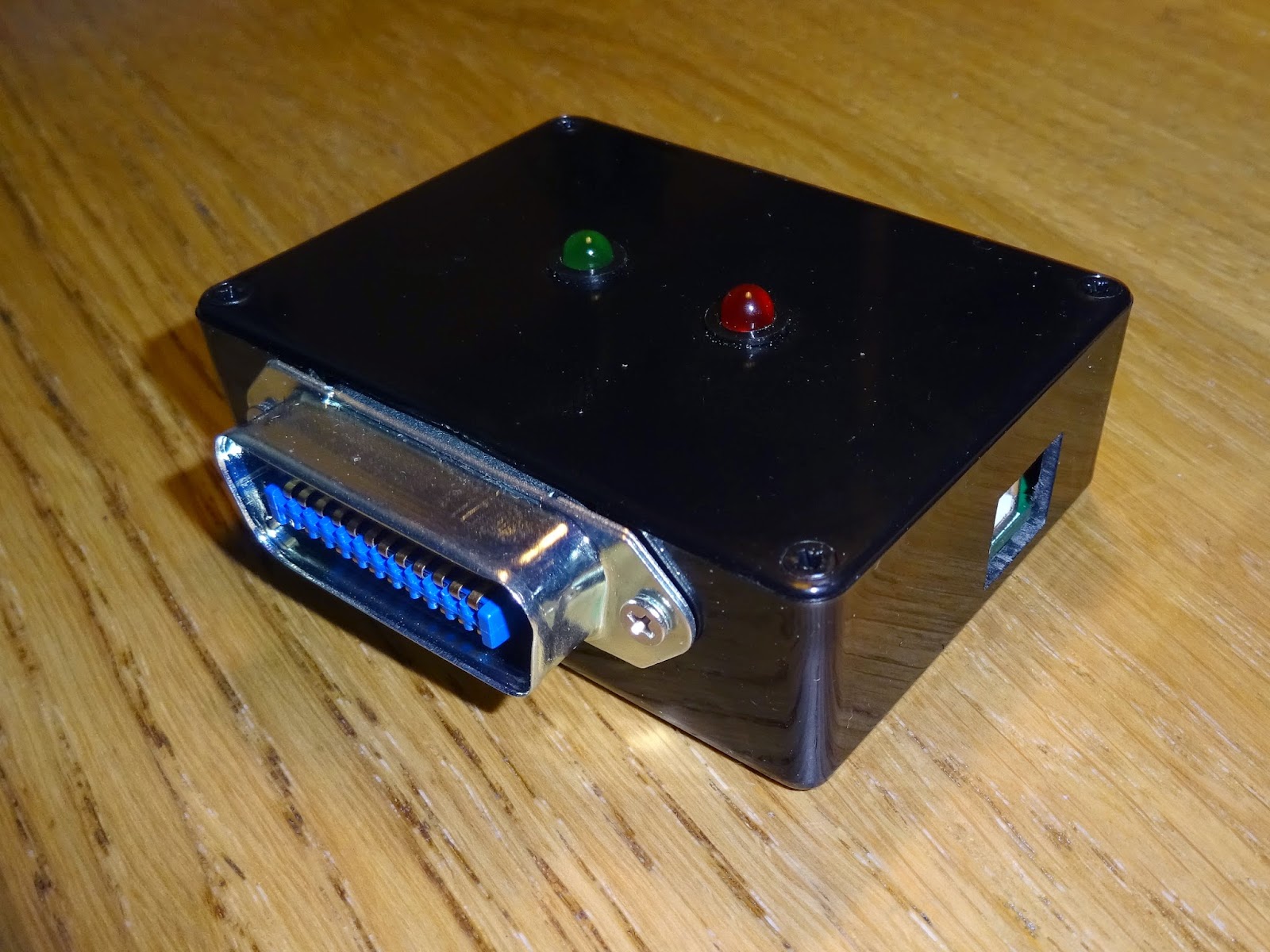 Like the USB to IEC adapter I build last year for testing Commodore 1541 disk drives, this one is based on xum1541 firmware. That needs to run on an ATmega32U2, and as before I adapted one of my USB keyboard PCBs for the purpose. The latest PCB for the ZX81 adds a sounder to click on each keypress (which makes typing easier), and a mode switch. That leaves a pile of the old style PCBs for tasks like this.

I've added a piece of padboard to add the additional circuitry, held in place with a couple of cable ties and by the resistors which bridge the boards. 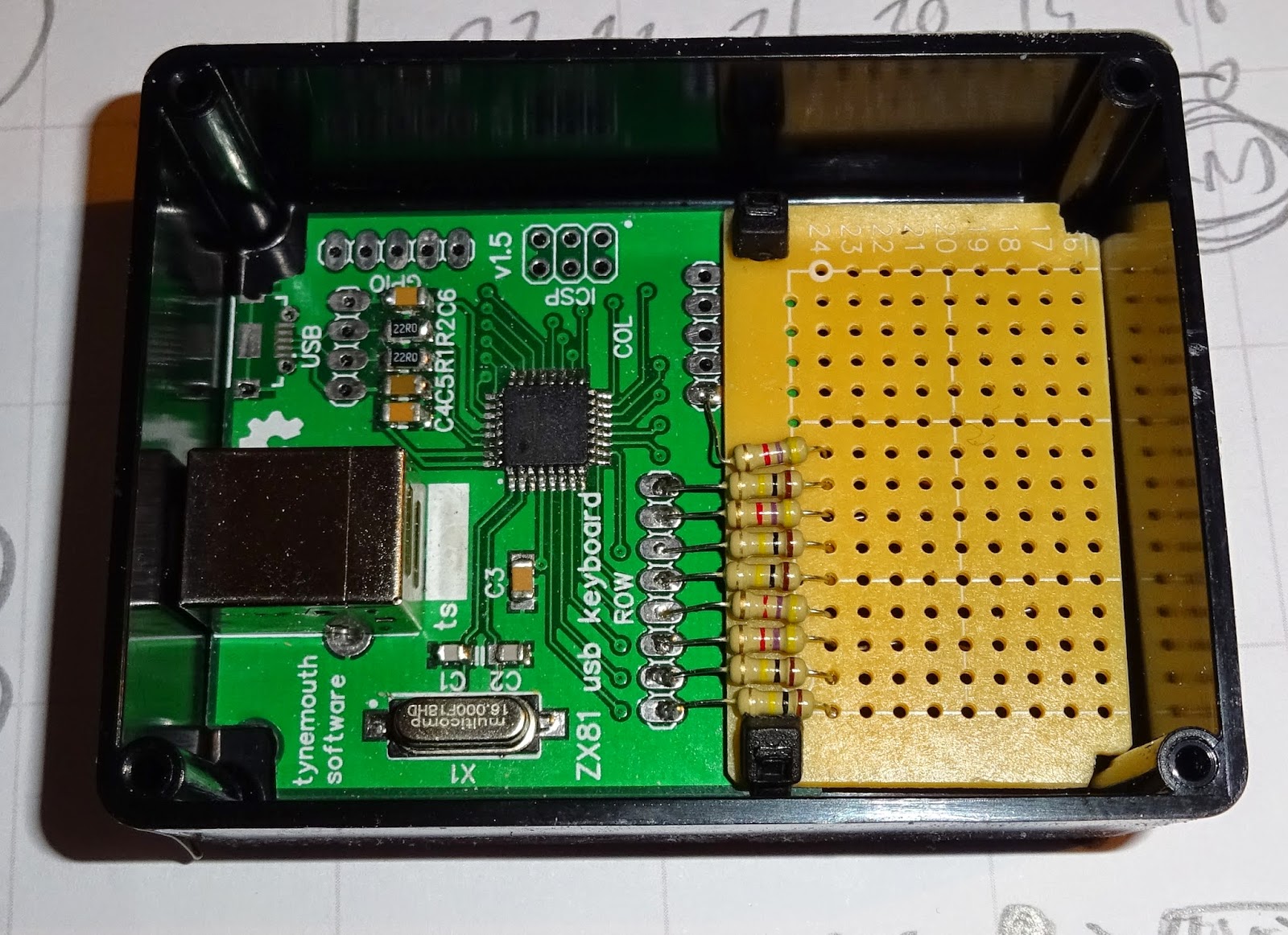 There are 8 grounds, 8 data lines and 8 handshaking lines on the 24 pin connectors, I've wired all those to short lengths of wire. 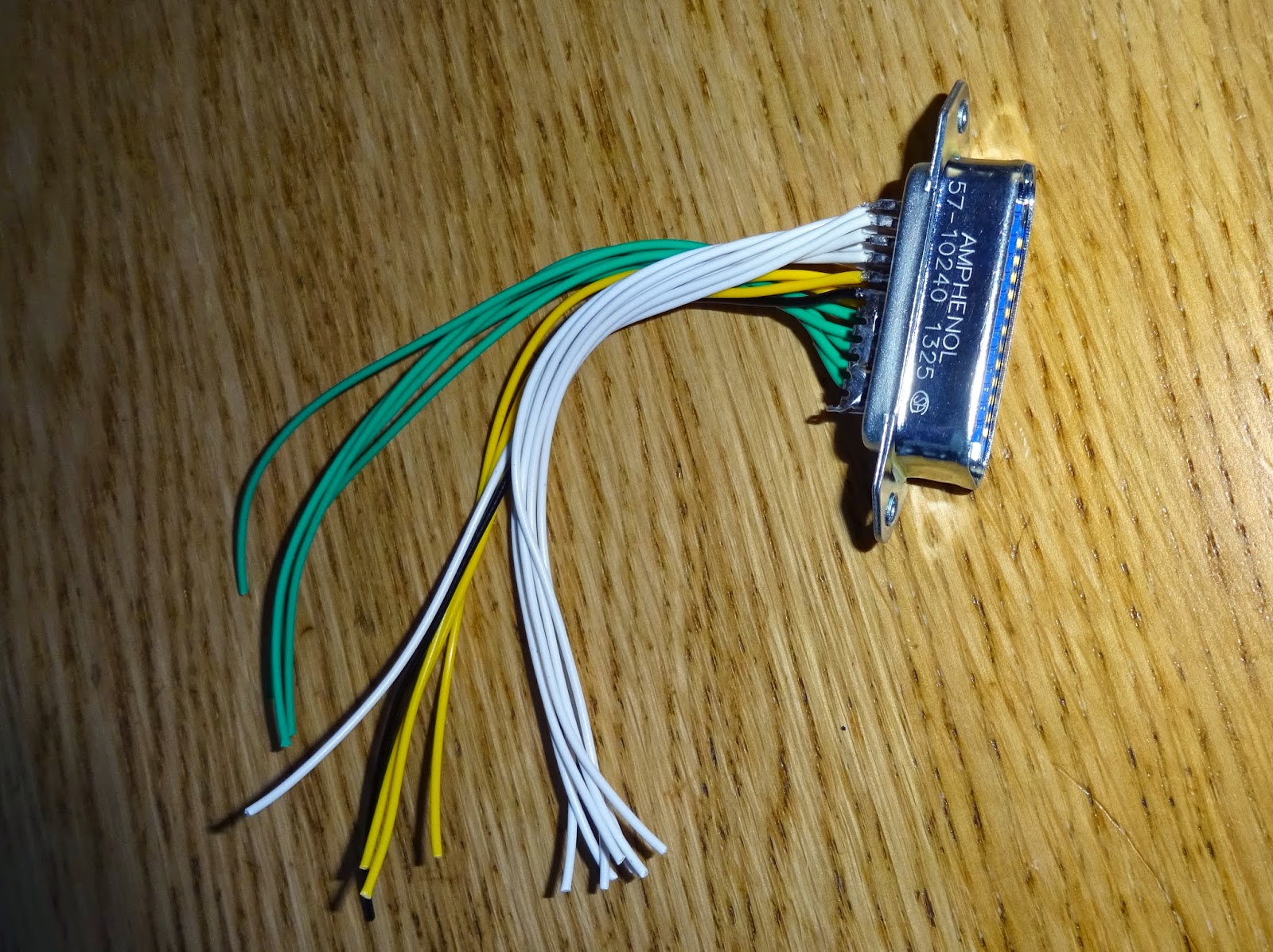 The two LEDs for power and activity fit in the lid. 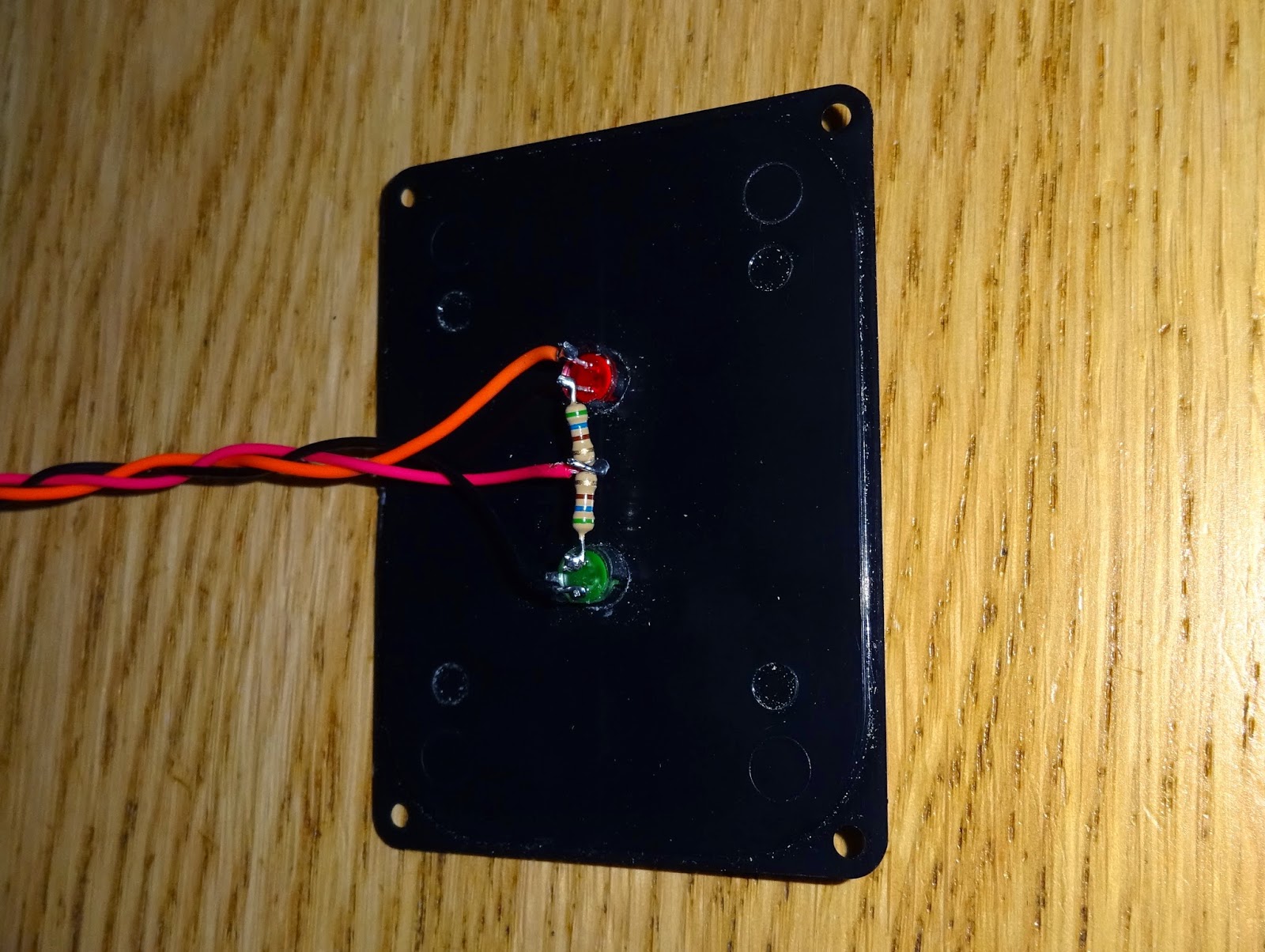 The rest of the circuit (a 7406 hex invertor) also goes on the padboard, and it is all wired together. 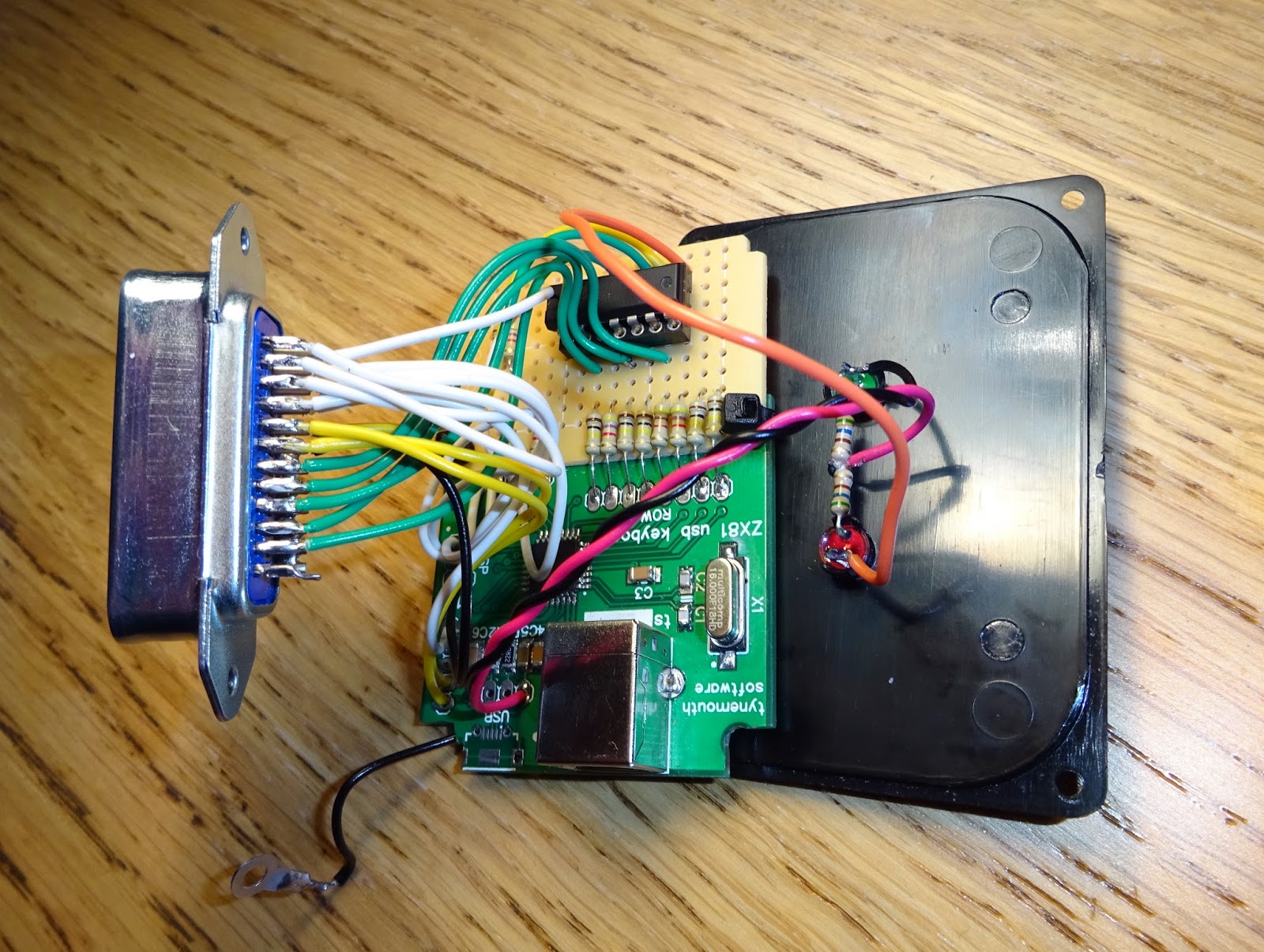 That just fits in the box. 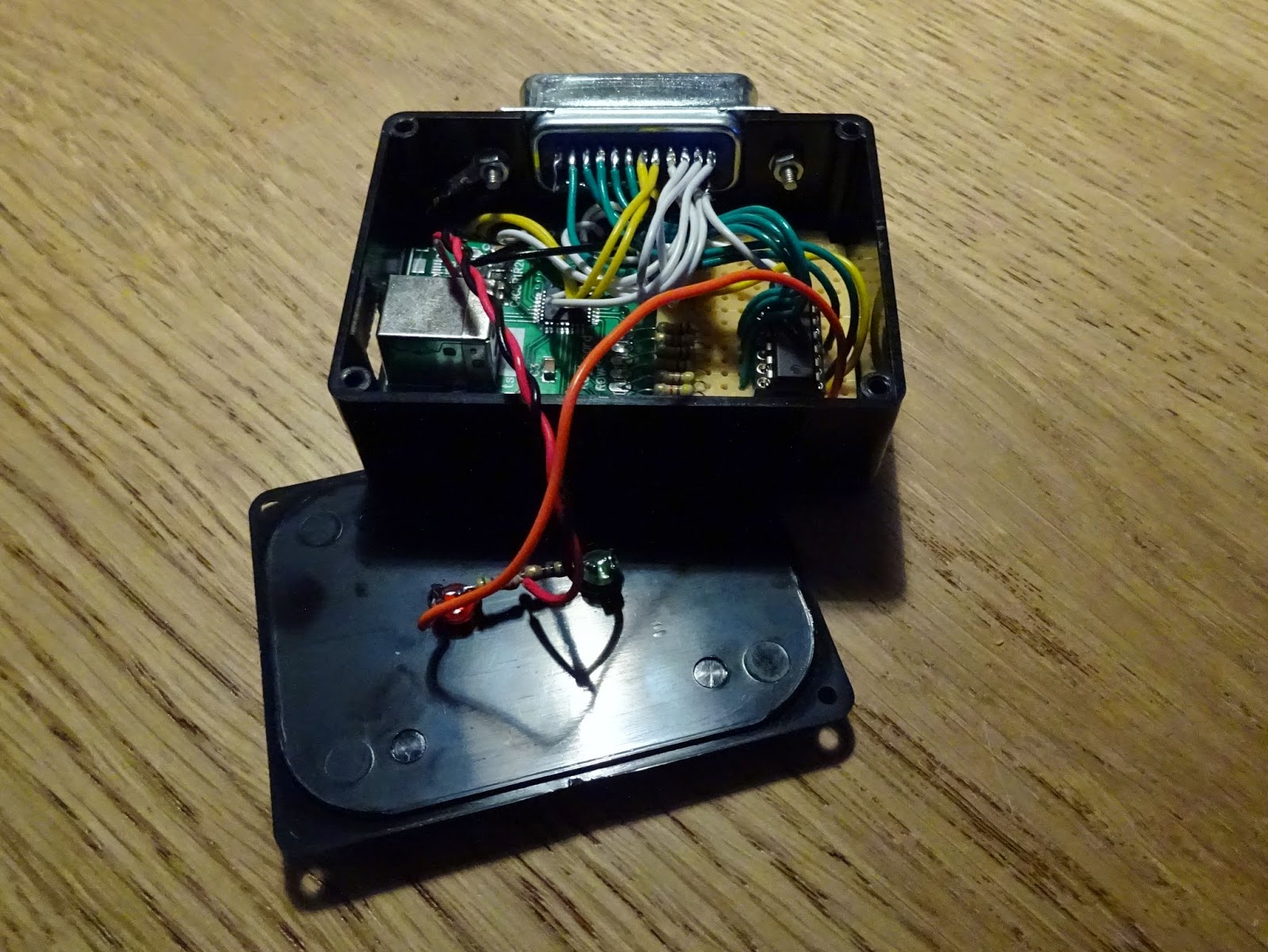 The circuit is actually the same as the IEC version, so I could have added a 6 pin DIN socket, but there wasn't space. Once complete, the unit plugs into the back of the disk drive. 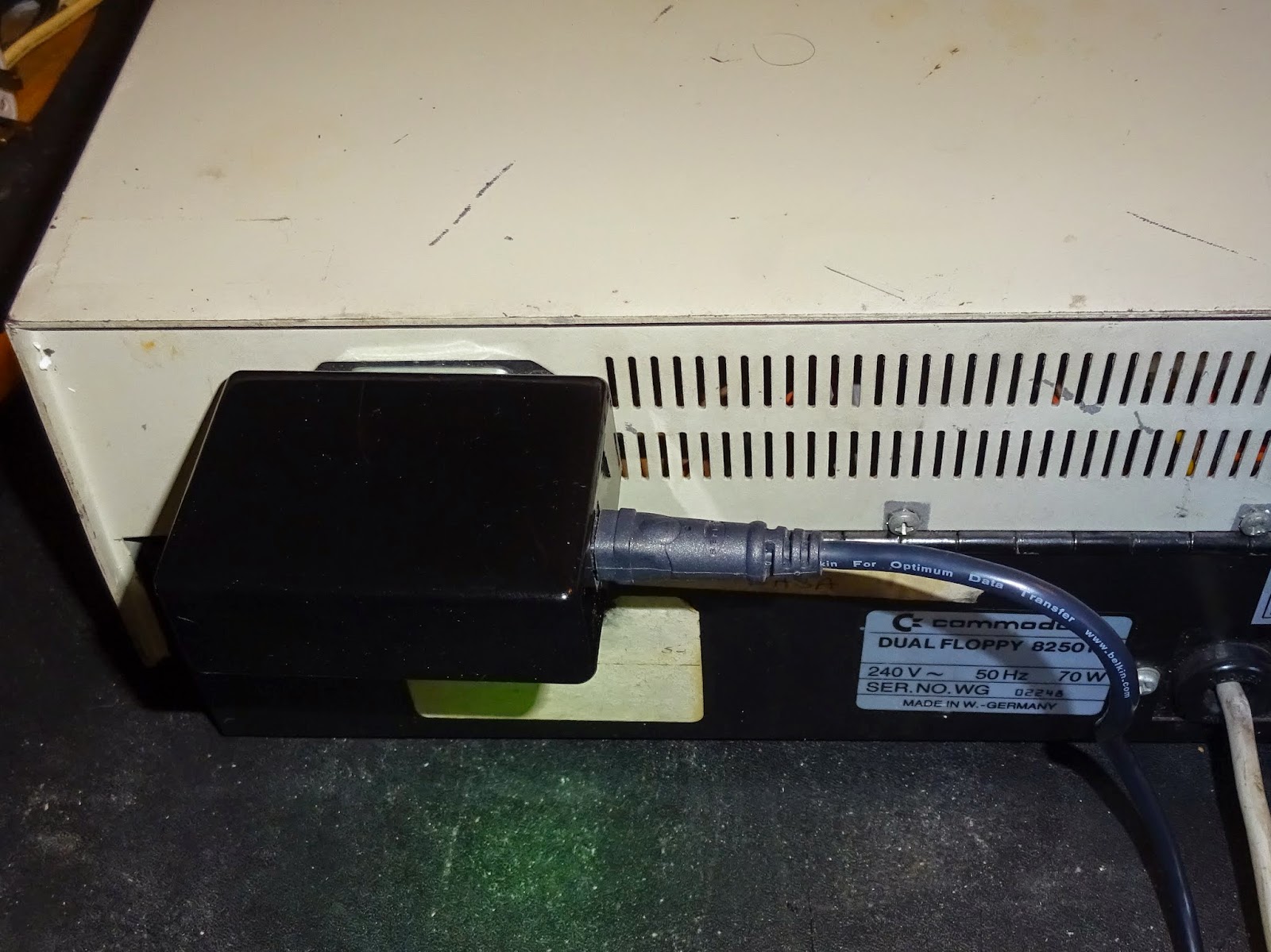 I had forgotten the 8250 drives have the connector mounted upside down, so the LEDs are pointing downwards. I should be able to turn the connector round later on, although it is the right way around if testing with the board loose though. 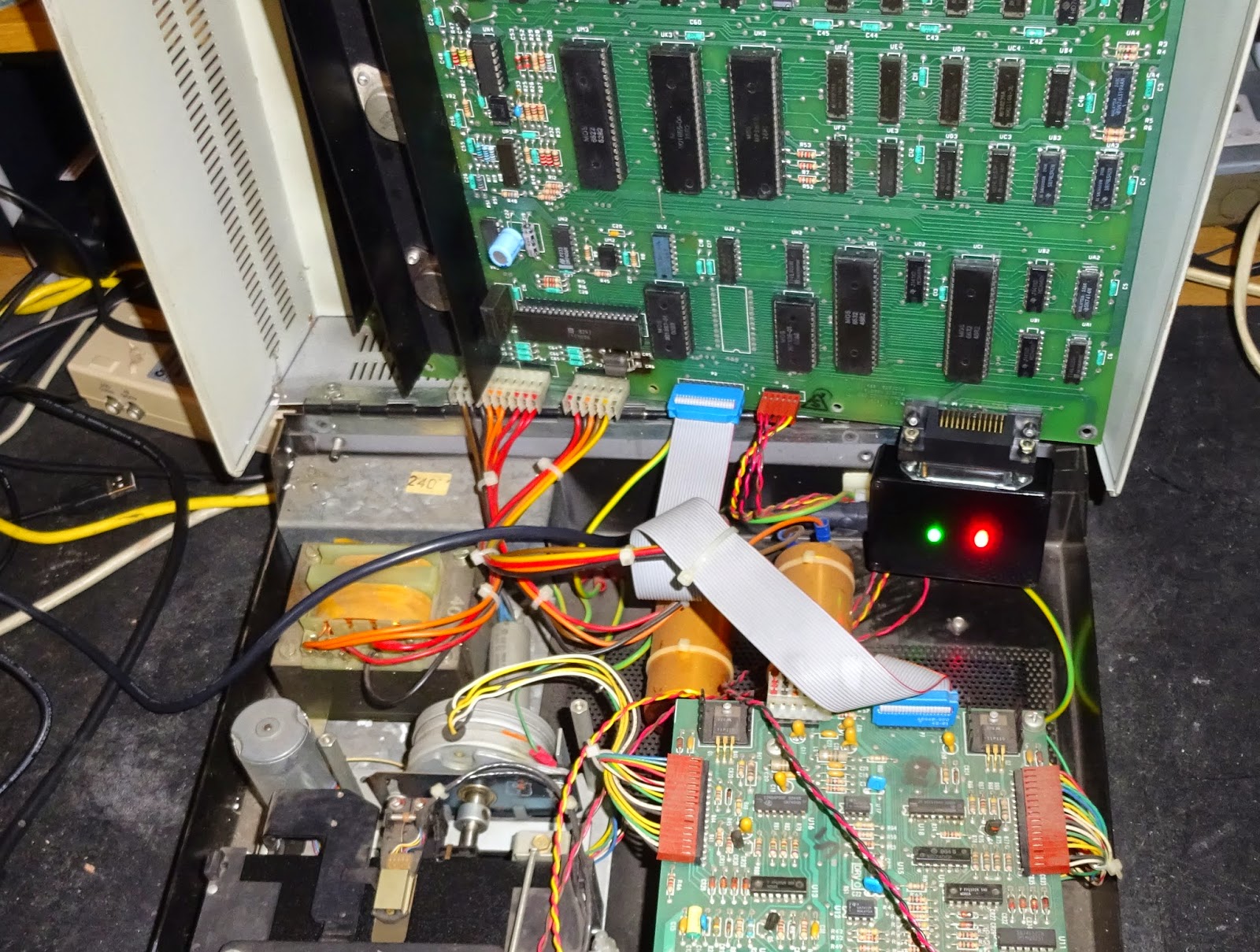 However it's connected, the drive can be accessed using the xum1541 versions of the opencbm command line apps.

The CMBXfer GUI also works with this 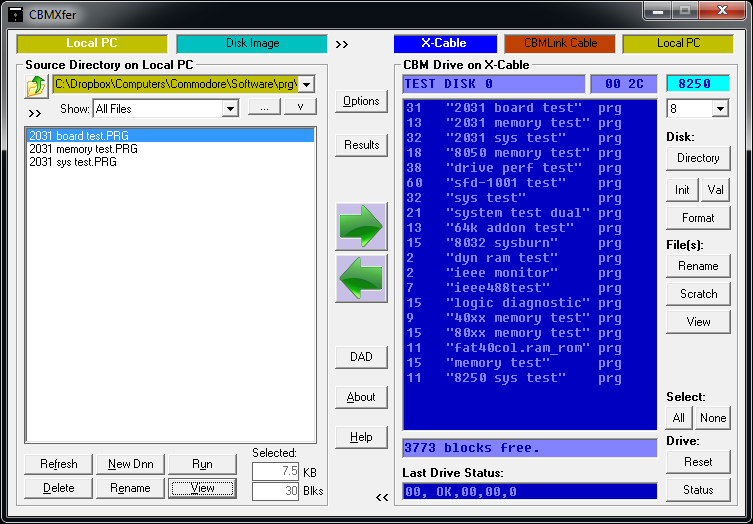 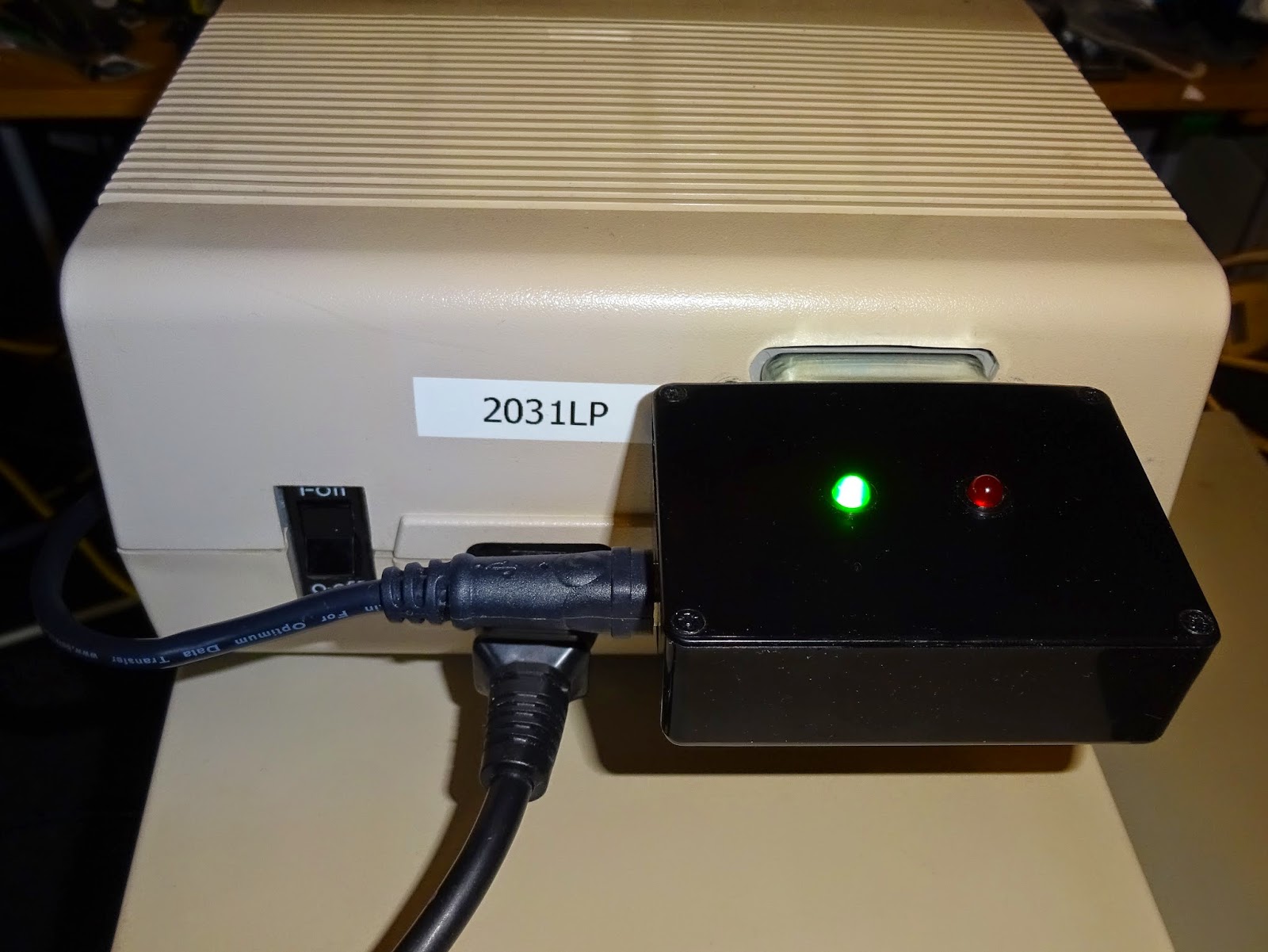 I don't think anyone expected these two things to be connected together, so it is not recognized by the detect command. 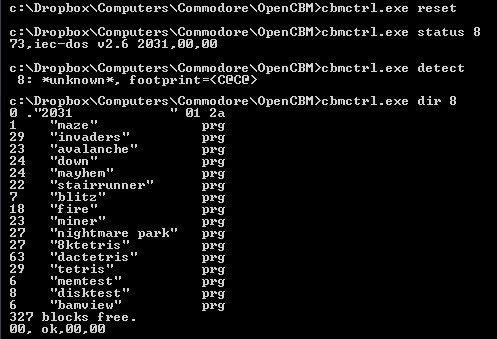 I'm having a few problems with the 2031 clone responding intermittently. I'm seeing the same problems talking to the drive from real Commodore PET computers, so I don't think it's this adapter at fault. As a test, I went back to the 8250 disk drive, I tried copying a .d82 disk image to a real floppy disk.

Don't be fooled by the progress bar, that's only the first track of many.

It took almost half an hour to copy the whole image, certainly a good test of the adapter and the drive. 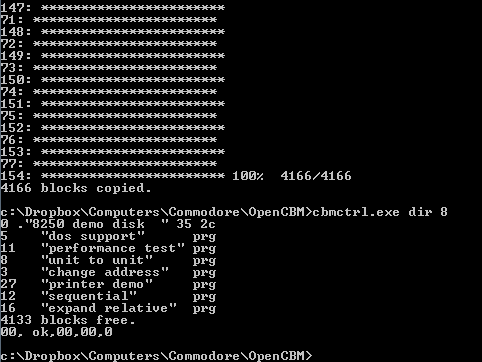 Once complete, a directory showed just how little was actually on the disk image, but still it had been a useful test, and I now have an 8250 demo disk to test the drive out. 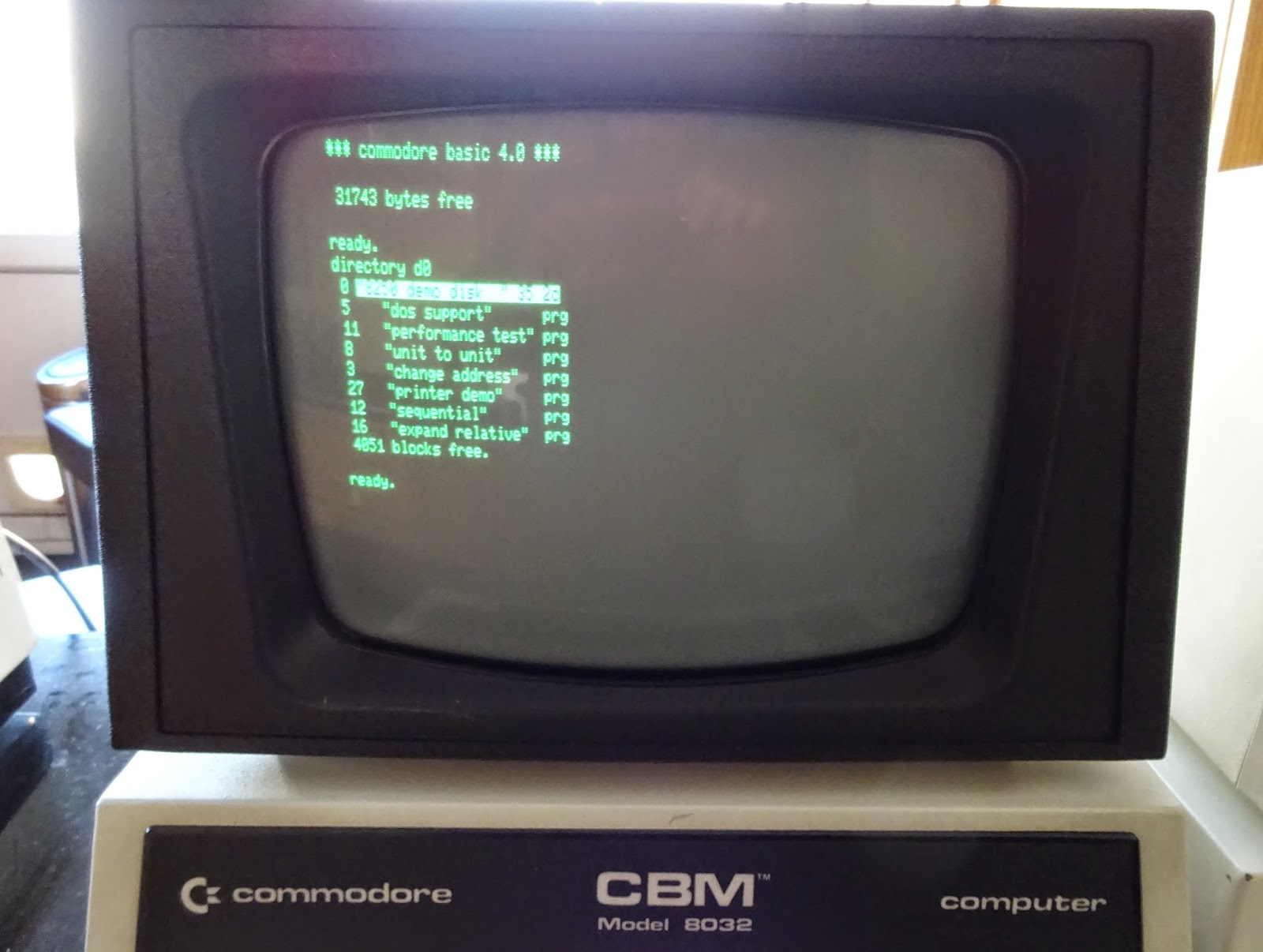 Checking the disk on a real computer, the files have transferred correctly. Another useful bit of kit to add to the collection. 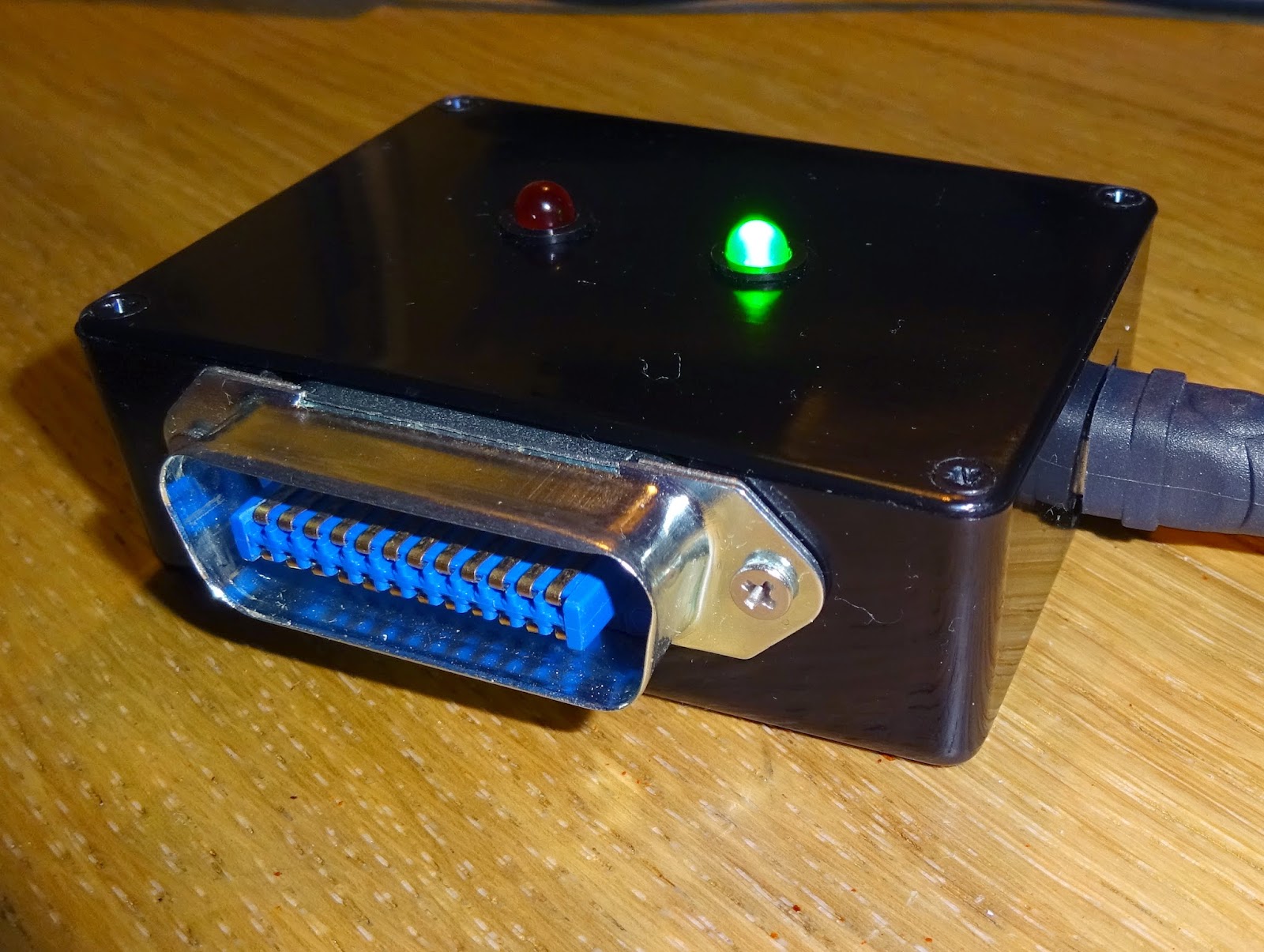 As ever, credit to those who created the xum1541, opencbm, CBMxfer and other tools I have used.
Posted by Dave Curran at 17:42