For the last three years, I've been driving around in a Mark I Nissan Leaf electric car, and it's been great. Three years ago, there weren't that many of them about, but they have certainly picked up. When I got it, things were a bit uncertain, there were lots of neighsayers warning the battery pack would go bad and cost half the price of the car to replace, and also that it would never be practical etc. I was pretty confident it would be fine, but to minimise the risk, I took a three year lease. At the end of that the car goes back to the leasing company and if it does need a new battery, that would be their problem. 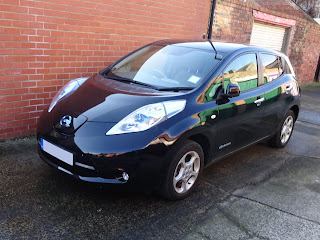 Well, here we are three years and 9,000 miles later, and none of the doom and gloom has happened. Far from it. It's been a great car, very easy to drive, very cheap to run and maintain, and no massive battery replacement bills. Running costs have been minimal, servicing seems to be mainly replacing the pollen filter and the screen wash. Charging in many places is free (many car parks, Ikea, Metro Centre, my parents house), and checking back on my chargeyourcar charging card, I have paid in total £3.00 in the last three years. Yes, three quid. The most I have paid in one go was in a business park where a 75% charge on the Leaf's 24KWh battery pack cost £1.05, between 1p and 2p per mile. My old faithful diesel Golf was about 10p per mile (+ servicing, road tax etc.). I don't have figures for how much I spent charging it at home, but at 10p per kWh, it would cost £1.80 for a 75% charge, working out between 2p and 3p per mile. Given that, and all the free charging, I would guess the 9000 miles has cost me in total less than £100. Read that again, nine thousand miles for under one hundred pounds! 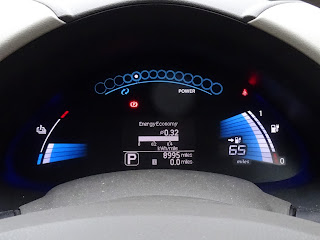 I'm quoting these as 75% charge figures as I generally try to recharge when it goes down to 25% charge. That is usually showing 25-30 miles left at that point. I have learned that the range estimates on the Leaf are frankly rubbish. Often double when you would actually get. In practice, driving with no consideration for economy, and enjoying the car and it's quite impressive acceleration, I could get around 40-60 miles before it got down to 25%. This was fine for me, I do lots of short local journeys, so this is great. From Tynemouth, I've driven down as far as Billingham, and up as far as Alnwick. These both pushed the limits a bit. However it was comfortable driving to Durham or Newcastle Airport etc. The Mark I Leaf starts in 'D' (drive) mode, which is full performance. There is an 'E' (economy) mode, that reduces the acceleration and the heater to conserve energy. It's still nice to drive like that, but that is more effort to engage (press the gear knob down twice), so I didn't use it much unless I had to. I think the newer Leafs reverse this to encourage greater use of Eco mode. 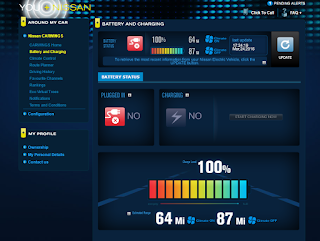 The online 'carwings' app shows charge and estimated range has got a bit better, but is still flaky, and suffers from the same poor estimates and still shows percentages that can only be one of 13 values, one for each of the 12 bars on the display, so no additional granularity. There was a bit of publicity recently about the lack of security on this. I was interested to see whether there was any more detail available in the raw data responses, but didn't want to get my IP address blocked by trying it. Credit to whoever created that animation, I wonder if I am the only Leaf owner with a collection of Commodore PETs?

Towards the end, the range has seemed to have dropped a bit. Not sure why. There are 12 bars on the side of the 'fuel' gauge which show battery condition. Mine is still showing all 12. I have seen some other Mark I Leafs for sale with 30,000 miles on the clock and the battery condition dropped to 11 bars. As an example, I was trying to work out the numbers. One day, I was down to 2 bars, so 17% charge, 83% to fill. I charged it on a 3.3kW charger (a 16A supply), and in 4 hours 15 minutes, it was full. That is 4.25h x 3.3kW = 14kHw, it should have been almost 20kWh. I suspect this is an instrumentation problem, so it may have been reading empty when there was quite a bit of charge left, but I was never confident enough of that to run it flat. As I say, the instrumentation of the fuel gauge on the Mark I Leaf is a bit rubbish. 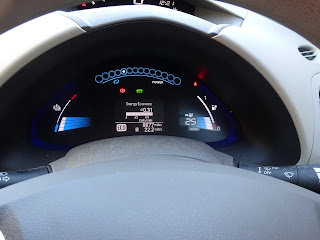 In all that time, I never actually ran out of charge. That was always the first question, 'what happens when you run out of charge on a motorway'. Of course the answer is the same as a petrol or diesel car, people point and laugh. The trick is also the same as with a conventional fuel vehicle, plan to not run out of fuel. I won't name any names, but in the three years I've had the Leaf, another member of my family has run out of diesel twice. 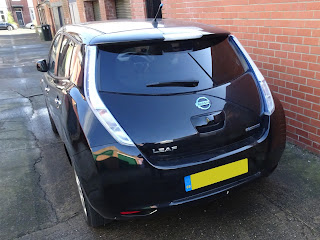 So all in all a great car. I would certainly recommend a Leaf to anyone who drives less than 50 miles a day. That's about 90% of car owners apparently. Cheap to run, very easy to drive, low maintenance costs. I've got a loan of a petrol car at the moment and I'd forgotten how much more effort it was to change gear all the time, go out of your way to stand for five minutes filling the tank with foul smelling flammable chemicals and then paying £60 for the privilege. (N.B. that's £60 for a tank of petrol to maybe do about 400-500 miles, I got 9,000 miles for less and two tanks full). 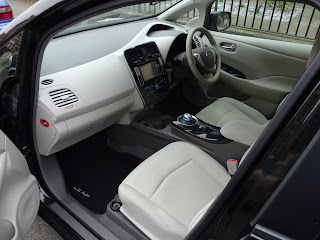 Like any used cars, the prices on used Leafs are quite low these days. There aren't many of these Mark I Leafs around, but it is well worth considering a used Mark II, which has a better heater, better range etc. It is now the end of the lease, and the lease company (Arval) has messed me around quite a bit offering to sell me the car at the end, then saying they couldn't, then saying ask again 30 days before the end of the contract and so on. The final conclusion is no, they won't sell me the car. Bit of a shame as I would have been happy to buy and keep it. The car has now been collected and I am soon to take delivery of my new Electric car. No, not a Tesla model 3 (I'm waiting for the model X), it will be another Leaf, one with more batteries, bigger range, seemingly better range estimates and a better stereo. More on that when it arrives.
2022 Update: I still have the 2016 Leaf that was on order when this was written. That's nearly 10 years of driving electric cars and would not go back. I don't like the styling of the current Leaf, so I am happy to stick with this one, it recently passed it's MOT with no problems, other than the tyres which were starting to show their age. They would normally we worn out by this age, but the regenerative breaking on the Leaf puts less stress on the types than traditional breaks.
Posted by Dave Curran at 10:23