Here we have quite a nice looking Issue 7 BBC Micro. It's nowhere near as yellow as it looks in this photo. 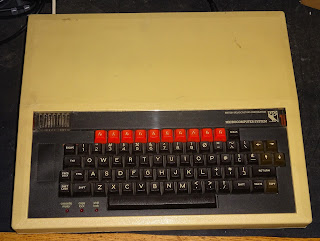 BBCs are a bit like Commodore PETs, they often contain all manner of upgrade boards and add ons. You never know what you are going to find until you open one up. This is one of the more boring ones, but still a nice machine. A tape only issue 7 model B with no expansion ROMs, disk controller, speech synth, ECONET or any other goodies. 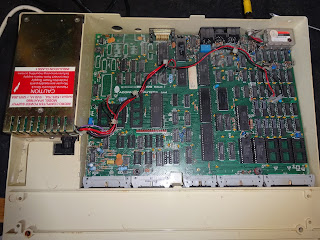 Before I go any further, I've replaced the power supply mains filter capacitors, and finally got around to writing a blog post on BBC Micro Power Supply Repair. 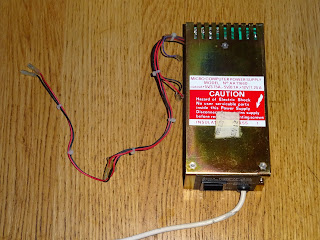 With the power supply taken care of, time to turn it on and see what's wrong. 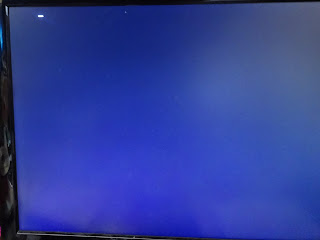 Not a bad start, a single beep, and a flashing cursor. This is a common fault, and is normally caused by a faulty system VIA (the 6522 to the left of the CPU). Handily, the user VIA (the 6522 below the CPU) can be borrowed to test this as it is only required for access to the user and printer ports, and the BBC will boot without it. 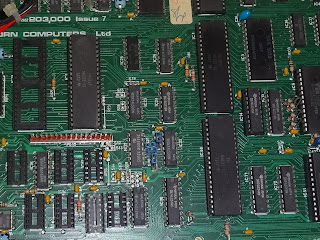 Swapping the VIA made a difference, so we can probably conclude the original was faulty. There is now a BASIC prompt, but the beep is now permanent, and the keyboard is not responding. 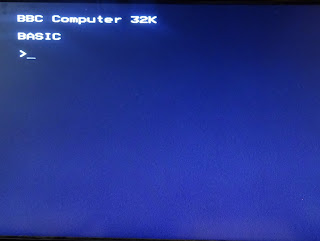 Fitting a known good 6522 gave the same results, so the orignal VIA was faulty, but there is something more. The VIA is necessary for boot because it controls a lot of the internal devices, and when it's not working, the boot sound isn't cleared and the keyboard won't respond and various other issues with screen mode etc. can occur. Tracing the control circuit out, the VIA drives a 74LS259 addressable latch. All the outputs of this were static, they should be moving around at boot, which was confirmed on a working beeb. 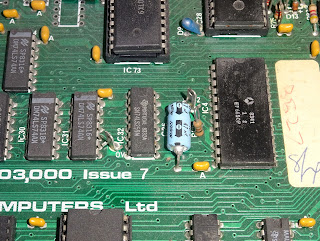 I removed and tested the chip, and it failed in the IC tester. I didn't have any new LS259 to hand, but I found a used chip which was a better match to the surrounding chips than the original was. 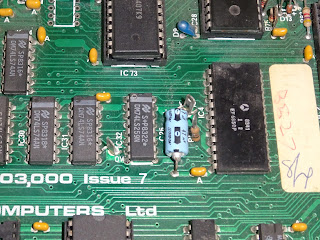 With that in place, I got the familiar double beep at startup, and the keyboard started responding. 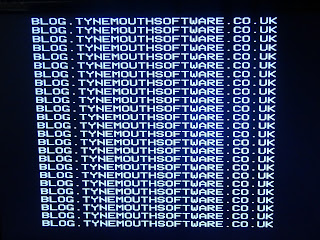 The usual tests looked good, I'll leave that to soak test for the moment whilst I decide which disk interface (or rather disk interface replacement) I am going to fit.