Before I start, I should apologise for the photography in this article. I've never got the hang of taking photos of a CRT, and this one is also a different orientation from this page, which doesn't help. 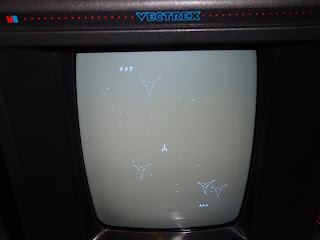 This is the Vextrex, an unusual games system with a built in 12" black and white monitor, which is mounted portrait and driven by vectors rather than the normal raster image. It was distributed in the UK by Milton Bradley, usually known as MB Games, although they wish to point out that this is not a toy. 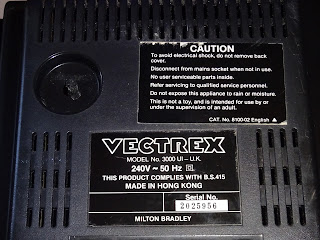 It is a cartridge based system with a 6809 processor (like the Dragon 32 and Tandy CoCo) and a massive 1K of RAM. 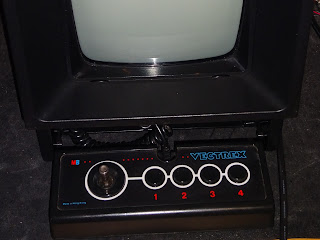 This one is in for repair because it controllers are behaving oddly. Two were supplied, and both seems to show the same issues, permanent acceleration in a racing game, and lack of responsiveness on the direction controls. 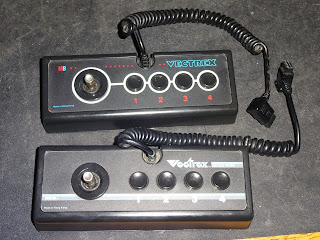 The construction of these makes it difficult to get inside without damaging the labels, so I did some tests with a multimeter, and the buttons appeared to be working correctly. 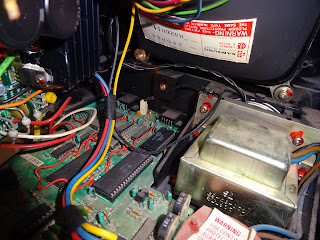 Inside is a strange combination of a TV and a computer, which is what it is. It looked like getting the board out was going to involve desoldering various wires, but luckily the main chips were socketed. 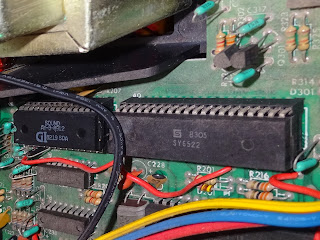 The larger of the two is a 6522 VIA, a 'Versatile Interface Adapter' used for IO on the Commodore PET, VIC20, BBC Micro and others. That would be the obvious choice for the joystick interface, but no, it turns out to be connected to the other chip. That is a General Instrument AY-3-8912, a sound chip which also has an 8 bit IO port, used on the Amstrad CPC464 and Spectrum +2 and others. As you may be able to see from the fact it's less dusty than it's neighbours, I have swapped that out, and that has fixed the problem. 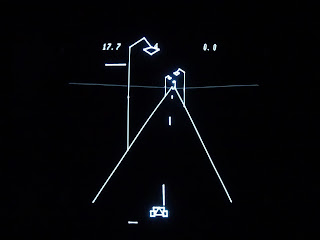 The racing game is now properly controllable. You can really see how games like this benefit from the vectors with smooth diagonal lines, no jaggy steps here. 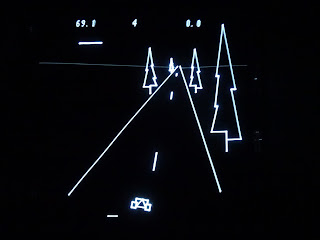 You even get a change of scenery and some lovely (if a little out of season) Christmas trees. Normally these games come with a sheet of acetate which sits over the screen and provides fixed regions of colour, but it works fine in black and white if you don't have those. 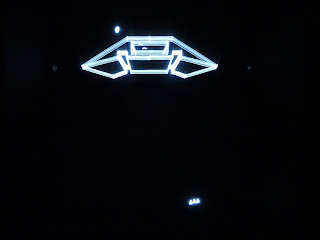 With the cartridge removed, it activates a built in Asteroids style game called Minestorm, with some very angular UFOs. 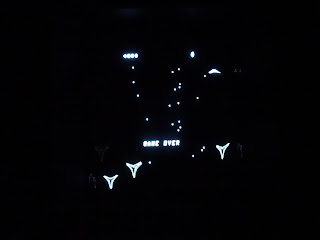 Please note, I do not offer a Vectrex repair service, it's not practical to post these things as they are too fragile.

2022 Update: I had to remove this post shortly after it was posted as I kept getting requests to repair Vectrexes. Vectri? whatever they are called, they are not suitable for shipping, so even when I was doing repairs it was only practical because this one was local. Now I am not able to do any repairs, hopefully I won't get any more requests.
Posted by Dave Curran at 11:05