It's about time I did something about the keyboard on my Commodore 128D. It does the job, but there are a few issues with it. 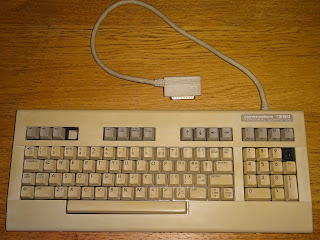 Firstly, the + key is missing from the numeric keypad, and the key stem is broken. 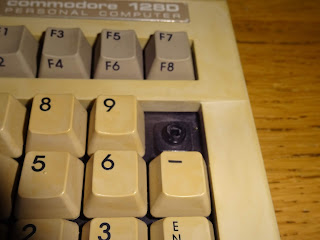 And also, the Caps Lock switch is a latching switch and that is completely missing 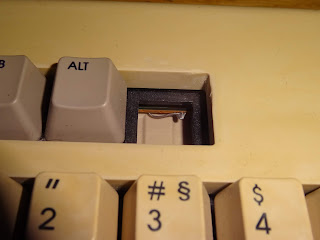 The other issue is this is not the standard UK keyboard, it seems to be a German QWERTZ keyboard, with the alternates on the Z and Y keys. 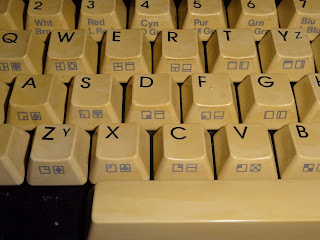 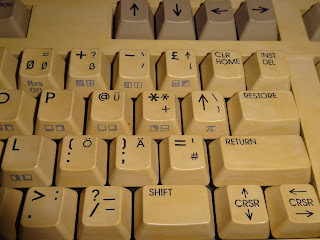 To help with this, I have a keyboard from a broken slightly yellowed flat C128. I'm a bit scared to remove that address label on the bottom as it looks to have been there a long time, so will probably be a different colour underneath. 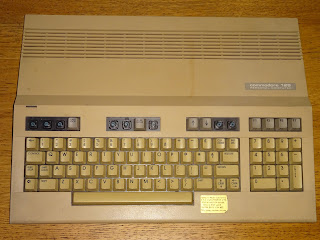 This one also has issues. Caps Lock is present, but all the other buttons next to it are broken off. The top row of keys stick up the most, so are often the ones to get damaged in storage (or when being pulled out of a skip). 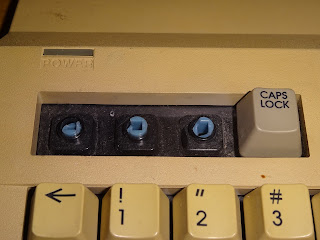 Apart from the function keys on the end, they are C128 mode only, and are not recognised in C64 mode (even the arrow keys are ignored). The 40/80 key is there, but again is alone in it's group, and also the switch is broken. 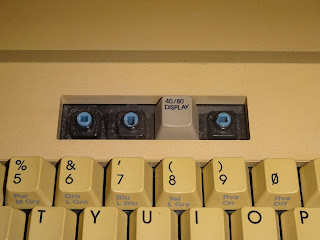 The function keys are all there, two of the arrow keys are missing and the ; ) key is stuck down and repeating. 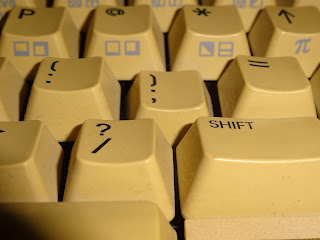 The keyboards are actually almost identical, the main difference being the cable. On the C128D, this is a two foot cable with a 25 way D male connector on. 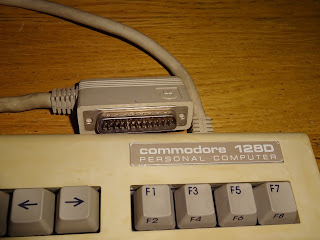 On the flat C128, it is a six inch cable with a sort of square 25 way D female connector on. 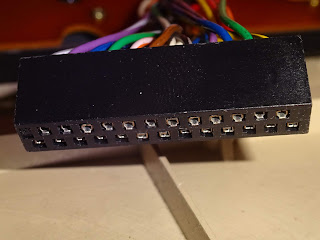 The same PCB was used for the flat C128 and the original C128D, with either a pin header for the internally connected keyboard on the flat C128 (below). 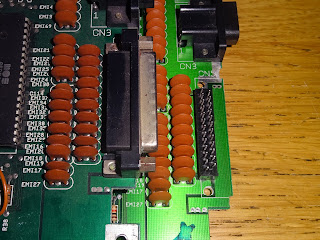 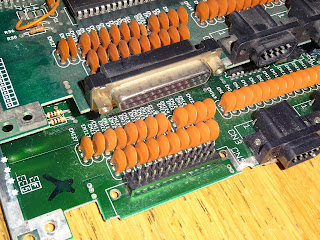 As with most Commodore keyboards, to do anything with these involves desoldering the connections to the latching switches (three of them on the C128 boards) and removing hundreds of tiny screws. 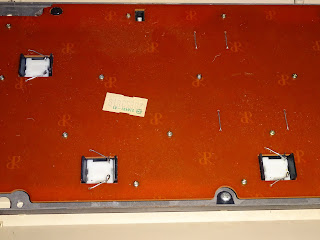 Whilst it's apart, it's a good opportunity to give the contacts a good clean. 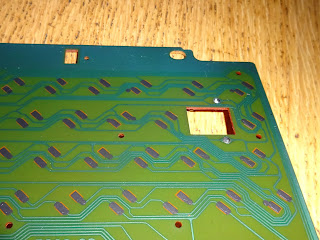 Putting it back together, I added some tape over the place where the cables were soldered on. All the VIC20 / C64 keyboards had this from the factory, but neither of these 128s did. 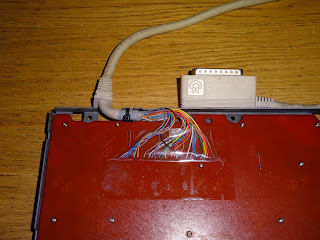 The metalwork is identical, so I ended up swapping the PCBs around to make things easier. They both have the same mounting holes and angled sections etc. so it's was a straight swap. I used the key stems from the two top row arrow keys and the - on the keypad to replace the broken / missing ones on the good keyboard and to provide the most useful keys on the other. 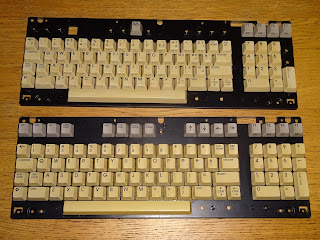 I have rearranged things to give one standard UK keyboard with a full set of key switches, and one made from the leftovers, including all the QWERTZ keys with the extra symbols on. (and before anyone asks, I don't have any spare keys available. Every time I do a post like this, I get people asking for spare keys. Sorry, as you can see I've used them all) 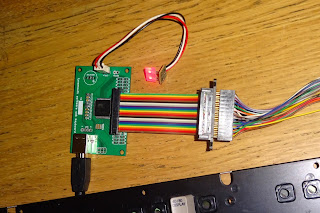 I had been asked for a Commodore 128 USB keyboard controller, so that was another reason why it was a good time to run through this as I had it around for testing. I've built a few of these C128 USB keyboard controllers, but not enough to have done a custom PCB (yet), so this is adapted from one of the my generic boards with a 25 way D connector on a ribbon cable. I have used a 25 way D male IDC connector with the shell removed. It's not a perfect match for the pin header on the C128 board, but it works fine. 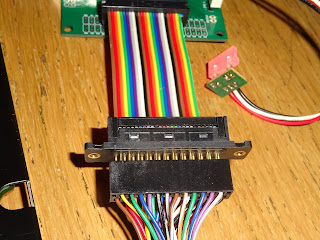 The board with the leftover keys has all the keys required for C64 mode, and the caps lock switch moved along with the 40/80 cap on it as the 40/80 switch is rather important - how many C128s are thought to be broken because 40/80 has been pushed down and it's in 80 column mode..... 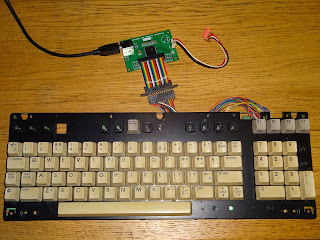 That all tested fine, so will be quite handy as a keyboard for bench testing C128 boards, when I won't be too bothered about the extra symbols or missing C128 mode keys. 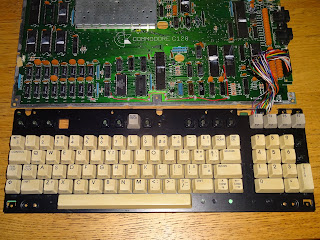 To test the good keyboard I will be using for my C128D, I used an alternate ribbon cable (if I tell you the 25 way D connector was purple, can you guess where it came from?). 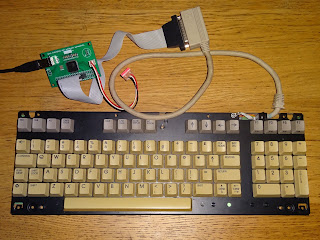 That also tested all fine, so back into the case and it looks alright. A bit yellowed, but evenly so, and not obviously made up of bits of two keyboards. 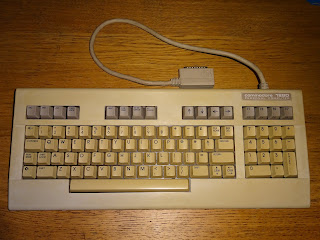 I know I have tested it as a USB keyboard, but I wanted to retest it on the C128D itself. 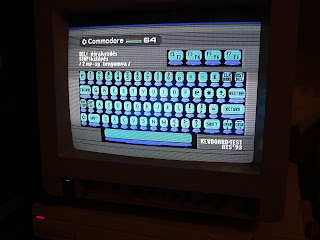 That's all back together with the similarly yellowed C128D-CR and a 1901 monitor. 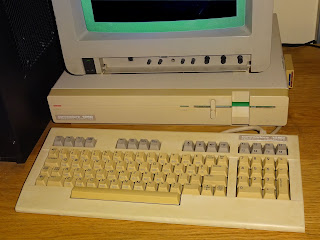 And yes, of course I tried out Rodman. 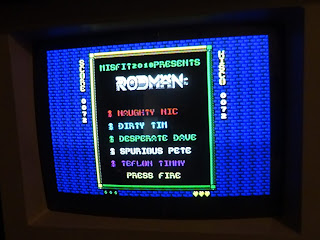 The CRT monitor is always nicer to look at, and clearer in the s-video and RGB modes the C128 generates, but I still tend to use pictures from an LCD monitor in these posts as it is easier to photograph, apart from in C64 mode, where the light blue on dark blue colour scheme rather confuses my camera. 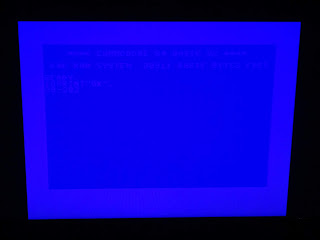 Sometimes on these posts I end up with a folder full of unusable photos as I try to surprise the camera by coming at the screen at different angles. 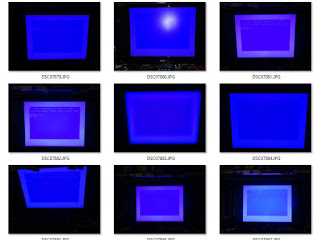 Sometimes I give up and have to cheat and poke the VICs background colour register to black (see next week's blog post...) 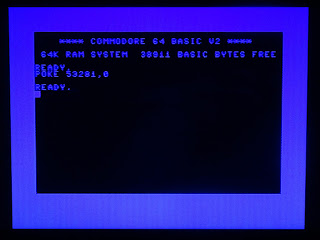