As part of an upcoming blog post, I am going to need to include lots of oscilloscope screenshots, and I have been looking at this device as an alternative. 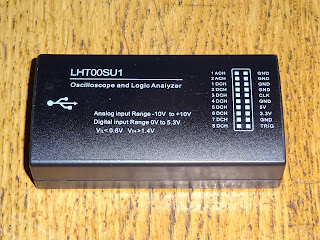 My previous efforts taking photos of the screen of my 30 year old 'scope have varied from OK to awful, and often took many goes to get a usable image. 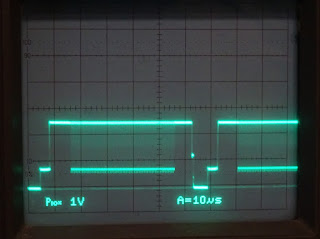 I looked around at various options, but they were all a little pricey, and unless I suddenly get a rush of new Patreon supports, they are a bit out of my range. So I thought I would try the cheaper end of the market. I picked up this device, the LHT00SU1 for less than £25 delivered. 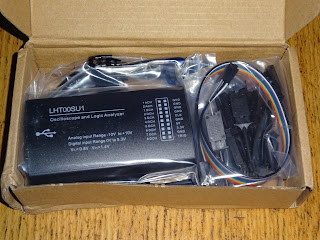 It has eight digital inputs, and two analogue, so would be ideal for the task in hand, which was looking at a composite video output and the digital signals that generate it. These are all connected via a 10x2 0.1" pin header. 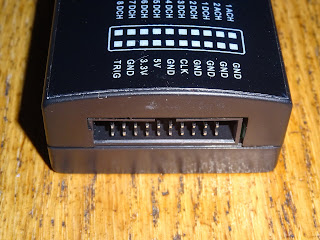 The kit came with some cables and clips, although I'll probably not use there as they are a bit rubbish and holding onto chip legs. 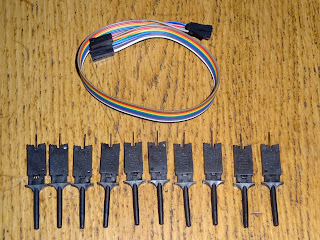 I'll swap them for E-Z Hook probes I use elsewhere. I have found these to give a good connection and cope with a but of moving around without falling off, although a set of clips does cost more than the analyser itself. 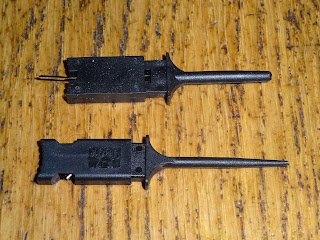 The LHT00SU1 is available from a variety of sellers, described as "Virtual Oscilloscope Logic Analyzer". Based on all the listings I looked at, none of these come with software. It turns out to be  a clone of the USBee AX Pro, a discontinued product from a manufacturer that has since removed the software suite they used to supply. Presumably as a result of their device had been cloned. I'm not sure what all these sellers are expecting you to do, most of the descriptions talk about XP software, so I guess you need an old XP laptop and get the old software from archive.org. 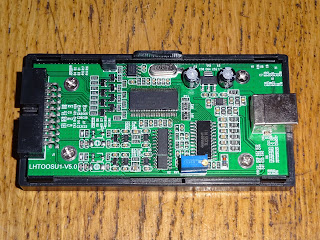 Looking inside, the heart of the unit is a Cypress FX2 chip (in this case, the CY7C68013A FX2LP). This is the sort of device where you plug it in and then firmware is downloaded to it and then it is detected as the end product. So without the original USBee firmware it's not much use. 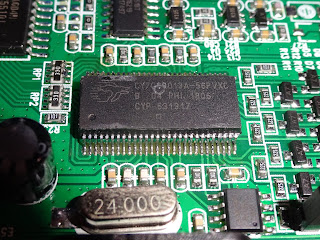 A bit of googling comes up with Sigrok, the same open source software I use with my current logic analyser. That does support this hardware with fx2lafw, an open source firmware for these FX2 based logic analysers. This detects the device and allows you to select the firmware it uses.

With firmware on the device, it is detected by Sigrok as a CWAV USBee AX, with eight digital inputs and a single analogue input. It turns out the original device multiplexed with two inputs to a single ADC, the new firmware does support the switching, so you only get a single channel, but that's fine for my purposes. 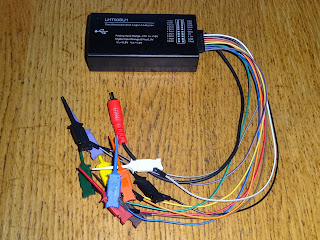 I made up a set of test leads, including an analogue lead with a shielded cable and a phono plug on the end to pick up the composite video signal. I fitted a jumper on the second analogue input, to ground it, and somewhat shield the analogue input from the digital pins. 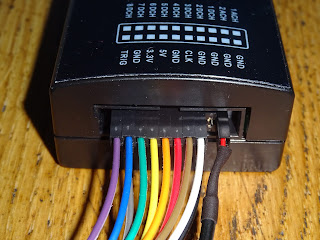 Time to hook this up to the device under test, one of my Minstrel ZX80 clones. 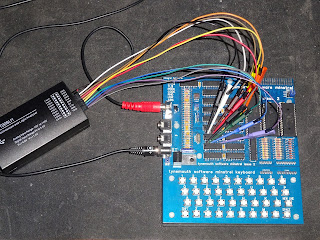 The E-Z Hooks are holding up well clipped to the chip legs. 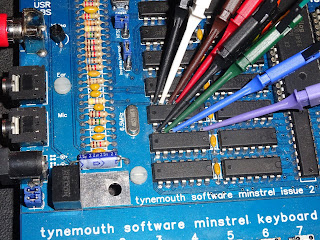 I've entered a simple 10 PRINT program to fill the screen with X's so there is some data to examine. 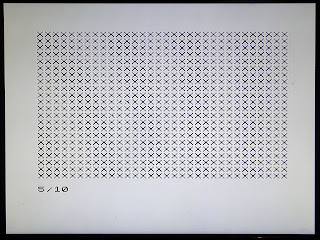 Time to fire up the Pulseview program from the Sigrok suite. Good start, the device is recognised, and I've setup the channel names and run a capture. 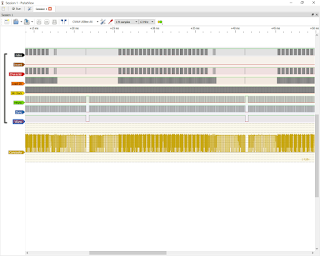 That looks good, a whole screen's worth of video and the digital signals that built it up. 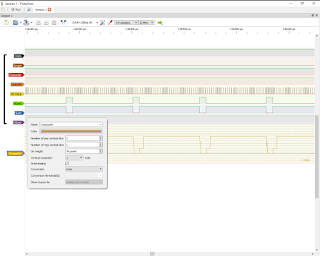 The analogue input has options so that it can be adjusted appropriately, here showing -1V to +3V to cover the range and that signal with space to spare. (although it's a bit annoying as this seems to get lost sometimes so you have to reset it) 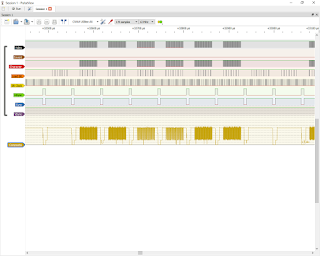 Zooming in, it's less good. That was several horizontal lines making up a row of characters, and this is a single line. 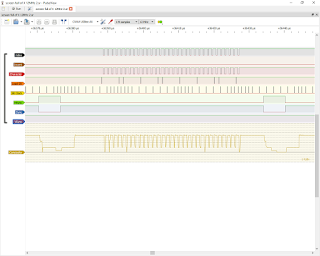 It is clear from that screenshot that pulses are missing from the clock and load shift register signals. This would normally be cured by increasing the sample rate, and the device is meant to support up to 24MHz, but unfortunately whenever I select over 12MHz, the screen locks up when I click run. 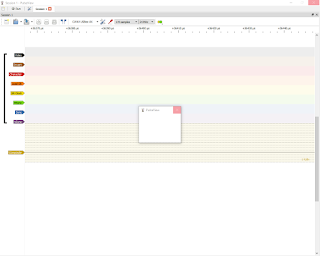 So, I think this one goes down as a partial success. It's working, but not quite fast enough to show the information I need. Any suggestions for a device which will do the job?