Continuing the look at the BBC Micro series of machines, next we have the often overlooked BBC B+. This was a stepping stone between the model B and the Master, looks very much like the B, but with many of the features of the Master. 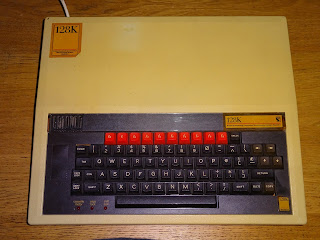 Outside the only obvious difference are the stickers. I've seen B+'s with different style labels, and my 64K doesn't have any markings, but my 128K has three of them. 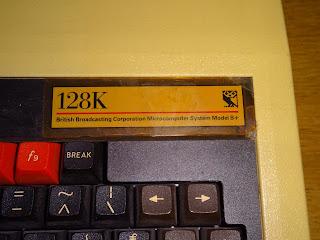 Inside, the same power supply (see the BBC Model B repair post for important information on those), the same keyboard, but the main PCB layout has been rearranged. 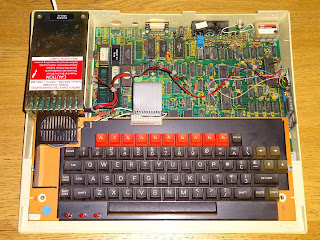 The case has all the same connectors as the original, in all the same positions, even including the hole for the reset switch, although without a footprint for it. The Econet components are again optional. 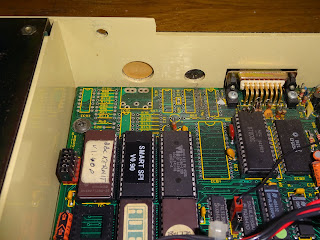 With the keyboard and power supply removed, you can see the full BBC B+ board. This is the B+ 64K version. 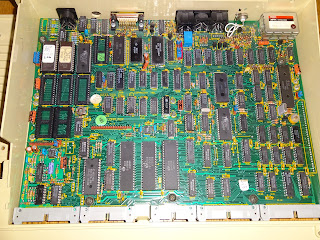 The ROMs are now in the top left so you can access them without the need to remove the keyboard. There are now six ROM sockets (the two below are for the speech processor which was still hanging around from the B). The OS has been upgraded to 2.0, and combined with the BASIC ROM, so there are five available expansion ROM sockets for 32K ROMs, rather than the three spare 16K sockets on the model B. The original design of a 16 slot paged ROM proved a very good one, and was common to all the machines from the model A to the Master, more on that in a future blog post. 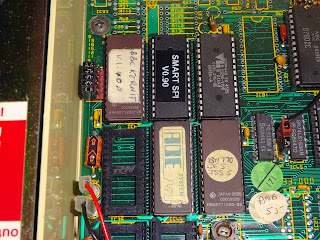 The CPU had been upgraded to the 6512, essentially the same as the 6502 but with some changes to the clock circuitry. Still running at 2MHz. Both 6522s are installed by default, there wasn't a BBC model A+ (the VLSI part looks like a later replacement). 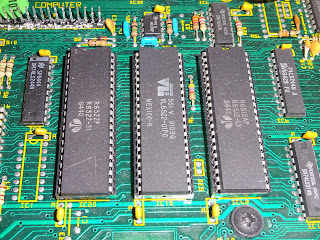 The disk controller has been upgraded to allow a WD1770 to be fitted, which was a common upgrade for the earlier machines, although I think the B+ places it at a different address. It looks like there is an alternate footprint below for the original 8271 style disk controller, although I've never seen one fitted. 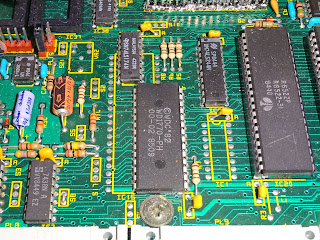 The big change was the RAM. The B+ 64K had 32K as the original model B, but with an additional 32K. 20K of that was used as shadow screen RAM, which would allow specially written software to make use of up to 20K of main RAM that would normally be needed for the screen. The last 12K was available as sideways RAM. 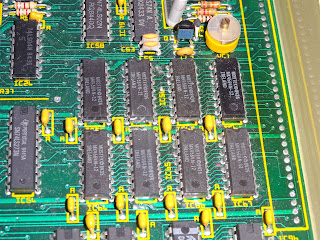 There was also a 128K version that had a further 64K as four 16K sideways RAM banks. The board has a pinout at the side for the extra 64K module, however for some reason, this is not sufficient, and the actual 128K module has ten extra wires that connect all over the board. 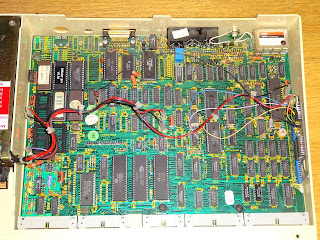 I can understand the commercial reasons why they wouldn't just fit empty sockets for two 41464 RAM chips, people would just buy the cheaper version and upgrade themselves (as happened with the 16K model As). 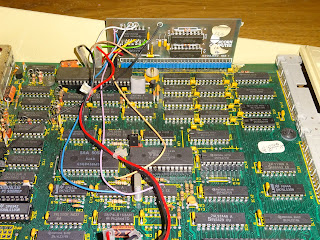 Those extra wires make the 128K implementation look rather messy, with several soldered directly to IC pins, the whole thing looks a bit like an afterthought. More like an aftermarket upgrade such as the Solidisk 32K sideways RAM upgrade for the BBC B which required similar wires all over the place. 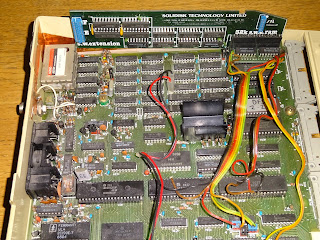 These days with the availability of fast and cheap 32K RAM chips, you can convert a B+ 64K to 128K in a much neater way by using a stack of 62256 chips in a spare ROM socket, with only a couple of wires coming off them. A lot neater than the official Acorn version. 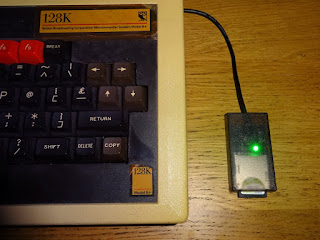 Of course, I'm here to test this with the new SD2BBC from The Future Was 8 bit. This is a user port based SD card drive for the whole BBC ragne™ of machines. 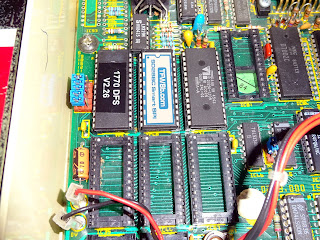 The Smart SPI ROM is installed in a spare socket. The one between the standard DFS and the OS ROM is higher priority than DFS, so will startup with Smart SPI selected. The drive is plugged into the userport, and all works as expected. 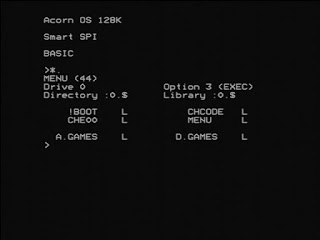 The photos on these blog posts have so far shown the prototype units, the production ones come in a beige case, with an owl (but not a pen). 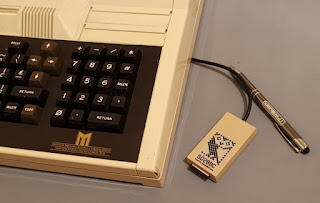 These are available to order now and will be shipping next week. 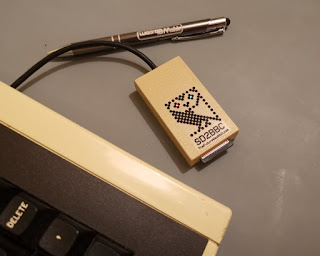