What is a Minstrel?

In the build up to the launch of the Minstrel 4th and the reopening of my Tindie store last week, I made a few changes to the existing Minstrel line up, so I thought it would be good to answer a few of the questions about that, starting with What is a Minstrel? 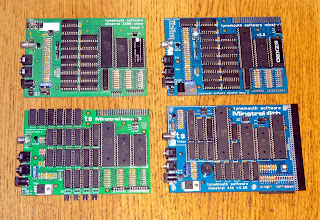 Minstrels are a series of Z80 based computer kits in the same shaped board as a ZX81. The first of these was launched in 2016, the Minstrel 1, a clone of the ZX80 design. It was only produced in small numbers, a sort of proof of principle (so they must now be worth at least $1M each). Could I make something that size which worked as a ZX80 computer, but was able to fit into a ZX81 case and use it's keyboard? 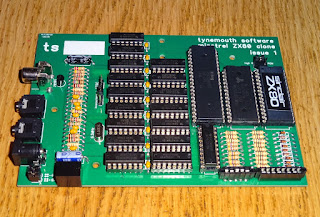 That was soon followed by the Minstrel Issue 2 (I dropped the 'Issue' bit later on, and just refer to that is the Minstrel 2 now). This added a back porch circuit to the video output to make it more usable, and also an edge connector for ZX81 expansions. That was still pretty much the ZX80 design, other than the RAM and ROM were switched for currently available chips, giving it 16K or RAM and multiple ROM options. 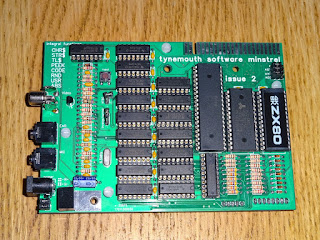 Due to a mixup by the PCB manufacturer, one batch of Minstrel 2 boards arrived in blue, and that has sort of stuck. I have kept green boards available in small numbers, but there are only a few left, the Minstrel 2 is only be available in blue now. 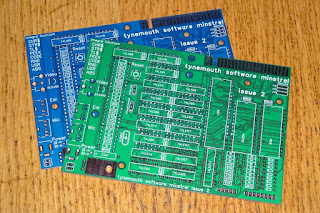 The Minstrel 2 has been refined a few times over the years, the latest being the Minstrel 2 V2.8. That includes a slight change to the composite video output to match that developed for the Minstrel 3. 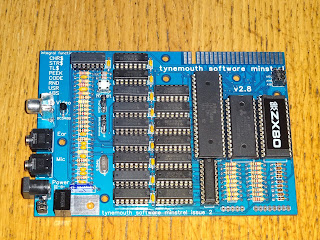 The Minstrel 2 still follows the ZX80 design, so could only run some ZX81 software, as it lacked the 'slow' mode where it could run code in the gap at the top of the screen, instead of having to stop drawing the screen altogether when it wanted to run code. 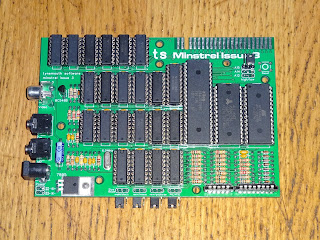 In 2019, after quite a bit of work, I launched the Minstrel 3. That added the 'slow' mode, but also deviated from the original design quite a bit to make a more modern interpretation of the ZX81 design, less reliant on analogue properties of digital chips than the ZX80 design, and added 32K of RAM set up to work with high resolution graphics. 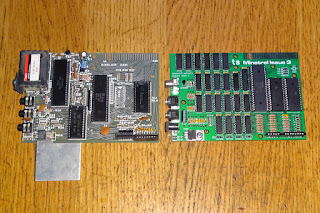 The board was still in the ZX81 form factor, and was now an ideal replacement for a dead ZX81 or simply to preserve a working one and replace it with one with extra RAM and composite video output. 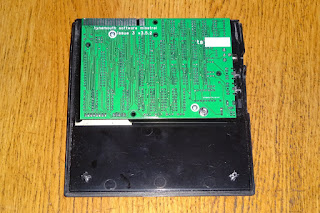 As well as the ZX81 case option, the Minstrel now had it's own keyboard, and a keyboard overlay PCB with all the keywords and graphics characters marked on. 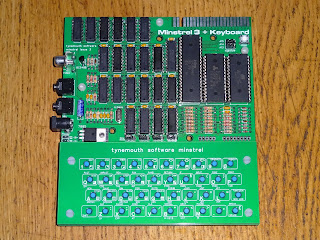 That made a nice standalone system built with all modern parts, but was still compatible with the ZX81 and could run all the software a fully expanded ZX81 could. 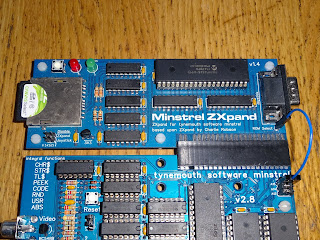 To make all that software easier to load, I produced a special version of Charlie Robson's ZXpand, with only the bits necessary to make it work on the Minstrel 2 or 3. 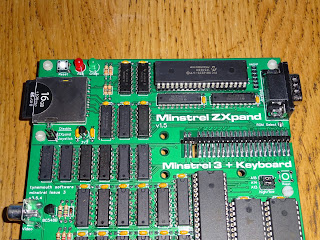 You can fit an edge connector, but I think it makes a more stable and better looking system if soldered on using a pin header. 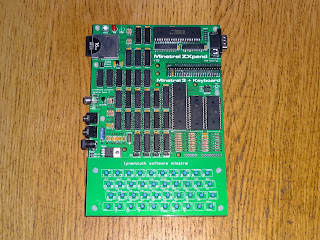 The next in the series was the Minstrel 4th. This followed similar principles to the previous Minstrels, Z80 based, ZX81 shaped, all the upgrades, all modern chips. But this one was based loosely on the Jupiter Ace, and can run Forth and Jupiter Ace software. 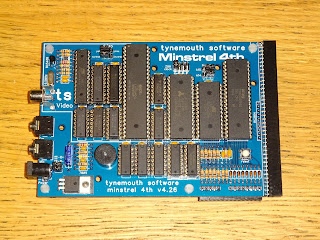 This one also added an RC2014 expansion bus (which is why it went blue again). The way the video circuitry is isolated in this design leaves the Z80, ROM and RAM running full time, unlike the ZX80 and ZX81 based designs that rely on the Z80 to run NOP instructions for most of the time whilst clocking through the video RAM. I had looked at adding this bus to the Minstrel 3, but most of the add ons would not have been usable. 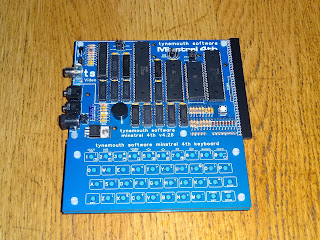 The Minstrel 4th can also be ZX81 shaped and fit into a ZX81 case, but again works best stand alone with it's own keyboard. This is almost the same as the ZX81 style used on the Minstrel 2 and 3, but the button row of keys is arranged differently, so it has a separate keyboard PCB. 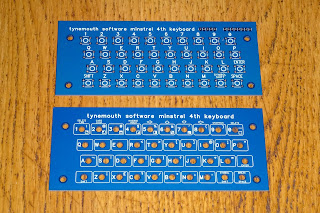 There used to be lots of options on my Tindie store, you could chose what type of keyboard connector, the voltage regulator, some or all IC sockets etc. and it got a bit complicated. Sometimes people would ask me what options to choose, other times it looked like they had picked them at random. 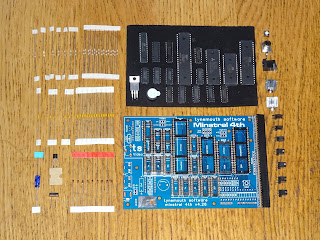 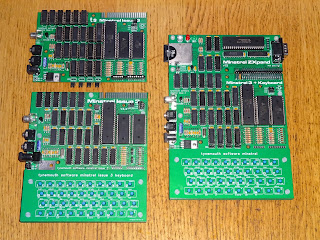 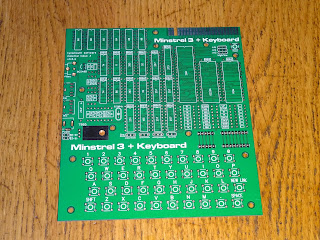 I have also moved all the PCB only options to a separate listing (that makes the postage options easier as well as previously people could choose the 'put it in a card backed envelope with a stamp on it' when they had ordered a full kit with power supply etc.). I will also be adding PCBs from other things which are not available as kits to this same listing. 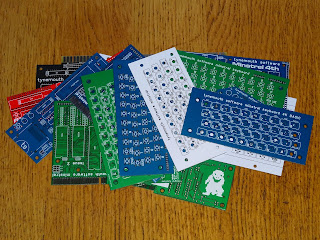 Also split out is the 'Partial kit' option, which includes the PCB and the difficult to find and pre-programmed parts. 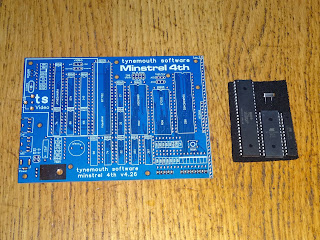 So those are the Minstrels and the new options. You can order a Minstrel 2, Minstrel 3 or Minstrel 4th from My Tindie Store. If you have any more questions, let me know (as long as it's not the one about why it's called a Minstrel)*. 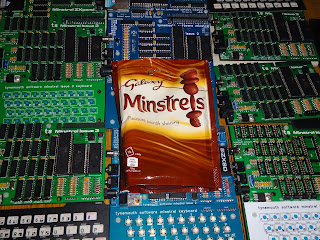 *Oh OK, why did I call it the Minstrel? Well, there was a ZX Spectrum clone called the Harlequin, and a Minstrel is a similar sort of medieval court jester type thing, but whereas the Harlequin is usually very colourful (like a Spectrum), the Minstrel is more black and white....
2022 Update: We did a final run of Minstrel kits, the "Final Editions". The Minstrel 4th and ZXpand kits sold out quite quickly, At the time of writing, there are still a few Minstrel 2 (ZX80) and Minstrel 3 (ZX81) kits available from  The Future Was 8 bit but there are unlikely to be any more.
Posted by Dave Curran at 13:42