I was wandering around our local second hard market at Tynemouth Station and something grabbed my attention on one of the stalls. It was an Acorn Electron, in its polys, complete with mains adapter and manual. The polys were a bit worn and the cardboard outer was missing, but the Electron seemed in decent condition.

The cover on the expansion port was still present, this is a good sign as they often get lost if they have had a hard life.

I was told it was 'working the last time it was used' (but that was probably 20 years ago). So I haggled the price down a bit and took home my bargain. 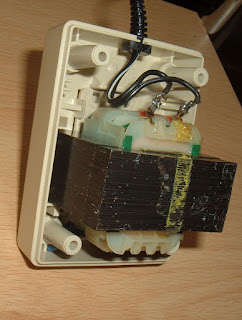 Before I powered it up, I tested the PSU and got about 20V AC off load which is about right from what I remember. All the other's I've had were fitted with beige cable, this one was black, so I had a quick check inside, all seems ok, so I gave it a go. Nothing. Blank screen. 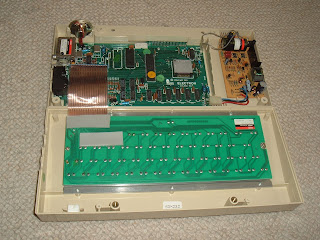 Inside all looked well, the voltages were correct on the pins of the PSU, + and - 5V, so no problems there. From past experience, it is usually the ULA in these things.  The Spectrum suffers similarly with the ULA, it's service manual seems to suggest 'Replace IC1' as the solution to at least every other problem. The Electron's ULA doesn't seem to go as often, but is quiet prone to bad connections. 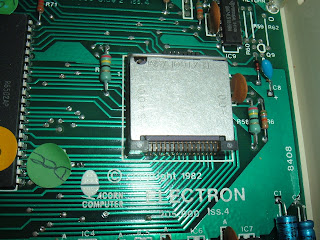 They used a number of different sockets throughout the production, but none seem to solve it. A quick blast of the air duster inside the socket and a clean of the contacts with IPA usually does the trick, but not in this case. 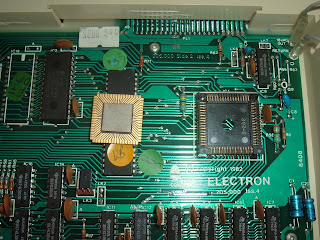 My next step is usually to try a known good ULA, so I borrowed one from a spare Electron (as you do). Same there, no display. I also tested its ULA in the other Electron and it worked fine, so it wasn't that. The CPU, RAM and ROM were all soldered in, otherwise I would have tried exchanging those. 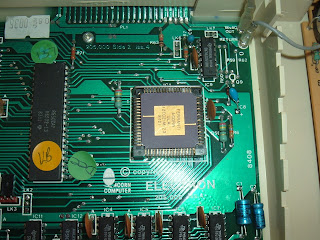 Head scratching time, and time to dig out the Acorn Electron Service Manual from Chris's excellent site. I followed through the steps, checked all the voltages and clocks etc. and the only things that was left on its flow chart was 'Replace 6502 (unlikely)'.

This was looking like another potential candidate to be turned into a USB keyboard, but I thought I would persevere. None of the chips in this Electron were socketed (some board had CPU and / or ROM in sockets), but in the absence of anything else, I desoldered the CPU and fitted a socket. I borrowed the CPU from the other Electron (which was socketed) and tried again. 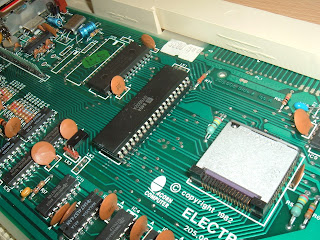 And there it was, a beep followed by Acorn Electron BASIC and a flashing cursor. So unlikely as the authors of the service manual (and its reader) though it, it had been the CPU. A few more tests and no faults found; one more Acorn Electron returned to full health.