My parent's bought a Samsung LE40R74 the same as mine, because I'd been into Curry's and peered through the grill on the back and seen that inside was the LTA400WT-L01 panel. At the time I worked with large LCD panels as part of public information displays (bus stations, airports etc.), and that was one of the panels we had chosen to use, so I knew the were fairly decent and had seemed to stand the test of time. 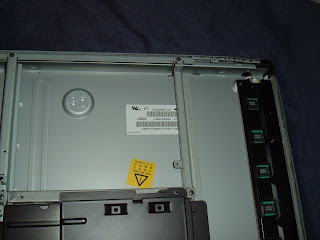 They got it and it did the job very well. Then it went off, or rather it started occasionally switching off, and sometimes wouldn't switch on. So I took the back off and had a look around, and there seemed to be a couple of dried up capacitors which had opened their vents. Capacitors work the opposite way around to mussels, if you cook them and they open up, you throw them away. I noticed that the ones that had gone were very close to a heatsink. It seemed to be a poor design, that close to a heat source, they are bound to dry up over 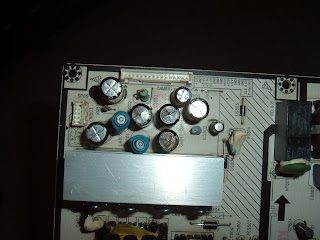 The duff capacitors were filters on the low voltage and standby side of the power board, so presumably as they had dried out their capacitance reduced and so it was failing to generate sufficient power to keep the TV on. 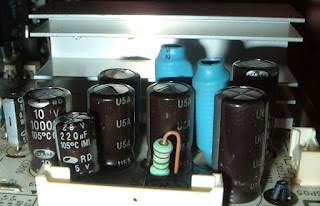 I popped out to my wonderful local electronics shop (ESR) and got some replacement caps, 105C rated and replaced all those in the area around the heatsink and away we go, the TV is back up and running. 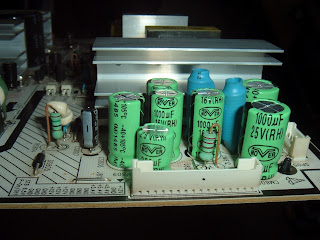 That was a couple of years ago, but since then a couple of people have come to me with similar Samsung TV's with similar symptoms. I don't normally repair TV's, but in this case, it sounded like it was the same issue. And indeed it was, these ones also had dried up capacitors, in the same place around that heatsink. The later models seemed to have gone for 2200uF rather than 1000uF, and yesterday, another one arrived, an LE40R88, same problem, but in this one they had used 25v caps rather than 10v as before, which was still sufficient for the 5v rail. So it sounds like they are trying to fix this problem by changing the caps, but they seem to have moved them closer to the heatsink! 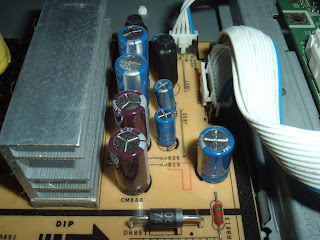