After almost 11 years, it's finally time to replace my trusty VW Golf GT TDI. This has served me very well over the last decade or so, and even though it's now 14 years old and still solid and reliable, it's time to upgrade. 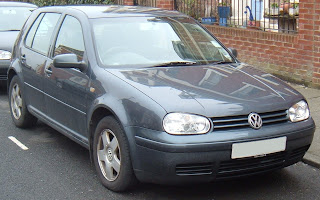 I've looked around at various options and have become very interested in the possibilities of electric cars. It's a tricky subject to get decent information on, because there seems to be a lot of bad press on them, but really when you get down to the facts, it seems to be a combination of lazy journalism or lack of understanding.

The first thing everyone says when I mention electric vehicles, is 'what happens when you run out of charge on the motor way'. When you think about it, the answer is exactly the same as 'what happens when you run out of petrol on the motor way'. The answer is this, people point and laugh and you make an embarrassed call to a recovery service. The point is, you don't get into that situation. In a petrol car, if the low fuel light was on and the gauge was low, you'd think ahead and refill before making a long journey. It's exactly the same with an electric vehicle.

The main difference is that the overall range when full on an electric vehicle is in the order of 100 miles, whereas my teenage diesel could get in the order of 600 miles with 50 miles to the gallon. So, yes, it needs charging more often, but you can charge at home, at work, various car parks, and it costs between £0 and £3 per charge. As opposed to £70 on my golf. Given that information, if you plan to take long trips or drive more than 100 miles a day, an electric vehicle isn't for you. But if you're like the vast majority of us and you commute to work and back, 10 to 20 miles, plus trips to supermarkets etc. there's no reason to consider 'range anxiety' an issue.

So, my decision was made, an electric vehicle was a good choice for me, so all I I had to do was pick one. There aren't many choices at the moment, and the Nissan Leaf seems to be the best choice for me. There is a dealer close by, so I arranged a test drive and tried it out. It was fine. It worked, I was able to drive up and down the Coast Road without a problem. I didn't run out of charge. I didn't have to push it home. I didn't have to stop half way for a charge. It just worked. I don't have much experience of driving an automatic, but it didn't take me long to retire my left foot and left hand and drive only with the accelerator and brake (although I'm still subconsciously trying to check I'm in first when I'm waiting at lights). 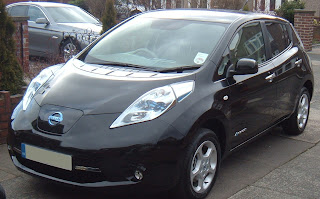 I'm not the slimmest of drivers, but there was plenty of space inside, probably more than the Golf, even though it was about the same size externally (so it's 'bigger on the inside'). That's because there's just less stuff in an electric vehicle, the biggest item is the battery which is beneath the floor, the charger is behind the back seat, and the motor, transmission sit in the front where the engine would normally go. Also under the bonet is a standard 12v battery to power the lights and the radio etc.. That lot takes up much less space than an internal combustion engine, gearbox, transmission, exhaust, fuel tank, etc. This is front wheel drive, so there's a bit more going on, some of the older rear wheel drives were frighteningly simple and elegant with the wheels attached directly onto the motor shafts.


Having overcome what the press had said was the main issue (that of range), and my main issue (that of interior space), I couldn't see a reason not to get one, so I ordered one. Buying outright didn't seem the best option, and there is a potential issue of battery longevity. Nissan were quoting 5-7 years I think, and Renault had opted for a different solution and were actually leasing the batteries to the driver. Although it may be seen as a downside, all that will happen in reality is the maximum range will slowly reduce. It's not like a petrol car where when the engine goes, it goes at that's it. The solution seemed to be to go for a three year contract hire rather than an outright purchase. That gives me a good long time to try it out and see if it works for me. If it does, I'll be able to look around and buy a newer, faster, better, more version in three years time. Or a Golf TDI if it hasn't worked out.

That was what seemed to be the main objection out of the way, so it should all be plain sailing from then on.... Well, no it wasn't. I hit a few snags, the ones they don't tell you about when they're too busy driving around and around Lincoln waiting to run out of charge. I think most of these will be sorted over time, but in an emerging market, there are some teething troubles.

Firstly charging. That shouldn't be a problem right, that's one of the main functions of the car? Well there are essentially three ways to charge the Leaf. One is via a supplied charger which has a standard 3 pin 13A mains plug on the end and charges the car in around 8 hours (normally overnight). The second is to plug into one of a growing number of charging posts in public and office carparks, many of which have the new Type 2 Mennekes.sockets which with 32A will charge in about 4 hours. The third is to use a rapid charger, currently mainly installed at Nissan dealers, which can charge to 80% in 30 minutes.
The 13A plug charger is supplied with the car. The rapid chargers have cables built in, much like a petrol pump. What's missing is the cable which connects the car park charging posts to the car. Nissan are apparently going to supply one in future models, but at the moment, they couldn't source one. I found one online and reluctantly ordered it (£200 for a cable!). After a week, no sign of the cable and the car delivery date approaching, I contacted them and found it was out of stock until some time in April - I wonder when they were planning to tell me that? I then searched further and found another lead from a different supplier, more expensive (£250 for a cable!!), but looked better with a longer flexible black cable as opposed to thicker bright orange. (and yes, it is thinner, but the conductors are still 6mm squared cable, so it is rated for 32A). That was in stock and was delivered the day before the car. So that one's sorted, and probably isn't going to be a problem for future purchasers.

The next issue they don't tell you about is insurance. It seems half of the insurers I called didn't have the Leaf listed or don't do electric vehicles (0cc? ok, but is it petrol of diesel?) and the other half don't insure leased vehicles. Again, I'm sure they'll get the hang of it over time.

It was quite a struggle in the end. It took a while to get the paperwork sorted and insurance setup, and after several days of emails, and phone calls, the Nissan dealers IT problems and three hours sitting in the dealership signing things, I finally drove away in my new Nissan Leaf. Being electric, there's no engine noise, only road noise and the depressing sounds of depreciation as a new car is driven off the dealers forecourt.

So I'll leave it there for this instalment  this is going to be an experiment, it might not work, but I think it will. Time will tell. There are only a few thousand electric vehicles on the road in the UK at the moment, so it's a bit new, but get over the few teething problems, and I think it's going to work. I'll continue this review over the coming months as I get to know the Leaf and report on my progress.

2022 Note: I think the experiment worked. I had to give that Leaf back after three years, and so I bought another new one, this time with an option to buy after three years, which I did, and I still have it, and it's still a great car. And I haven't run out of electric once.