Just a quick update following on from the rather long first part of this review. One of the longest journeys I regularly make is a 34 mile round trip from here in Tynemouth to an office in Houghton-Le-Spring. I've been driving that route on and off for the last five years, so I know it well. All the little twists and turns, all the places here I need to change gear, and the places where I can get away without doing so. That makes it an ideal test for Nissan Leaf on motorway (type) driving, lets see how it does on that journey.

I have to say I've very impressed, it's so easy to drive. Just press the accelerator and it goes faster. Press the brake and it goes slower. It doesn't have to be any more complicated than that! It's so easy in fact, that I'm finding it easy to be going faster than I expect. I think I must be tuned to listening for the engine noise combined with knowing which gear I was in and subconsciously judging speed from that. One nice feature the Leaf has is a speed limiter, a bit like a cruise control, but just an upper limit, with no lower one. So, if my right foot is a little enthusiastic, it holds back and only accelerates up to the set speed, thus avoiding wasting energy by accelerating up to a higher speed, realising and then decelerating  It also benefits from gravity in the mode, so driving through the Tyne Tunnel, I set it to 40 mph and it was applying the brake automatically and recharging the battery via regenerative breaking all the time it was on the downhill part, the same on the long downhill stretch of the Houghton Cut at 50.

There are charging posts at my destination, so I plugged in my hard won Type 2 lead and charged from about 15% to full capacity in under 4 hours. During that time, I was able to monitor progress via the Nissan Car Wings website: 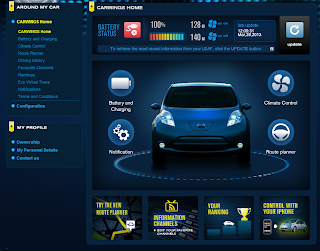 There is also an iphone app and an app for android (although it doesn't support android 4.x devices like my Nexus 7). Not all of the buttons on the site seem to be working at the moment, but I've raised this with Nissan and they're looking into it.

All in all, a very successful test. The range estimates I'm getting are a little misleading at times, I don't know how much of the driving history it bases it's assessments on, but it's going up and down all the time. I've already found I'm more comfortable with hard(er) facts like charge capacity. It seems that journey uses about 30% of the charge each way (the way I drive), so it's much easier to calculate based on that. There are 12 bars on the charge gauge, so as long as there are 4 bars left, I should get there. In practice  I'd be wanting 6 bars+ before setting off. Although I know if it is running low, just slowing down and turning off the aircon should extend the range sufficiently to get me there, and if it doesn't, there are a number of places I can call at on the way for a topup.

So much for a quick update.
Posted by Dave Curran at 10:17