OUYA is a neat idea, it's another in the line of ARM based Android devices, which are essentially an Android tablet without a screen, such as the Raspberry Pi. This one was targeted at the living room TV with a games store and a bundled wireless controller. Netflix and Youtube integration are also apparently on the cards, and there are loads of games to 'try for free' on their store.
What? can't you see it? Well, I pre-ordered one from their website when they started accepting orders for overseas customers. That was on the 11th June. I haven't heard anything from them since then. I've tried email, raising a support case, and even lodged a Pay Pal dispute. However, all I have to show is that empty space and a small but unappreciated dent in my bank balance. I've been waiting as long as possible to give them a chance to reply, but Pay Pal have deadlines for dealing with disputes, if you leave it too long, they won't get involved. The initial case was lodged shortly before the deadline, and it is now time to escalate the case and get Pay Pal involved and get a refund. I'm disappointed that I have to do that, but I can't see any other options.

Update #1:
I escalated the Pay Pal dispute at 07:19 this morning. Just over at hour later at 08:33 I received a dispatch notification. So it took involving Pay Pal to demand the money back to get them into action, but I now have a tracking number. But hang on, what's going on with the tracking? 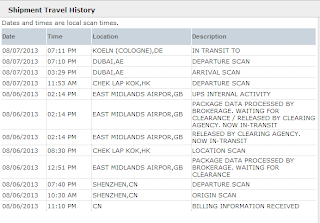 It appears to have left China yesterday (even thought I only got a dispatch note today?), been to East Midlands airport, then to Hong Kong, back to East Midlands, back to Hong Kong, then onto Dubai and is now in Germany! What are they doing, part funding the project with Air Miles? Is this a joke? I don't know.

Let's see if comes back anywhere near the UK again!

Update #2:
It finally arrived at my door, but UPS requested Cash On Delivery, an additional £28.19 in import duty and 'brokerage fees'. That's almost half the original cost of the unit! The original OUYA price included US tax and shipping, and there was an additional charge for international orders, which was about what the tax would have been, so I paid that expecting everything was now covered. Whenever I've ordered from the US in the past, the supplier had added VAT at the time of purchase, thus avoiding this sort of thing.

Sorry, but after complete lack of action or communication until I tried to claim back via Pay Pal, and now this, I'm really not interested any more. The OUYA might be turn out to be a good product, but I don't I think I'll be getting one any time soon.

Update #3:
Paypal had no response from OUYA, so provided a full refund (less a bit due to currency conversions). Shortly afterwards, OUYA emailed to let me know my console was waiting to be collected at the UPS depot (still presumably with duty to pay). I've explained the situation to them, and I think the OUYA console is going off for yet another around the world trip on it's way back to the suppliers.
Posted by Dave Curran at 19:51