I have repaired and restored several 4032 and 8032 boards in the past, and here we have another Commodore Pet 4032 main board for repair. 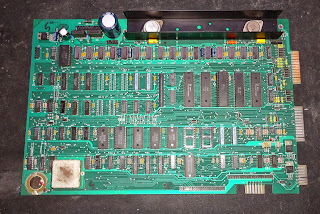 The problem is, it is showing 15359 bytes free, so is only detecting 16K RAM. I quick first check would be jumpers Y and Z. Z should be set for 32K and Y for 16K, But the board was correctly set for 32K mode with link Z fitted. 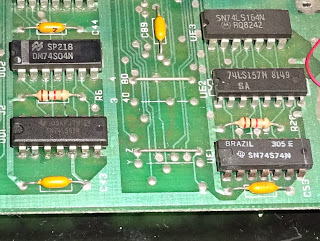 As usual, it's good to check the voltages first of all. I found the 7905 voltage regulator was outputting -6.5v, rather than -5v. Replacing that the rail now measured -5v as it should, but it didn't resolve the memory problem. As the -5v rail is only used by the DRAM chips, and they are sensitive to voltage problems, it may explain if any of the DRAM chips are damaged. 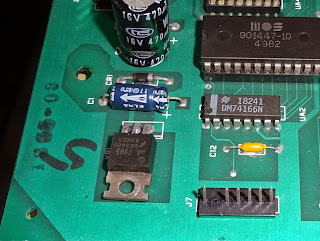 A good diagnostic tool at this point is a ROM/RAM replacement board, I've had a few requests for the 6502 ROM/RAM boards I built previously, and have now run out. I've designed a new version with a few changes, these will be available soon (UPDATE: available now). Installing one of those in the processor socket and enabling it's RAM, The pet boots and detects 32K, so there appears to be a fault in the upper bank of RAM. 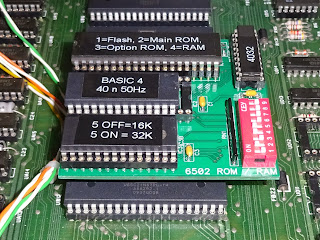 A fault in the upper bank still leaves the system usable, using just the lower 16K. If the fault had been in the lower 16K, it wouldn't have booted up. With a non booting system, it is sometimes worth swapping the ends of resistors R10 and R11 (as I did in the DRAM repair on my 4032). This is all that is required to swap the upper and lower banks. In this case, with the banks swapped, the machine did not boot. This pretty much confirms there is a fault in the upper bank. If there is only a fault in the lower bank, this is an easy way to get the machine to boot. 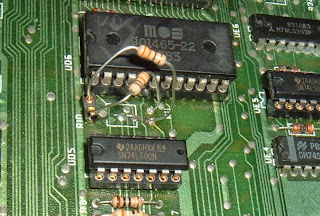 If either or these responses are wrong, you can work out which chip is stuck high or low by converting to binary, so for example if the response is 8 and 255, one bit is stuck high. That is 0x08 in hex, 0000 1000 in binary. So it looks like bit 3 is stuck high. You would get 252 rather than 255 if it were stuck low. From the schematics at zimmers.net archive (pages 5 and 6), you will see that bit each bit is provided by a single chip, the 4116 being 16K x 1 bit. In this case, bit 3 is UA12.
Once the chip is identified, remove it and replace it and see try again. I've talked a few people through this process, including in the comments on one of my previous RAM repairs, Dave Stevenson wrote up the repair of his 8096. In the case of this 4032 board, it's going to be more complicated as this initially showed no errors. Checking other addresses, I got an error at address 16420 (0x4024 hex). 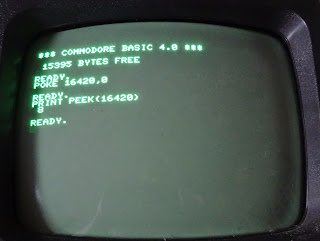 Further testing with my memtest program showed a pattern, with multiple bits failing at addresses in hex always ending in 2 or A then 4 or C.


This repeated all the way up to 0x7FAC. It seemed unlikely that the entire bank of upper RAM was faulty, so I spent a while looking at various addressing issues that could case this, but given the bank swap had shown there was a fault, and that only the DRAM chips are involved after those resistors, it had to be the RAM chips. The error pattern had only bits 3 and 7 changing, so I took a punt on bit 3, since I'd already seen it appeared to be stuck high at some location. That reduced the number of errors, so I replaced bit 7 as well. Replacing those two DRAM chips and the Pet booted up and reported 31743 bytes free, as it should be. It appears the addressing was being messed up by UA4, and there were some faults in UA12.

I managed to find some spare 4116 chips which were a good match for the originals, the same make and model and the date code 6 weeks later. If I was keeping this board, I would have been tempted to remove the sockets and solder the two replacement chips to the board, but I've left the sockets in place in case the board's owner has any problems in future. 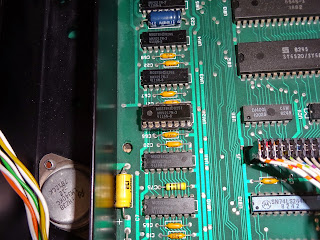 With the new RAM in place, the system was up and running and detected 31743 bytes free as normal. Running memtest again, it passed with no problems. 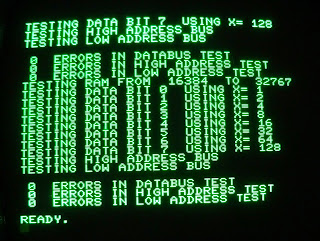 It's a hard life for me, I had to test this again thoroughly with things like space invaders and down. 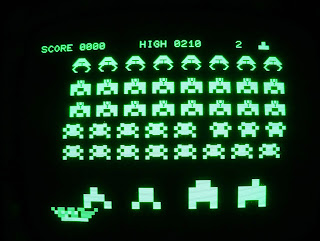 Also, at the request of the owner, I tested Colossal Caves adventure. We had spoken about this a while ago, he had remembered playing this on a Pet, but couldn't find a version of it. I finally located a D64 disk image of Colossal Cave, this was actually a port to the pet by Jim Butterfield. 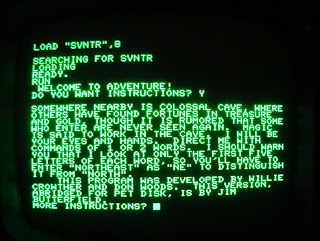 To load the D64 disk image, I used my prototype pet microSD drive - this will soon be available, register your interest now if you want one of the first batch. 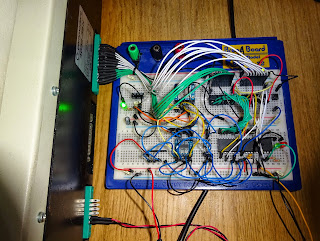