You occasional find an old computer where the owner has said it blew up. Now you may think this is fanciful and related to the TV and movie attitude that computers blow up when they go wrong, or if you ask them too difficult a question. However, what they are describing is probably the mains filter capacitors failing. You get the same sort of low value capacitors filtering the mains on power supplies on computers like the BBC micro and Apple II. 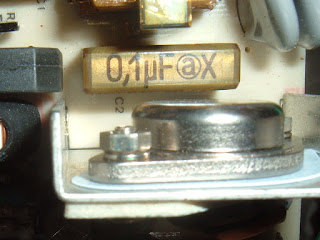 Over time, these dry up and eventually crack and fill the room with acrid smoke. You can see the progression on the three caps on the bottom row, from three different BBC Micros. The left hand one looks OK, the middle is starting to crack and bulge. The right hand one fell apart whilst being removed. Had that been powered up in that state, it would have gone bang. 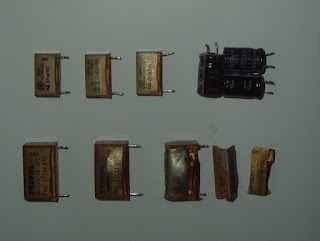 I now tend to replace those on BBC micros before I power them up these days, once you've had one or two do that, it's worth the effort. [UPDATE: one of these had gone bang in the ICL One Per Desk I recently repaired] 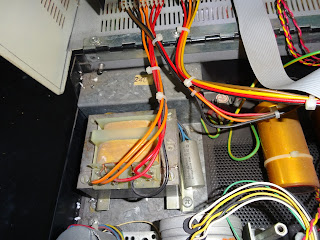 The Commodore PETs and Commodore disk drives use a separate mains filter, in a can. These too have a tendency to go bang in their old age. This is an 8250, the mains filter is the thin metal can on the side of the transformer. 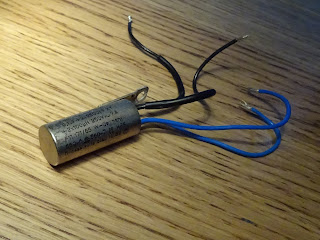 Here is one that has been removed. It is marked

Or a line filter with a 0.1uF capacitor across the mains and a pair of 2500pF capacitors between live and neutral, and a pair of 100uH inductors between input and output. The purpose of these filters is reduce noise generated by the PET being fed onto the mains. This would have been a problem in its day as there were still may simple radios and televisions which did not include power supply regulation, so were sensitive to mains noise, particularly on AM radio. These days there aren't many of those in use, and there is so much noise introduced by switched mode power supplies in computers and phone chargers etc. it's hardly worth the effort. 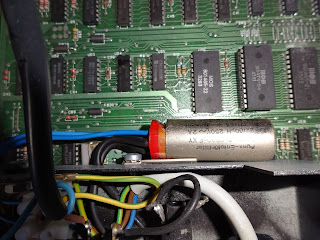 This is an 8032-SK I'm about to start work on. You can see the red section has been partly pushed out of the can. 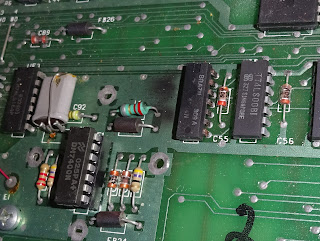 There is also evidence of soot on the board beneath. So this presumably exploded at some point the past. The are modern equivalents, but in this case, I am just going to remove it. The mains input goes through this device, so to remove it, it has to be bypassed. 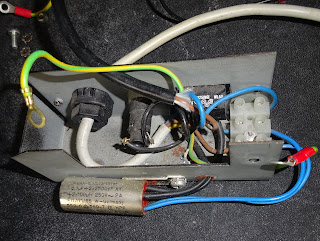 Confusingly, the two blue wires are the inputs to the filter, and the two black wires the outputs. The four terminal blocks on the 8032-SK are normally wired as follows, starting with the nearest the back of the case. 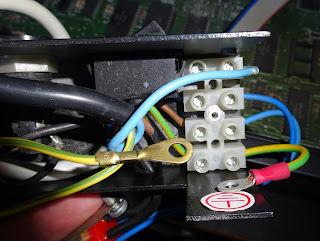 The final black wire out of the filter is live out. This is soldered to the input of the fuse holder. From the fuse holder out it goes to the switch and the switched output is soldered to the wire that feeds live to the transformer. If you're doing anything with these, just take a while to follow it all thorough and don't trust the wire colours. The usual caveats about the potential side effects of death when fiddling with mains should be noted. 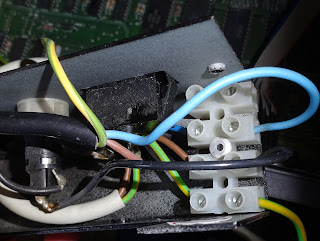 A quick way to do with is to remove the three wires from the filter that are screwed into the terminal blocks, and then cut the fourth wire close to the filter can. Take this wire back through the hole in the metalwork and wire it into the third terminal block (live in). The blue wire which is neutral to the transformer need to be moved down to the second terminal block (neutral in). 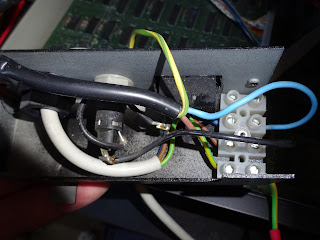 I prefer to do a slightly better job and desolder all the wires and redo them all in the correct colours and with a bit of heatshrink to better protect the terminals. I do this when I'm doing a full restore, removing everything, cleaning and remaining the metalwork then reassembling. This is is still do be fully cleaned up, but the wiring would be something like this. 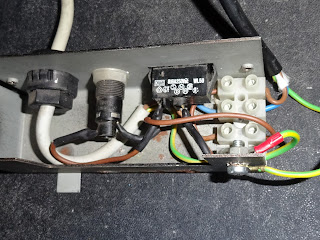 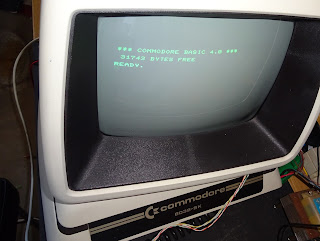 The 8032-SK now has power again. The monitor works (the signal coming from my 4032), but there is no video out from the main board. So a few more things to be fixed - more on those in a future post. 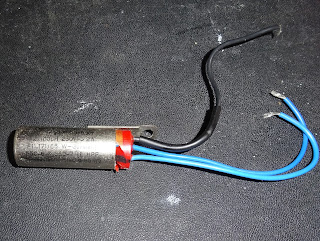 I normally remove these before they get a chance, but this one has already gone. Time for some investigation. Dremel powered tear down time. 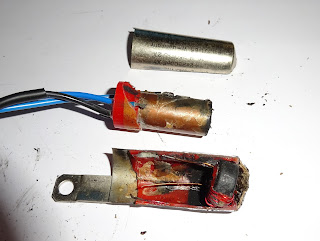 The internals are fixed to the metal can, so the easiest way in was to cut the can off. Inside you can see the full horror show. The ferrite cored inductor at the top and the main capacitor in the middle. 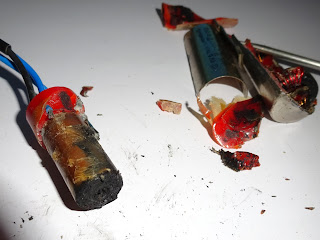 That must have created quite a bit of smoke to push the end cap off, I'm pleased that didn't happen to me.
Posted by Dave Curran at 13:38