Went working on old computers, there is always a problem with getting hold of replacement ICs. Some are easier than others, WDC are manufacturing modern versions of the 6502, 6520/21 and 6522, and there are still supplies of various types of RAM. One of the more difficult to replace is the 6530. 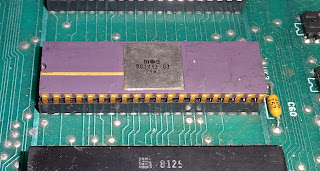 This is an early MOS chip used in Commodore PET disk drives. It is an RRIOT, so called because it contains, in a single chip, ROM, RAM, I/O and a Timer. So this can be used to reduce chip count. Because of the ROM part, this means it is a programmable part, and so not only do you need to find a 6530 to replace a faulty one, but it has to be one with the right ROM code in it. And just to help things, they are all marked with Commodore part 9018xx-0x part numbers. 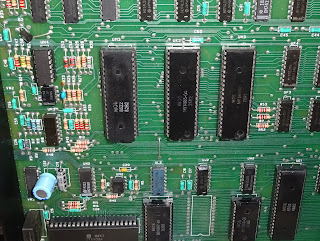 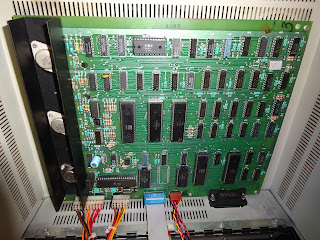 Inside the 8250, there is no sign of the promised reduced chip count in there. In total, there are: 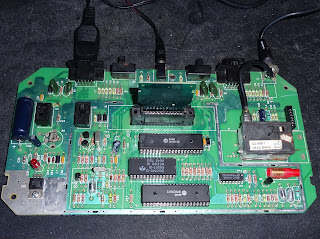 The 6532 is still available, and is a good place to start to replace a 6530. It has the RAM (actually, it has 128 bytes, the 6530 had only 64 bytes), the same I/O and Timer, so all it needs is the 1K ROM. This can all be fitted on a plug in board. This has been done in various ways before, such as this 6530 replacement, this my interpretation, along similar lines. 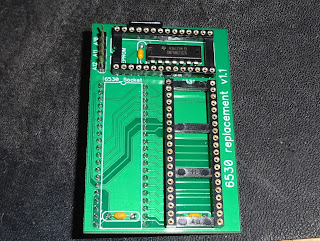 There are pins on the bottom to plug into the 6530 socket (annoyingly the pins are in a different order to the 6532), a ROM chip and a 74HCT02 NOR gate to enable to ROM chip as required. 8K is the smallest size ROM I can easily get, so  I've added jumpers to select the appropriate ROM image. I have put images for 5 of the 6530 ROM dumps from zimmers.net, including the one in the adapter board on the 8250LP. With those ROM images, this board will replace the following 6530s:
It may be suitable for other 6530's, but there is another layer of complexity. There is some additional programmable logic in the 6530 to set the addresses of the devices within the chip. All the disk drive ones are the same, so this board can be used for all of those. Any others would need to be checked to see the expected address map. 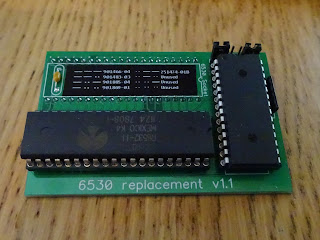 With the ROM and a 6532 installed, and the jumpers set, it's ready to go. That all plugs into the 6530 socket and this 8250 dual disk drive is now back up and running nicely. 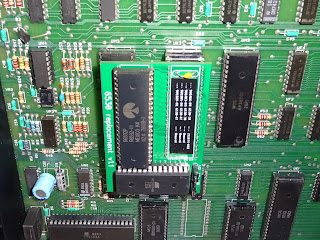 There doesn't seem to be any issues with clearance as the 8250 case is massive. Testing that with the 8250 diagnostics, it passes all the drive performance tests fine. 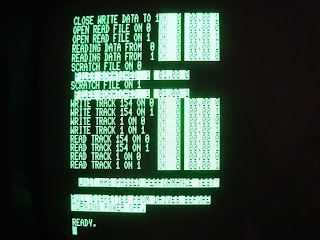 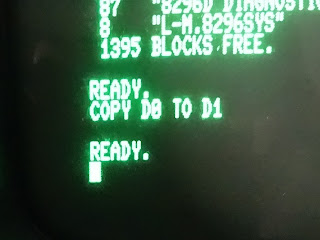 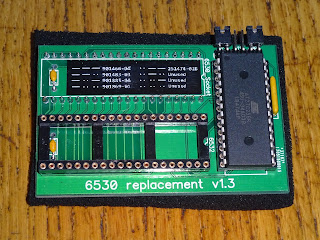 As usual, I've got spare PCBs left, these are available from my Tindie store.
Posted by Dave Curran at 08:14