I don't normally do unboxings, but here is a nice boxed Commodore 1571 disk drive. 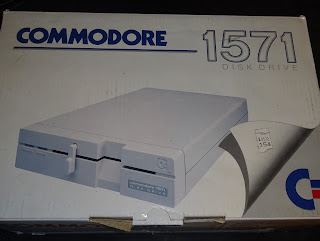 Inside it's all very clean and everything seems to be there. 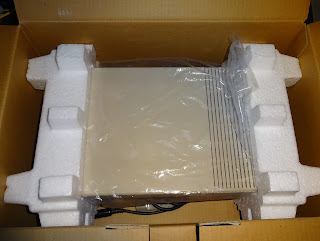 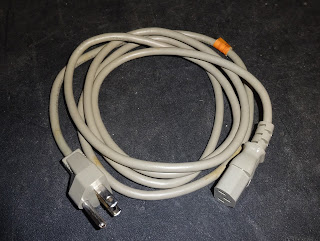 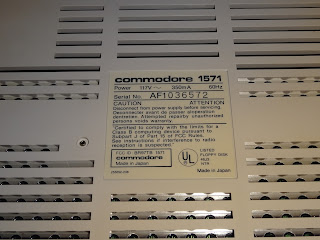 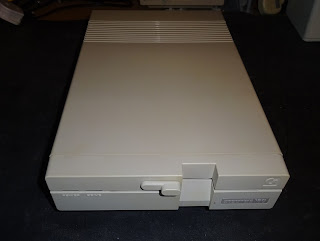 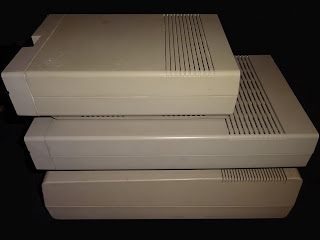 It's also slightly wider than all the others. 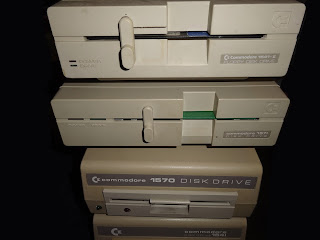 The reason it's larger than the 1541-II is they have returned to having an internal power supply. On the back is AC in, power switch, IEC connectors and address selector switches. No sign of a voltage selector switch though. 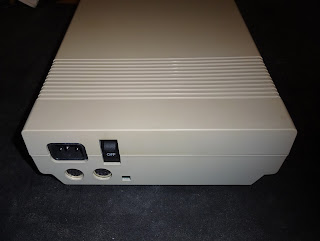 Inside, I was hoping there may be a jumper to select 220-240 V operation, or a transformer tap that could be switched around, but no sign. 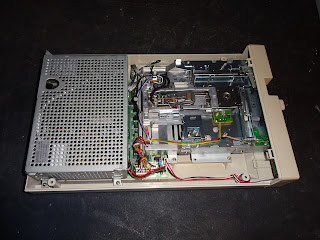 The large metal box at the back is obviously the power supply, nicely modular with the mains connector and power switch on one side and a 4 pin power connection to the mainboard on the other. 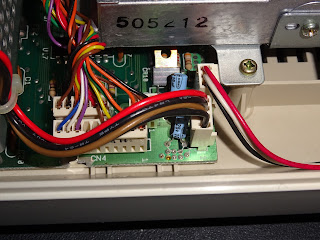 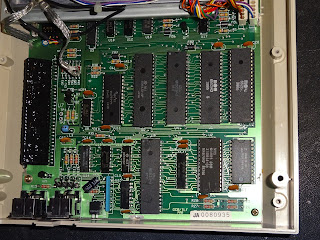 Inside the power supply cage is quite neat, just an off the shelf TDK switch mode power supply. Looks a good quality unit, no signs of capacitor leakage or worn out parts. 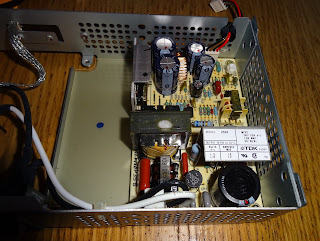 This is rated 1.0A at 5V and 1.2A at 12V. It also confirms it's not a universal voltage model, 100V/115V only.  I always think of the US as 110V, but I guess these are all approximate figures, it says 117V on the label on the bottom of the case, which seems unusually specific. 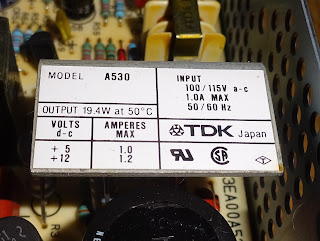 Doesn't look like there's an easy way to switch it to higher input voltage, at least the main capacitor would need to be upgraded as it's rated 200V. It's a discrete switching circuit, so the timing may need to be changed to cope with a higher voltage / lower current input. 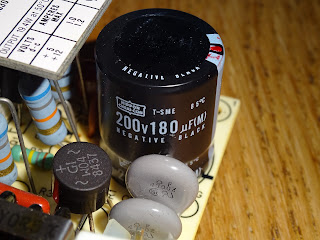 Or I could just swap the whole power supply board with a similar one. 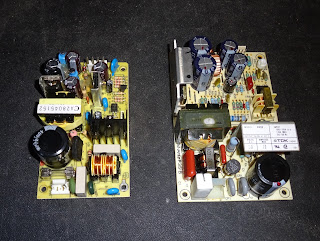 The one on the left is the new board, this is a Mean Well PD-25A power supply, which is 100-240V input. It's new and unused, from a box of these I picked up 10-15 years ago, so doesn't look that out of place in the 30 year old drive. (UPDATE: apparently this is still a current model) 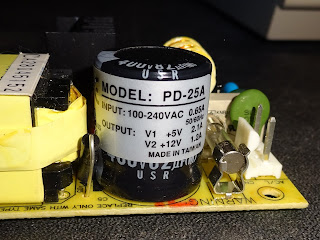 It is rated 2A on the 5V line, double the old one, and is the same 1.2A on the 12V line, so there should be no problems there. It's physically smaller, but should be a fairly easy swap as there is a lot of space inside the cage. 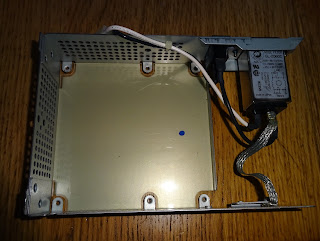 The mains filter is rated to 250V. I don't think these are the type that explode, so I'll leave that in place. [Update: actually I think they are, I will change this for a standard socket at a later date] Likewise the power switch is suitably rated, so no change on the mains input side. 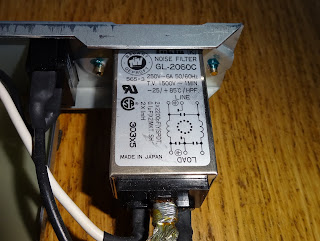 As the board is smaller, I've made some brackets out of earth tags soldered together and bolted it in. The screw in the far corner is the one connected to mains earth, and is the one directly mounted on the original pillar. 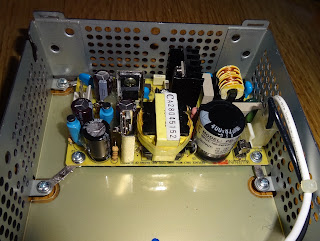 The mains in connector is the same as the original, but I needed to make a new DC out cable as the connector was larger on the new board. 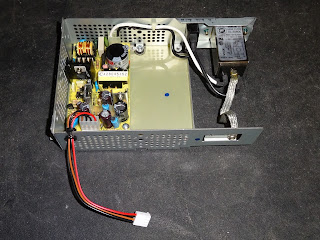 With the cover replaced and it back in the 1571, you would hardly notice the difference. 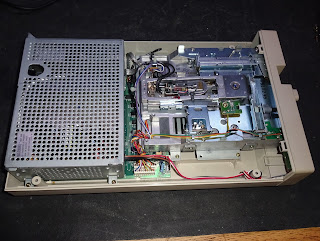 As the new PSU is 100-240V, it will still work in the US, so the original label is still valid, but I've added a sticker to indicate it is also suitable for use in the UK or Europe. 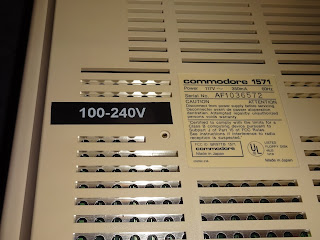 Time for some testing. The test setup is officially too bit to fit in the frame. 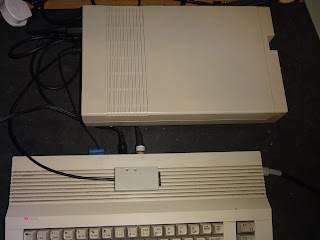 Looks like a very nice drive, passed all the diagnostics tests, track alignment is good. 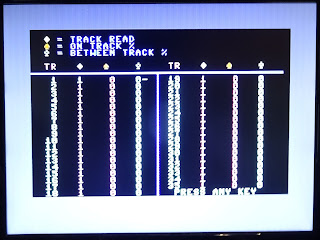 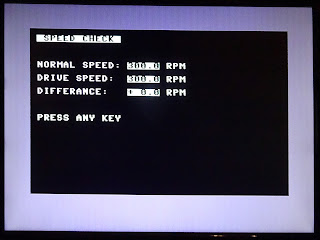 Passed all the read / write tests. 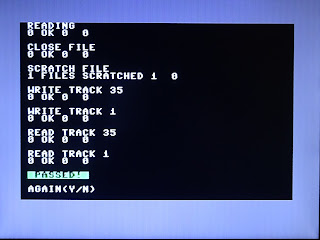 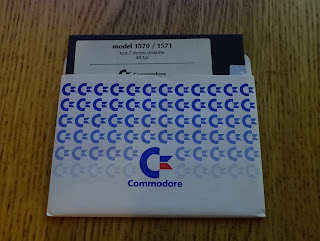 I've written a set of CP/M disks from disk images using CBM command. That's also a good test of the drive, seems to be working nicely. 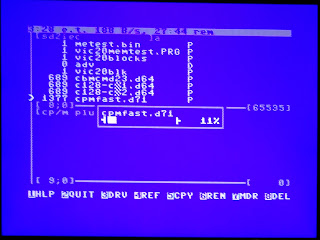 I've got a couple of Commodore 128's to repair, so I thought it would be good to have the matching 1571 drive ready to go with those.