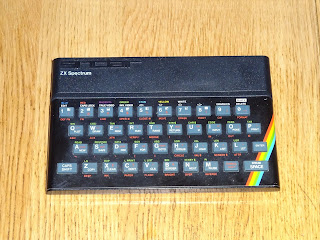 The Harlequin is a clone of the ZX Spectrum using standard TTL parts. Based on Chris Smith's excellent book 'The ZX Spectrum ULA: How to Design a Microcomputer' which documents reverse engineering the Ferranti ULA within the Spectrum. The Harlequin is an implementation of that reverse engineered design, it has been around for a number of years, and currently seems to be fairly stably on revision G. 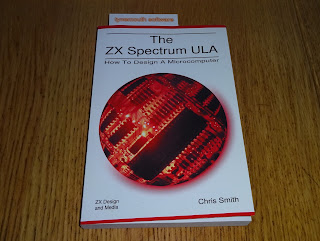 I've been tempted a few of times to buy one of the assorted bare PCB 'Harlequin' boards on ebay, but was never sure if they would work. I was then contacted by someone who had bought a kit of parts and a PCB and had built it and it didn't work, and they wanted me to fix it. 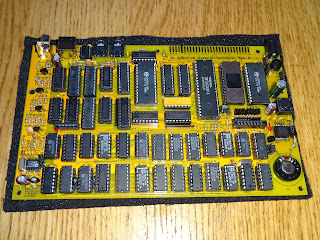 As a sweetener, also included was a second PCB and a partial set of parts they had bought intending to build a second one, but never completed. This was my fee for a successful repair, sounds like a deal to me. 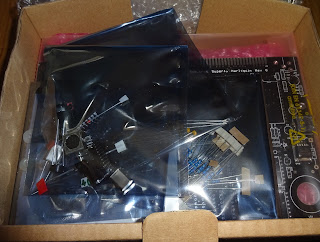 The yellow board they had assembled looked OK to me, the soldering was good, the parts were all in the right place. I decided I should have a go at building the second one, so I had a reference to compare it to. 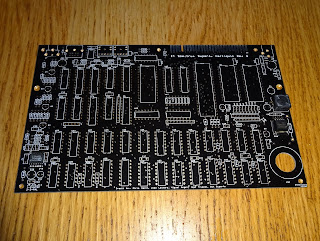 This second Harlequin, has a nice looking black PCB, and is supplied with the three surface mount parts already fitted, and a good set of instructions and a parts list. I don't normally like black PCBs, but I'll make an exception in this case, although it will make debugging difficult as you can't see the traces. 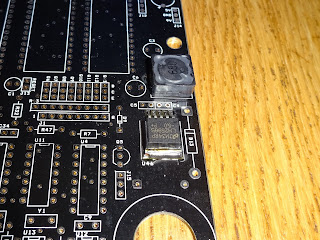 The design specified 74HC series chips, I don't normally keep those in stock. I think the original 74LS and modern 74HCT parts are better suited to repairs I do, but this is a complete unit, so the time to order a lot of 74HC chips. One part which was slightly unusual was a row of 2SA1175 'E-Line' packaged transistors, I couldn't find these from any of my usual suppliers, so had to resort to ebay. These little tester are great to check that what you have is actually a transistor, the pinout is right and the performance is approximately what it should be. 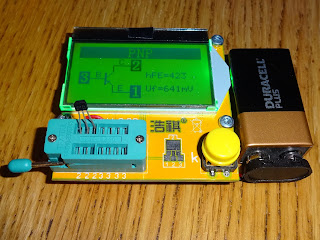 Construction was pretty straightforward, following the usual patterns of installing the smaller components first. I wanted to do this properly, so I went for decent quality new parts and turned pin sockets etc. and tried to keep things neat. I went for good old 4 band, 1/4W, 5% carbon film resistors as I have been doing those colour codes automatically in my head for over 30 years, whereas the blue 5 band ones I've always got to think twice to work out the value. 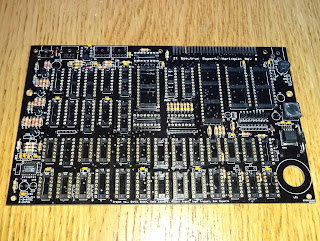 There are a few electrolytic caps on the board, and they were very specific about the lead pitch in the parts list, even two different pitch 220uF parts. I was concentrating on getting caps to fit those requirements, and ended up with ones that were the right spacing, but a bit too tall. 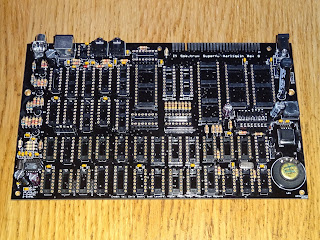 That's all the parts fitted now, other than the ICs. I had a good look around the board at this point to check for any missing parts or bad soldering. Yes, R37 is missing, it's optional (trimming for the tape load circuit). All OK, time to power it on. I checked around the board and the 5V rail was live, and the current draw minimal. OK, time to install all the chips. 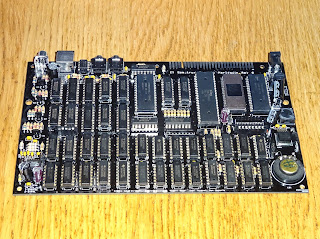 I've gone for almost matching Texas Instruments chips all around, is that OCD? The EPROM is the one that was fitted to the other board, as this had ZX Spectrum Diagnostics on it. Time to bite the bullet and switch on. 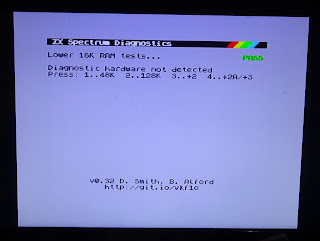 Success! At this point I was trying not to feel smug. I failed. Smug mode on. 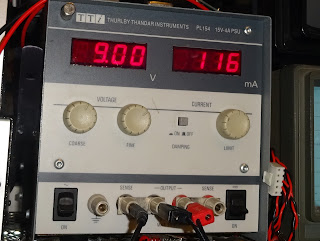 A quick check on the power supply, it was drawing around 116mA at 9V, looks about right, nothing getting hot. 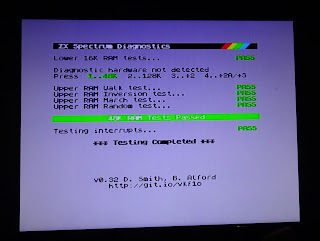 I plugged in a keyboard and pressed 1, and let it run through the tests a few times. This was V0.32, V0.33 is now available from the ZX Spectrum Diagnostics site. 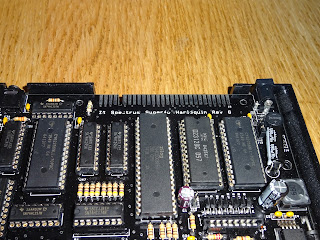 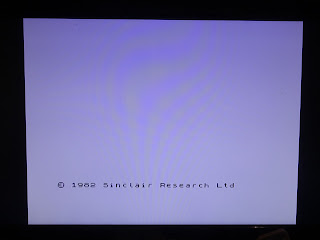 Simple BASIC programs run fine, the picture is nice and clear, this is an LCD TV fed via composite video. 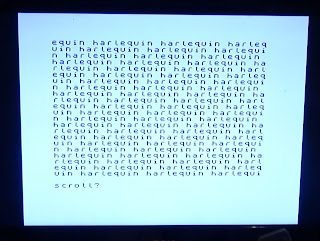 There is an RGB socket, but that required cutting the case and making up a custom lead, so I'll stick with the composite video for the moment. 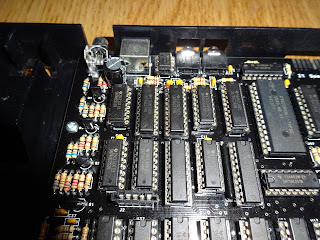 I loaded a few games via tape and it seems to be a very good clone, everything worked as expected. 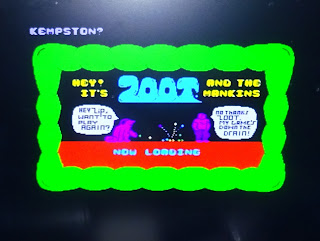 One of the reasons for building this is to test something I've been working on recently, pleased to say it ran well on the Harlequin board. More on that at a later date, for the moment I have to disguise it's identity, so I am writing this in an actors voice. 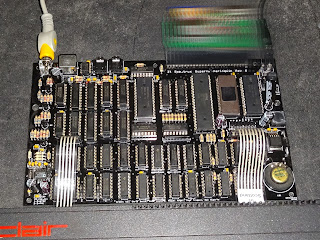 I'll need to get some alternate capacitors as the ones I fitted were too tall for the original rubber key 48K Spectrum case. For the moment, I have installed in it a Spectrum+ case and it is running very nicely. 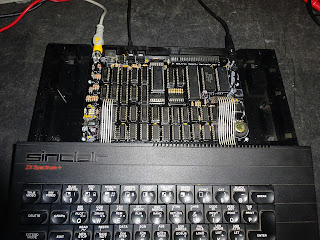 I was planning to write up a separate blog article on repairing the other board, but it doesn't need it. The only part I had found that looked wrong was the resistor array, it was 680R, but the parts list said 470R. That shouldn't make much of a difference, so I changed it. It didn't make a difference. 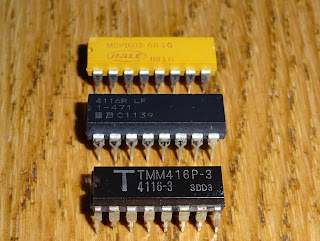 It's worth noting the part number of the replacement 470R resistor array (centre) is 4116R. Not to be confused with the 4116 RAM chip (below) which would have been in the original Spectrum. I left it in as it seemed a nice touch to still have a 4116 in the Spectrum. Even with the more asthetically pleasing resistor array installed, it was still dead. There was 5V power all around the board, but no video output, and no CPU clock. I started back at first principles and check for the a signal on the 74HC04 which generates the clock. 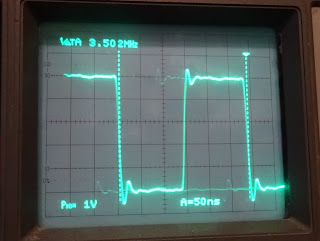 That's a nicer clock than you would get in a real Spectrum, so that shouldn't be a problem. I traced it through the board, where it is dropped to 7MHz, and then to 3.5MHz, and checked along all the counters which generate the video sync pulses, all seemed to be fine. I checked the circuits which generate the characters, again, all looked good. By the time I got to the composite video connector, the signal was still looking fine. I turned the monitor on, and was greeted by a picture, (c) 1982 Sinclair Research Ltd. 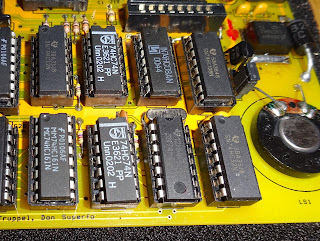 Slightly confused, I turned off the power and swapped in the diagnostics ROM and switched it back on. Now it was dead again. I know that ROM was OK as I used it in the other board, so back to the oscilloscope. As soon as the probe touched the pin on the 74HC04, the speaker made a beep, and the diagnostics popped up on the screen. 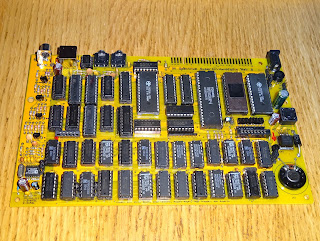 This was repeatable, it wasn't a bad joint, it seemed the load of the scope probe was enough to get the oscillator running. I replaced the 74HC04 and tried again and it started itself and now runs fine, so all that was down to a flaky 74HC04 chip. That's packed off back to it's owner, and I'm back to playing Jet Pac on my Harlequin board.