As part of the testing of the DivMMC future, we tried to use a range of machines of all different types and conditions. Some pristine and working perfectly, some upgraded and recapped, some in pretty poor condition. 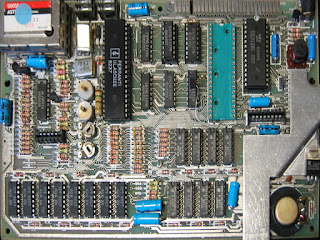 This was a fairly bad one from my 'broken' pile. This is an early-ish issue 2 board which arrived in this condition inside a 48K rubber key Spectrum from ebay. 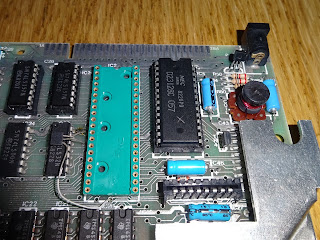 The first obvious issue is the missing Z80 CPU, not a standard socket, so it's probably been repaired in the past. Also note the ROM is marked with an X, presumably someone has tested this and found it not working. 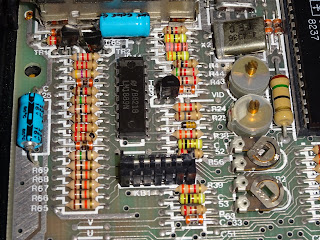 Like most issue 2 boards, the transistor mod has been done to the CPU. However this ones has not had the clock mod, this is the original version of the clock circuit with the diode and 3K3 resistor, and no pullup on the clock line. See my previous post about reverting a board to this state and earlier. 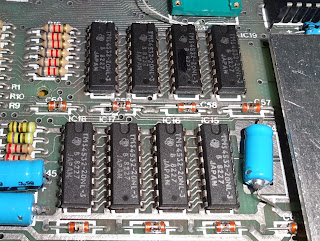 As well as the cross on the ROM, there are also marks on one chip in either set of RAM, presumably theses had been identified as faulty as well. 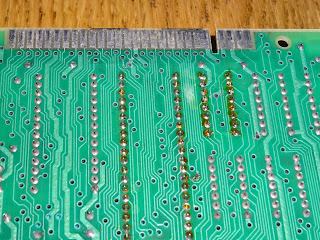 Looking under the PCB, it is obvious the Z80 has been replaced, and also the 74LS157 next to it, although the chip and socket look identical to the one next to that. 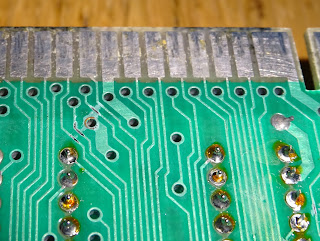 At the top, there seems to be some track damage, and that flux is a bit nasty. 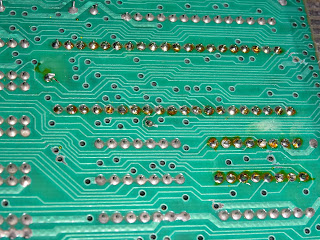 The soldering is a bit inconsistent, so I really need to remove this. 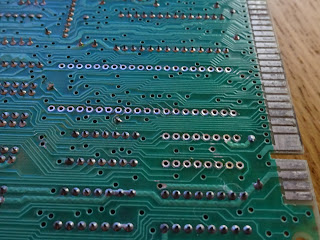 Looks a lot better with the socket desoldered and the flux cleaned up. One of the reasons I dislike sockets with a covered base is that you can't see what condition the board is in underneath it. I've lifted a few like that and found gouges in the board from removal of the previous chip which had broken tracks so it was never going to work. 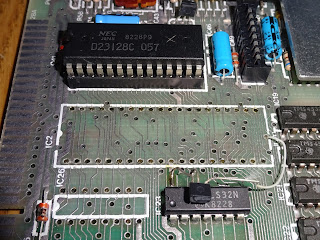 This isn't too bad, a few suspicious looking tracks, but continuity tested OK once the socket had been replaced and solder had flowed on both sides of the board. 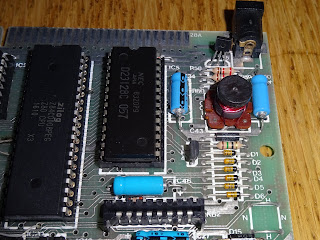 With a new Z80 installed, the next thing was the ROM, I had noticed under the heatsink that the jumpers were set for H, a Hitachi ROM, but the chip installed was an NEC, which should have the N jumpers installed. The Hitachi ones are less common, and I didn't have a spare to hand, so I changed the links to N. 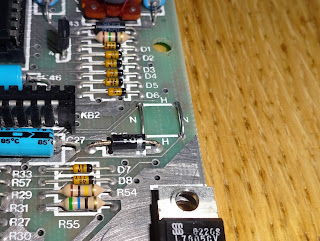 With that the machine still didn't boot, but I was now able to run a memory test cartridge which showed up a fault in D5. This is an issue 2 board, so obviously, the colour is way out. I'll address that later. 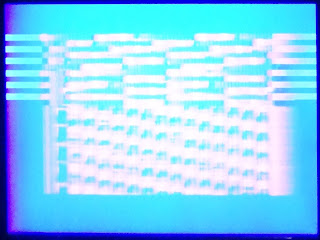 Looking at the RAM, the IC that handles D5 is the one which was marked as faulty. 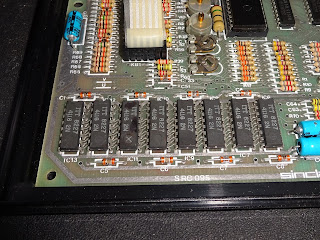 I have to agree, IC11 is probably faulty as that is the chip which provides 16Kbits of RAM on D5. 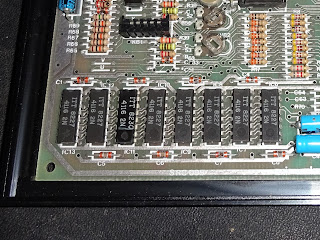 With the 4116 in IC11 replaced, the memory tests now passed, and I could adjust the colour. The D5 chip in the upper bank was also marked as bad, but seems to test OK. 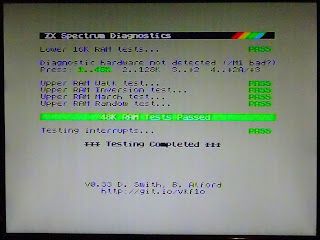 With the RAM tests passed, time to try the ROM and see if I can get into BASIC. 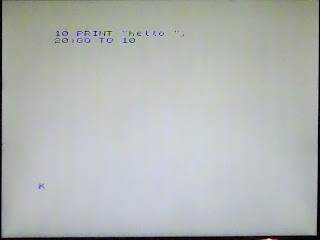 No problems with the ROM either, which is unusual as I have had a lot of issues with NEC ROMs, more on that in a later post. I presume this board originally had a Hitachi ROM and that was swapped with another Spectrum along with the CPU. The ROM was probably marked as bad when actually it was just the jumpers were set wrong. 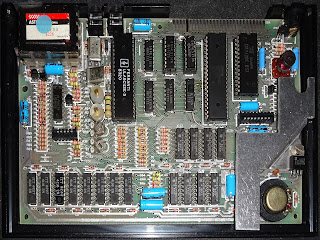 That one didn't turn out too bad.
Far fewer parts than were actually marked as faulty. 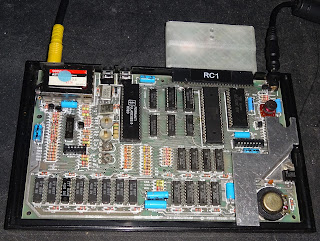 The important question now the board has been resurrected, is does the DivMMC Future work with it? 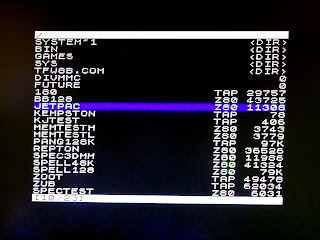 Well, of course it does. 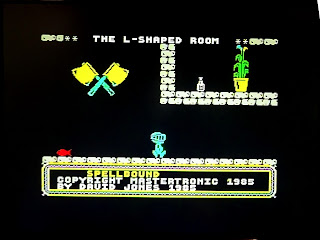 Someone asked on twitter about Jet Pac, yes, that runs fine. I found there were a few flaky copies on the internet, so I saved a .z80 snapshot from the fuse emulator, and I have been using that without a problem. 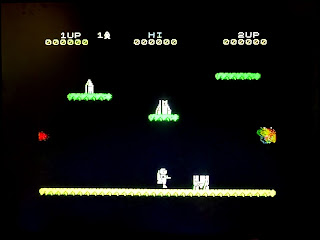 I saved after I had selected Kempston joystick, so I can just press 5 to start. 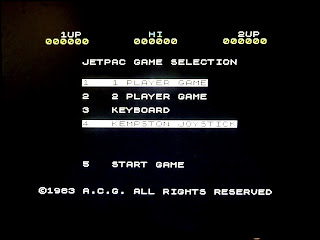 I did try some other boards and things like the interface 1 with this Spectrum, but I couldn't get them to work. The clock modification done to later issue 2 boards may help, but the DivMMC future works without the need for that. 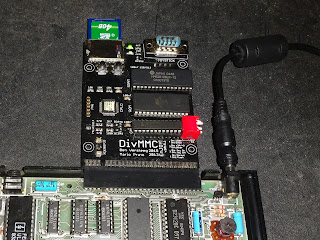 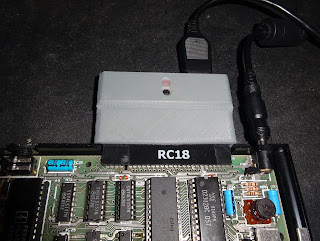 I am sure The Future Was 8 Bit would like me to remind you that the final units will come in injection moulded cases like his SD2IEC drives and the VIC20 Penultimate Cartridges. 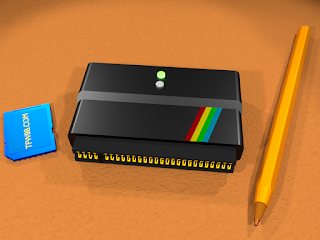 N.B. the preorders will come with a preloaded SD card, but sadly the biro is not included in the current offer. If the lack of a yellow biro is not a deal breaker, you can preorder a DivMMC future with SD card now. 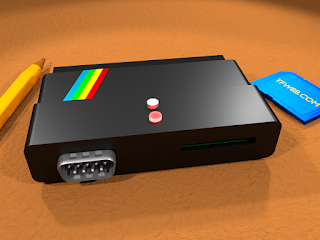 If you want to support this blog, you can donate via Patreon or Paypal, or buy something from my store.
Posted by Dave Curran at 21:15