The PET microSD is an SD card disk drive for the Commodore PET. I have been making these for a while, but they have been out of stock recently as I have been preoccupied bringing some new products to market (namely the VIC20 Penultimate Cartridge, the Minstrel ZX80 Clone and the DivMMC Future). 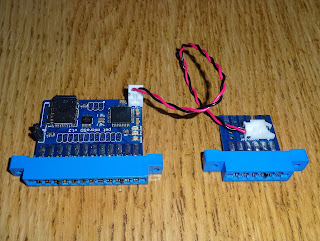 I've decided the best thing to do is to setup a preorder for the PET microSD, to gauge demand for the different types and get some more boards ordered and some more units built up. There are three types of PET microSD boards. I was hoping to simplify this list, but for the moment, I'll leave them as they are. 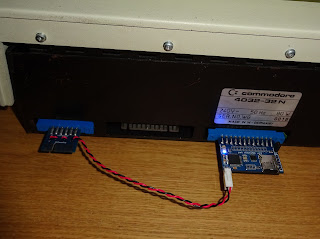 This is the original build. It sticks out of the back of a PET and is powered from the datasette port. This is suitable for any PET with IEEE-488 and datasette edge connectors (so not the 8032-SK). Note the power connector no longer sticks out as much as the version shown here. 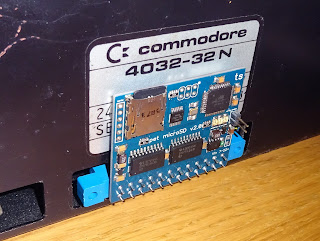 This also fits on the back of the PET, but is low profile, so does not stick out as much as the Horizontal. Again suitable for most PETs except the 8032-SK. 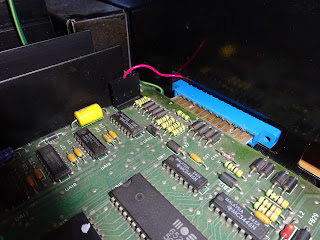 It is powered by a 9V DC tap from inside the PET, normally by plugging into the expansion power connector (J11). 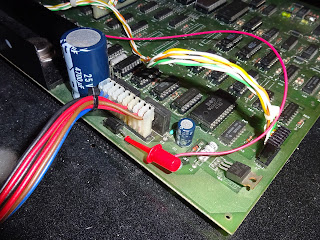 If J11 is not present, or in use for something else, it can be powered by a clip onto a diode near the power connector. The 2001 does not have J11, and the 8096, 8096-SK and things like the Super PET use J11 for expansion boards, so these would need the power clip. The rest can use J11 for power. 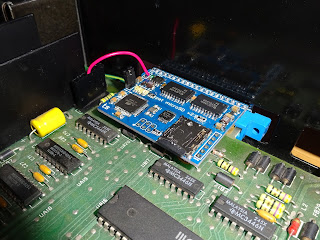 This version fits almost totally inside the PET. These is a small loopback board which plugs into the back and passes the signal back inside. This is also powered via the 9V tap as above. 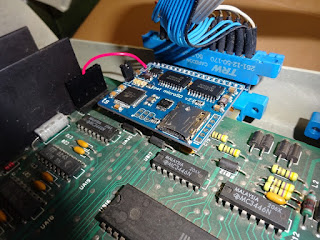 This is suitable most PETs, and these is a version with an edge connector suitable for the 8032-SK, this will allow the rear IEEE-488 port of the 8032-SK to still be used. 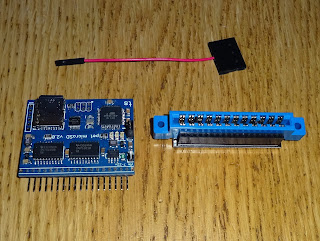 This is a pre-order for the next batch of PET microSD boards. All are supplied with a microSD card preloaded with some example software to get you started.
UPDATE:  the final batch are now all accounted for, and I have no plans at the moment to build any more, so please consider these discontinued. I am working on a replacement product, more information to follow.

If you want to support this blog, you can donate via Patreon or Paypal, or buy something from my store.
Posted by Dave Curran at 22:59