Previously on the Tynemouth Software Blog, I looked at converting a PAL VIC20 CR board into an NTSC one. This turned out to be a case of swapping a selection of parts with someone who had an NTSC VIC20 CR board and was interested in the reciprocal process.

We used the later cost reduced VIC20 boards as the process was a lot easier. They used the same PCB and it was just a case of playing 'spot the difference' and exchanging the parts. 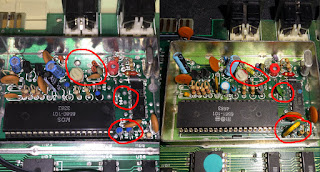 The parts exchanged were a few passive components, a crystal, VIC chip and KERNAL ROM. 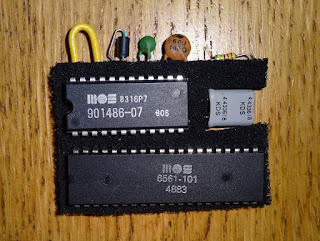 The original VIC20 board with the 2 pin power connector is a more difficult prospect as the PCBs are different between the PAL and NTSC versions. The NTSC version has a metal cage around the video circuitry, and within, the VIC chip and a separate compartment for the clock circuitry. This has the same 14.31818 MHz crystal as the later 2 pin NTSC board. 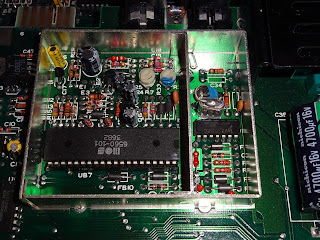 The PAL version has the outline marked, but no shielding can fitted. There are a few component differences, but most importantly though, it has an extra chip, UB10, outside of the box. This is a 74S74 / 74LS74 which is used to divide the clock frequency down. The M53202 chip looks to be a second source version of a 7402. 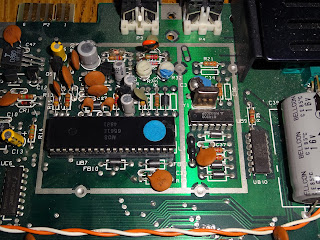 The crystal is 8.867236MHz, which is divided down to present 4.433618MHz to the VIC chip. The later 2 pin just used a 4.433618MHz crystal. Maybe they couldn't get those when they designed the 2 pin PAL boards? Or it could be they couldn't get it to work reliably. They did add several capacitors to the circuit on the later PAL boards. You can see the 74LS74 really does look like an afterthought on both the PCB and the schematic. 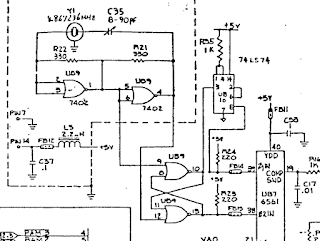 The other difference that wasn't immediately obvious is the 2 pin power connector is actually different between the PAL and NTSC models. The UK version has larger pins, and a divider between them (which makes it really easy to use a pair of crocodile chips to run from a bench power supply with no change of them shorting out). 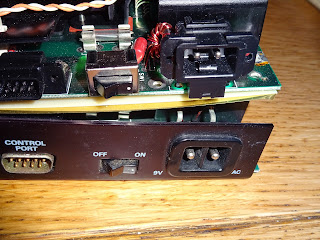 The NTSC version is smaller and also has a built in switch, which isn't used. This is presumably a socket designed for a cassette recorder type device where the batteries would be cut off when the mains plug was inserted. Rather dangerous then to fit a socket used for a mains plug, particularly when some VIC20's were disturbingly labelled 117V AC on the bottom. What could possibly go wrong? 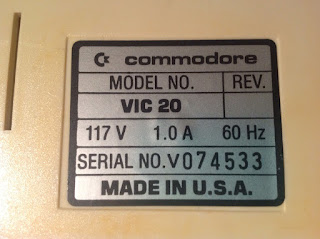 Both boards have a common mode choke on the input. On the NTSC board, there is a space on the PCB. On the PAL version, this is missing, and the choke has been used to connect the socket to the board as it is actually attached to the metal plate, not the PCB. 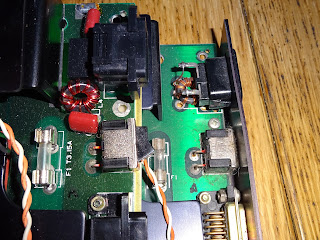 Here you can see where the wires of the choke are connected to the pads on the PCB that would have been used for the socket, and the spare pads for the switch which are not attached to anything, electrically or mechanically. The gold coloured sheet is present on the NTSC versions only and is grounded all around the base of the PCB for shielding. 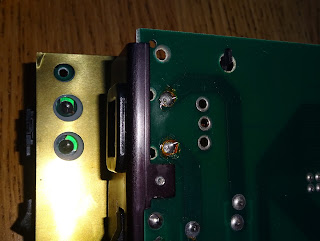 The way this worked out is that I was sent a non-working NTSC board to repair (it turned out to be a faulty VIC chip, the most difficult part for me to replace), and asked if I could send a working PAL board back. The owner had a suitable 2 pin power supply, with the smaller connector, so I swapped them around, as you can see the socket fits perfectly on the PAL board, it just means there is no common mode choke in there (not much of a problem these days as the mains is horrendously noisy already with all the cheap switchmode phone charger power supplies plugged in). 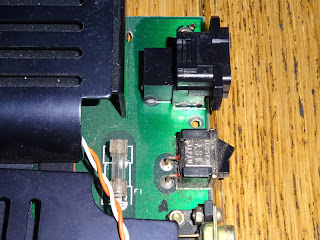 I have ended up with the NTSC board (currently awaiting an NTSC VIC chip to complete it), and have attached the normal PAL power connector, complete with it's choke, so my board is now double choked. I did consider turning the socket around and bending the pins and soldering direct to the PCB, but went for the easier (and more easily reversible) option. 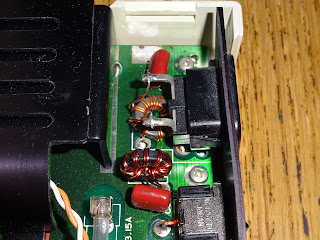