Following on from the composite video conversion I did a few months ago on a Radofin tele-sports TV game, I have modified quite a few other TV games of a similar type. 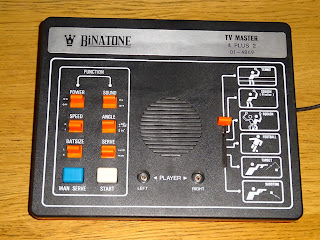 I bought this one as it is the same model we had back in the seventies when we all looked just like the family on the box. 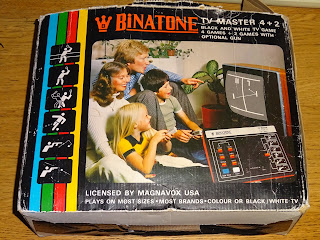 This one is a Binatone TV Master 4 plus 2, which is the same as the TV Master MK VI. This is similar to the original 4 game version (TV master MK IV), but with two additional games which use a light pen style gun. 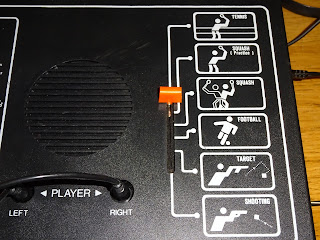 The main unit on the 4 plus 2 is identical to the MK VI other than the label. The 4 plus 2 was a cheaper version where the light gun was an optional extra. The gun works in the same way as a light pen, and depends on the timing of the beam on a CRT screen to determine it's position. It will still work following the composite video conversion, but only on CRT televisions. 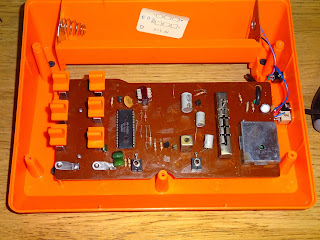 This is the black and white version, there was a colour version which looked almost identical but was marked 'Colour TV Game', and had white / grey box and buttons rather than the very 1970's day-glo orange. (date code on the chip is August 1978). 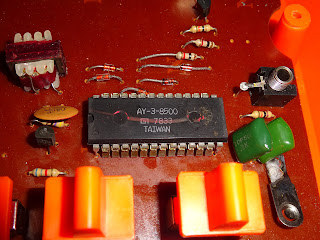 Inside is the usual General Instruments GIMINI AY-3-8500 chip, here as they often are in an unusual socket arrangement with no contacts on the four edge pins (they are used on later versions for 2 axis controls). 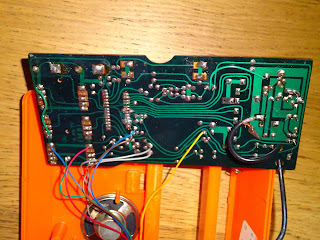 This was one of the few of these TV games I have found that didn't work. The sound was working, so it was playing, but I couldn't tune in the TV (even the old black and white portable I use for testing things with very poor video signals). The 'scope showed a valid composite signal entering the modulator section, so I just went ahead with the composite video out conversion, there seemed little point in repairing the modulator. 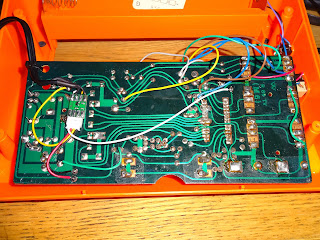 I tried something slightly different on this one, and fitted a header and a socket to the standard TFW8b composite video buffer board, that seemed to work quite well. The power was tapped at the bottom of the board, the video from the point it enters the modulator section, and the audio directly from the chip output. 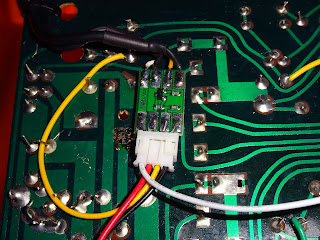 The unit has a separate switch to turn off the internal speaker, so the audio is always fed to the TV set, but you can also turn on the speaker on the game itself if you want 'the full experience'.

Once powered up, there is a nice stable signal on the monitor, in glorious black and white. 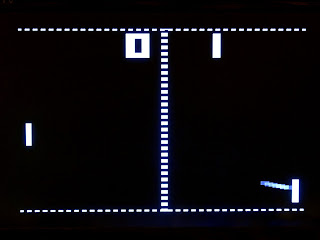 The controls on this version are as simple as they get. One rotary control, and a mono 3.5mm jack. 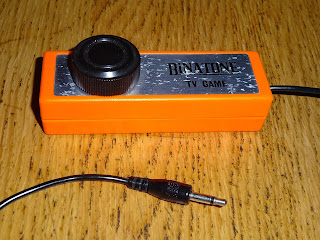 An inside, one 1MΩ variable resistor. This one was was a bit flaky, but a squirt of contact cleaner and turn it back and forth a few times and it's now running fine. 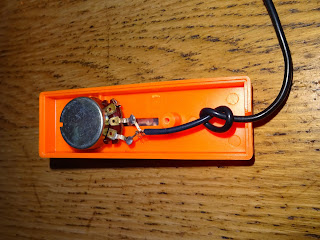 Binatone like to put warnings on the back of these to get you to only buy their power supplies. 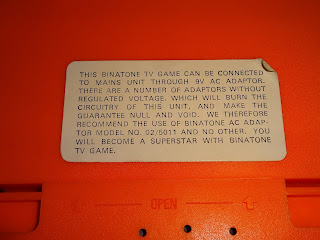 Is it regulated? Is it really? Looks like a standard unregulated linear power supply. 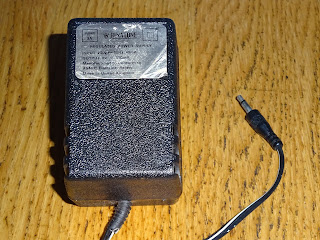 Well, I stand corrected. Yes that is a regulator. A bit rusty, but a regulator none the less. 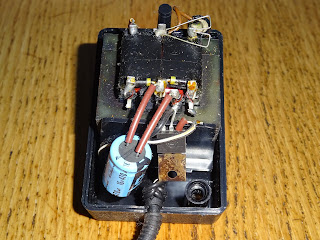 A National Semiconductors LM342P-8.0, a bit like a 7808. This gives an 8V output which matches the case, although not the 9V the game specified, should be fine... 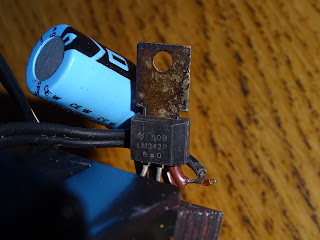 Time for some two player testing. The only time you will find football on my TV. 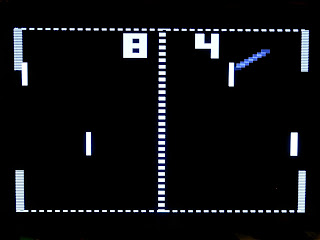