Here we have a ZX Spectrum+, and it's broken, but that's not the unusual bit. 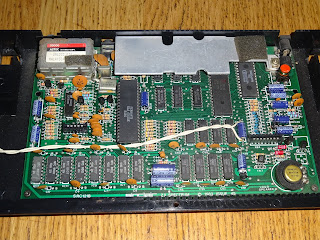 Looking around inside, everything looks good, apart from two things. Firstly, this capacitor appears to have blown itself apart, those black things should be inside the aluminium shell. 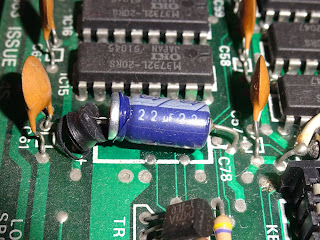 Secondly, this resistor is seriously fried. 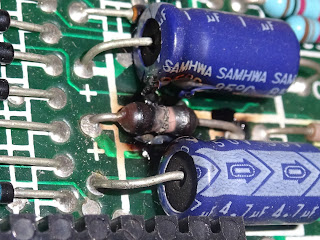 This board is an issue 4S, which is a Samsung produced board, and is closer to the issue 3B than the 4A or 4B (which is definitely a good thing). 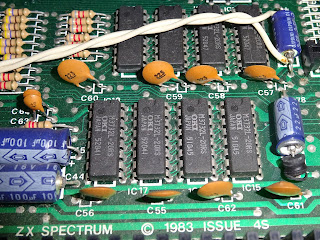 Being a Samsung model, it also has a clear membrane, which are usually still working fine these days. These clear membranes don't seem to suffer from the brittleness that affects the others. 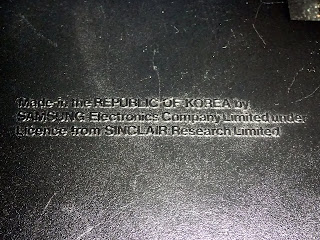 The two parts that failed are parts of the legendarily flaky power supply section. Indicated here on the schematic. (this is actually the 3B schematic, C7 is labelled as C78 on the 4S board). 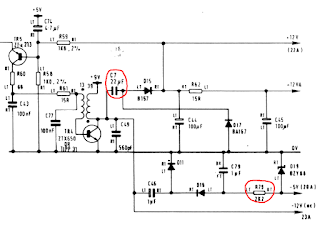 This is where it gets confusing. Answer me this please anyone. That resistor should be 2K2, and at a guess would be rated 1/4 Watt. So doing some maths, there should be around 7V across it, so the current through it would be 3mA, dissipating around 22mW, well within its capability. At the rated power of 250mW, the current would have to be 10mA, which would only happen if the voltage across it were over 23V. This is unlikely given the power supply arrangements. 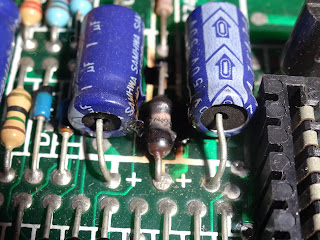 However to damage the resistor that badly and char the board underneath, it would need to be several times the rated power, which would mean the voltage across it would have had to be maybe into the hundreds of volts. There just doesn't seem to be enough power around in these circuits to have caused this. Anyone care to suggest how that could have happened? Spontaneous Resistor Combustion? 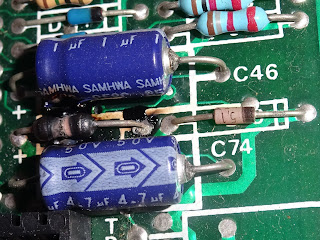 The worst case I can see would be if the zener diode had failed short (as I had seen on a previous repair of a ZX Spectrum with no -5V). It hasn't, I checked, but even then, that would have put about 12V across 2K2, which is only 5mA. No way would 5mA do that much damage, would it? 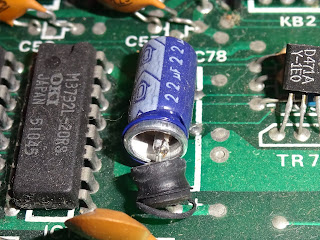 The same is likely true of the capacitor, the end has clearly blown off, which would have taken quite a bit of overvoltage. But the rest of the board is apparently unscathed? 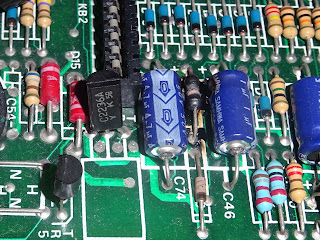 With any problem with the power supply on a Spectrum, TR4 is the first thing to blame, and sure enough, that was now acting as a resistor. 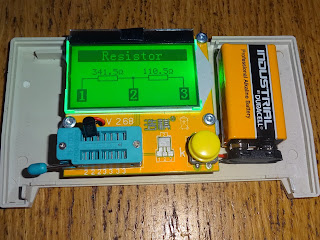 Samsung used a different part here, a BC2236A, which has a different pinout to the ZTX650 part Sinclair used. 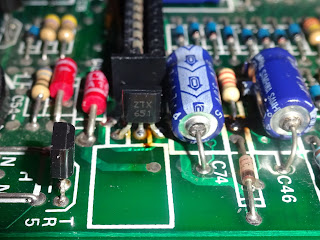 I replaced that (using the alternate set of pads with the correct pinout) with the slightly uprated ZTX651 I normally use. I had removed TR5 to test that, it did pass, but I decided to replace it anyway, also with an uprated part, a ZTX751. I still can't see how failure of these parts would have caused the damage though. 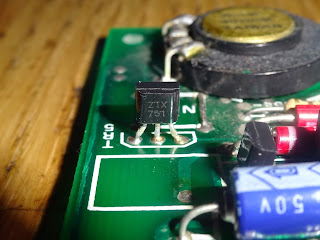 A new capacitor completed the replacements, ready to try it out. 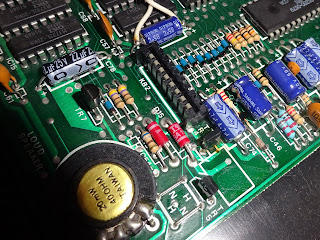 Success, we have a worker. The voltages all measure correctly, so time for some soak testing. 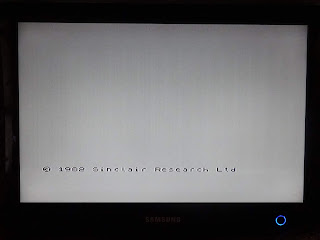 It looks like the RAM has all survived, no problems detected. 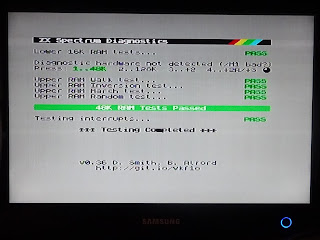 One thing I did notice during testing was the power connector was a bit flaky. 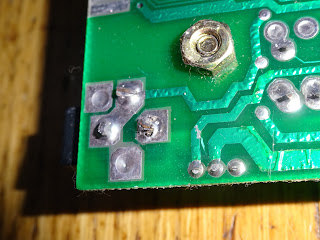 I reflowed those, but it was still intermittent, so I fitted a new connector. That's the usual sequence of events, the connector gets a bit loose or corroded inside, so the user finds if they wiggle it about, it works in certain positions. This continues for a while, with more and more wiggling, until the solder joints start to crack and the connection becomes even more intermittent. 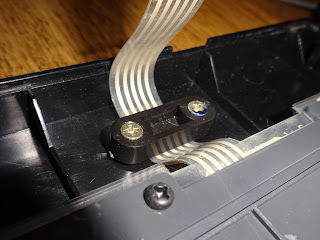 I also found two columns of keys weren't responding 5 down to V and 6 down to N, which is actually the same connection. On the Spectrum+ the membrane is 4 player (to achieve the magic of the " key pressing Symbol Shift and P at the same time) and the two clamps at the top of the keyboard need to be tightened to ensure good contact between the layers. That fixed the missing keys. 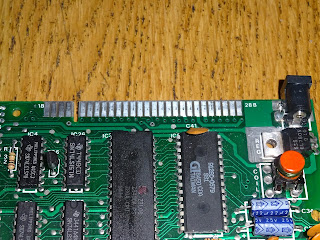 More testing, with the divMMC future and all appears well. Nothing is running hot (other than the ULA, but that's to be expected), and the voltages all check out. But I still don't know how it failed. Those components feed the 12V and -5V rails which are exposed on the edge connector, could some external voltage have got on there? 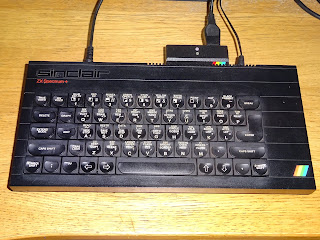 I've got some vague idea that the power supply connector might have lost it's 0V and somehow got a path back to ground via the TV lead and ended up with half mains voltage across it, but I can't quite make that add up. Answers on a postcard please.