Rechargeable batteries are great, but they don't last very long, even when not in use. I've noticed the rechargeable batteries in one camera that I don't use very much tend to need recharging almost as often as the ones in the camera I use every day. NiMh are an improvement over the original NiCads (I couldn't even find any of those to test), but they still go flat even whilst sitting on the shelf. They are great for high drain applications like cameras or games where they are likely to be drained before they self discharge. 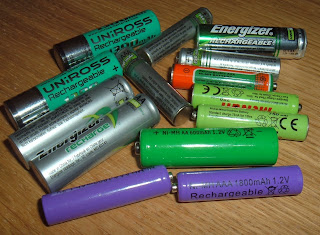 Normal alkaline batteries self-discharge at a much slower rate, but cannot of course be recharged. OK, you can sometimes partly recharge them once or twice with a PRC waveform, and I used to do this many years ago when I used MP3 players a lot. But I had too many batteries leak - after all this is not what they are designed to do. 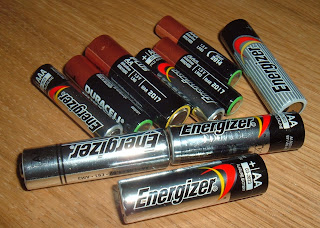 In recent years, a best of both worlds solution has emerged, 'low self discharge' or 'pre-charged' NiMH rechargeable batteries. These hold their charge for long enough that they will can be supplied pre-charged. You couldn't do this with normal rechargeable batteries as they would have self discharged by the time you open the packet. They claim to hold their charge for several years, so are suitable for remote controls, clocks etc., things you wouldn't traditionally expect to be able to use rechargeable cells for. 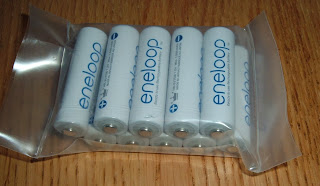 In order to test these, I bought a set of 4 AA cells back in July 2012. These were 'Uniross Rechargeable Hybrio'. They came with a set of adapters to turn them into D cells, and I installed them in a Maglite 4D torch. I did have to modify the spring it the cap slightly to make contact with the AA in the adapter. 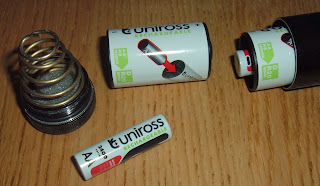 That is an 'emergency' torch, so isn't used very often, but it still works on that original set of cells which arrived charged, and hadn't been charged by me. Very impressive. I've had sets of normal batteries that were looking a little dodgy after 18 months. I took those cells out recently to see how much charge they have lost. They are rated at 2300mAh, but it only took 1100 mAh to get them back to full, so more than half capacity after 18 months plus however long they were in the packet. Based on the success of those, I've started slowly replacing all my batteries with low self discharge cells. 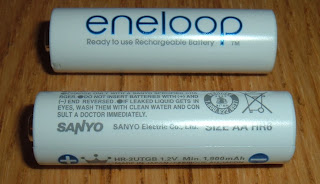 In the main, I've been buying Sanyo Eneloop's. These seem to be a good alternative. The standard ones are 2000 mAh (well, 1900 mAh minimum they say), and they work out around £1.79 each. That's cheaper than a lot of rechargeable batteries and less than double the price of a Duracell, so you're in profit after two charges, and they claim to be able to be recharged 1800 times (that's once a day for about 5 years). I get 10 for £17.85 from BatteryLogic.co.uk - I'm happy to recommend specialist sellers like these as I have been very impressed by their service (even around Christmas time), and I'm getting sick of poor service from big players like Amazon and eBuyer.

The AAA ones are rated at 800mAh (750mAh min). There are also 'XX' versions 'for professional use' which claim 2550 mAh (900mAh for AAA), although these have a lower claim for the number of recharges. 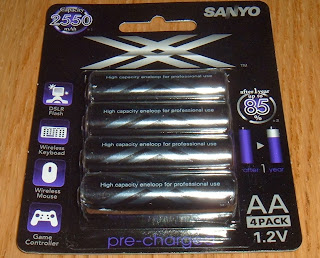 One thing to note with these and other decent NiMh cells, is to avoid 'rapid chargers'. The two hour or even 15 minute chargers tend to markedly reduce battery life due to stresses and heat generated during rapid charging. The slower overnight charges at 200mA are gentler on the cells, and overnight charging shouldn't be a problem, as you shouldn't have to charge them as often. I've tried out a few chargers and have been most impressed with the Technoline BL700 (which looks to be also sold as the LaCrosse BC700U, Accucell alpha700, the Voltcraft IPC-1L and several others). 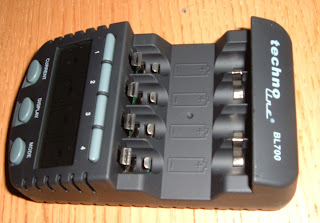 This is an intelligent charger, so it will stop charging once the cell is full and switch to trickle charge. It treats each cell independently, rather than charging pairs in series which isn't good for the batteries if they aren't in the same condition. It displays useful information such as voltage, time, charge current and amount of energy supplied. This can be used to show battery capacity if the cell is first discharged using the Test function. 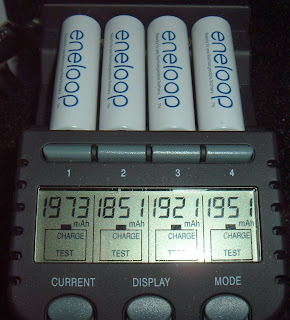 It can charge at 200, 500 and 700mA, but I like the fact it defaults to the slower (and better for the batteries) 200mA. It's also got various modes to test battery capacity by fully discharging and then charging, and can also attempt to refresh older cells by repeating the discharge / charge cycle until the capacity stops improving. The display and setting buttons are far easier to use that most of the other chargers I've had which basically have one LED (often not even one per cell), and a switch marked 'Mode' or 'A or B', which you forget what it does when you come back to it after a month or so. You can also select what to show for each cell individually. 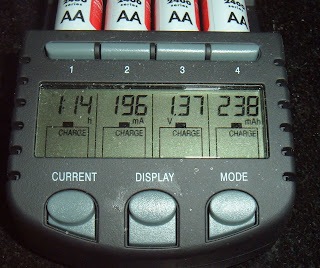 I ran a few capacity tests to see how some of the cells I had were doing. I picked the eneloop with the worse capacity from previous testing and tested it against the 2000mAh Energizer NiMh cells I had been useing in the camera, the 1300mAh Uniross ones I had before those (both of which cost more than the eneloops), and an unbranded 600mAh cell from a garden solar light. 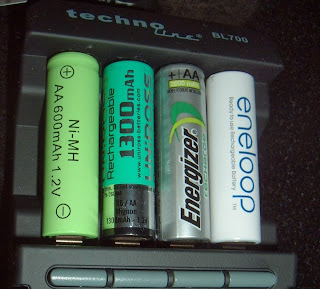 Yes, the Uniross one is the right way around, it really does have the silver band at the negative end, no one could possibly put those in the wrong way around, could they. You sometimes wonder what they are thinking of when they do things like that. 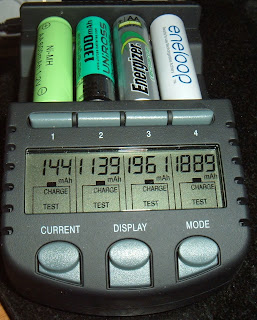 So the unit discharges all the cells, then charges them from flat. It then calculates capacity based on current supplied over time. As you can see, the unbranded one is a joke, less than a quarter of rated capacity. The others were reasonable, the Uniross one must be about 10 years old, and had been used a lot, so did quite well. I left those four cells sitting in a plastic container for a month. I checked the voltages every couple of days, and after a month, all but the eneloop were pretty much flat. The figure on the eneloop was improving, they say they can take a couple of charging cycles to get to full capacity, the other eneloops I tested were showing 1900-2000 mAh. 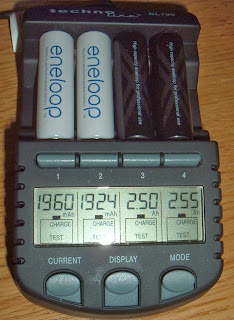 I'd also been seeing poor performance on rechargeable AAA cells used in my DECT phones, so with the test function, I've been able to go through the batteries I had and weed out the rubbish ones. The refresh function has recovered a few, but some just weren't worth bothering with. 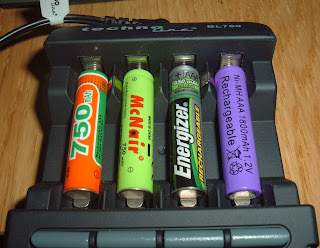 The purple cell is one of four like that which are marked 1800mAh, not one of them got even 10% of that. Most of the black Energizers failed dismally, this 850mAh was the best of the ones I tested and got 211mAh, the other two phone ones marked 750mAh didn't perform well enough to score. It's not just the test function on this unit, although it will reject some really flat cells unless you give them a quick burst in a less intelligent charger beforehand. I also tried them with a constant current power supply and dummy load and got similar results. It is a fair reflection of how they were preforming in service (badly). They've all got eneloops now. 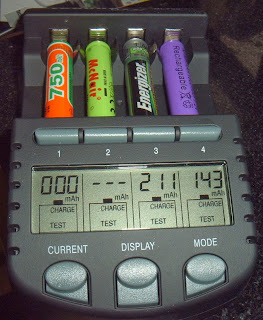 At Christmas and birthdays, I am the one with the supply of batteries ready to deal with the 'batteries not included' presents. This year, that box was full with the best of the part-used batteries I had replaced with eneloops. Apologies if this reads like an advert, it's just nice to be able to report that something works and does what it says on the tin. Do yourself a favour and get some eneloops and a decent charger.
2022 Update: The BL700 charger and the Eneloops are still going strong.
Posted by Dave Curran at 14:20