Here we have a Commodore PET 2001 board in for repair. 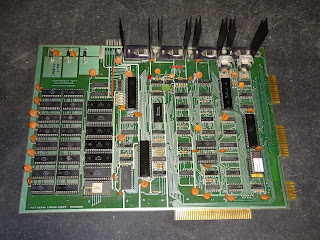 A common fault with the Commodore PET series of computers is a screen full or garbage, a random assortment of characters. This is normally perfectly static and stable, and is usually caused by a ROM or RAM fault. The PETs video circuitry runs independent of the CPU and displays on the screen whatever is in the first 1000 bytes of video RAM from 0x8000 to 0x83E7. At power on, this is random, and on most early PETs, you get a brief flash of that at power on. Once the CPU starts running code, the video RAM is filled with the space character and the screen is cleared. If the CPU cannot run due to a ROM or RAM fault, the screen remains full of garbage. 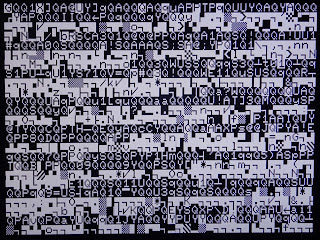 This board has an unusual fault, it is showing a screen full of random characters but with snow or noise. This noise happens on the 2001 when the screen RAM is being updated at the same time as it is being read. Later PETs got around this by adding latches into the circuit. 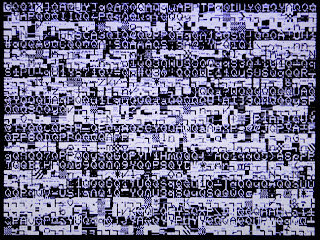 In this case it appeared the CPU was running, and the snow, the moving pattern of white dots over the screen indicated something was up with the logic that writes to the display RAM. If the video RAM is socketed, a quick test you can do is to run it without video RAM. If all is well with the circuitry for reading the video RAM, you will get a chequer board effect, as the data lines float high and all characters are read as 0xFF (displayed as ▞ - a black and white photograph of a slice of Battenberg cake). 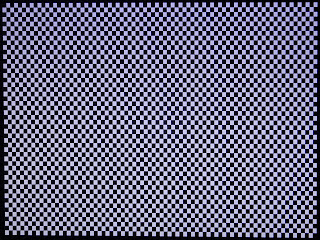 I temporarily installed a ROM/RAM board set to the PET test ROM. This alternates between displaying a screen showing the full character set, and a screen full of G or B characters (based on testing the first 1K of RAM, G for good, B for bad for each byte). This changes every couple of seconds, so it a good test here as I can probe for a signal which pulses every couple of seconds. 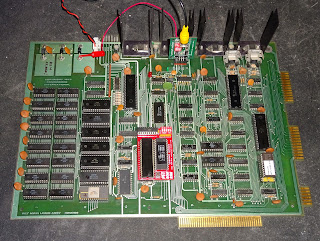 Tracing through the switching logic the signal was there up until one of the 74LS157 multiplexors. Here the output was stuck high, so was stuck in read mode. Write mode is controlled separately, and was being enabled correctly, so it was trying to read and write and the same time. 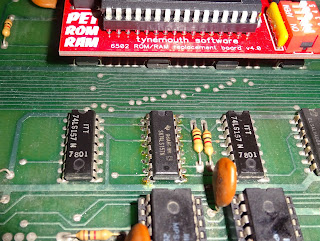 I noticed one of the three multiplexors had already been replaced. These do have a habit of failing, so since two out of three had now failed, I took the precaution of replacing the third as well. 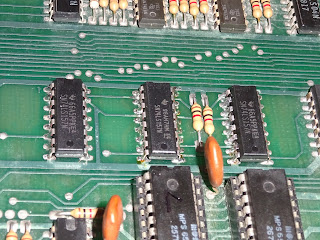 With the 157s replaced, power back on and we have a boot screen. 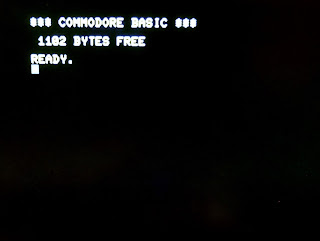 1102 bytes free isn't ideal. Looks like it's got 2K of RAM, so there is a fault in the third pair of RAM chips. These are the original MOS 6550 RAM. Not particularly reliable, neither is the 6540 ROM. These chips have lots of enable lines, which means by a clever arrangement of which address lines go to the enable pins, you can setup a bank of 16 chips in parallel without any other logic, although all it would have needed was a 74LS138. 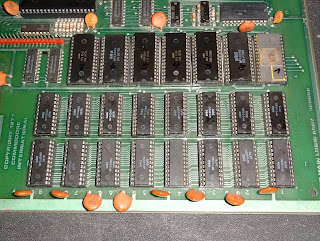 The problem is these enables often fail, and the RAM gets enabled over more of the address space than it is meant to. The same RAM is used as the video RAM, and here they are enabled all the time, so you can get away with using RAM with faulty enable lines as video RAM. Here I was lucky and was able to swap those over and get the full 8K working. 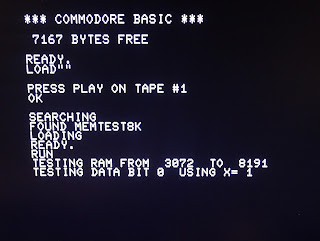 I ran the RAM test several time, and left it running for a while and repeated it, and it's passing all the tests. It's not a permanent solution, but I will leave it to the owner,  by the looks of the writing on the top of all the chips, he has already been swapping chips around. 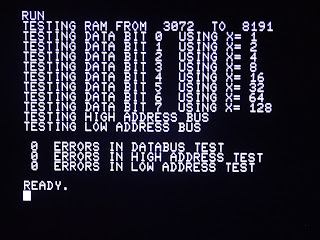 My advice of 6540 and 6550 chips remains the same. If you plan to use the machine a lot, and you have a working set of chips, remove them and put them away safely for Sunday best. For general use, get a ROM/RAM board - now available from my Tindie Store. 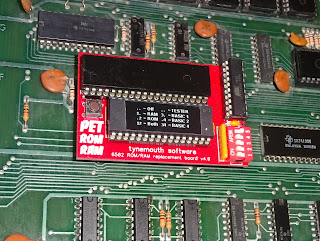 Not only does it save wear on those chips, it reduces power consumption (from 3A down to 1A), and you get to select the RAM size up to the full 32K and the BASIC version, 1, 2 or 4. 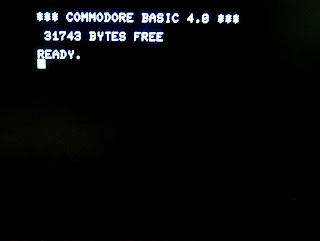 2022 Update: The redesigned small version of the PET ROM/RAM boards are still available from  TFW8b.com
Posted by Dave Curran at 10:54