Here we have another Commodore 8032 in for repair, this one looks in reasonable condition this time. 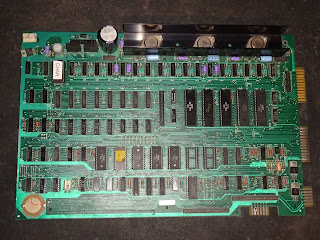 Although I was a little worried when I opened the box, bare boards in polystyrene is probably not a good idea for a static point of view. However it did at least provide good mechanical protection during shipping. 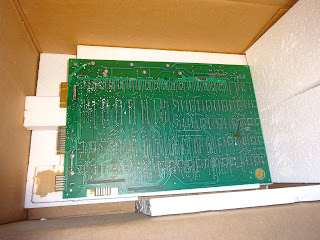 This one is slightly unusual in that the regulators and transistors are all bolted down, apparently from the factory. See my previous post about riveting on replacement regulators. 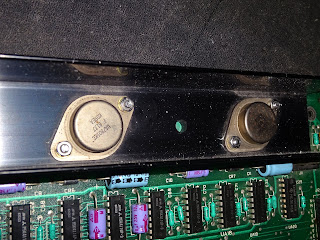 This is the first time I've seen one that appears to have been bolted on from new, including what I'm sure are the original untouched TIP29 datasette power transistors. I see no reason why anyone would drill the rivets out and replace them with bolts if they weren't faulty. Later PET boards (and all the VIC20 and C64 machines) had the regulators 'flapping about in the breeze', presumably to add a little air cooling rather than heating up the PCB. 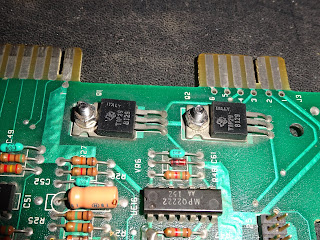 The rest of the board looks fine. Like the previous post, this one is from Germany, so has an alternate editor ROM and character ROM to support some inflected letters. 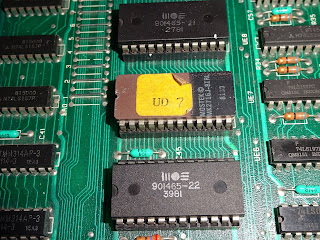 The fault report (helpfully taped to the board) on this one is it beeps (a good start, the CPU, address decoding, KERNAL and editor ROMs and at least some of the RAM and IO chips are working), but it is displaying 'some random characters'. 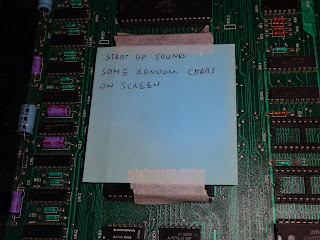 Oh yes, so it is. Time for PET Diagnostics and see what's going on. 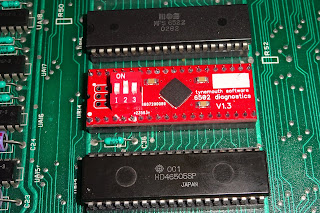 The results are interesting, time for some analysis. 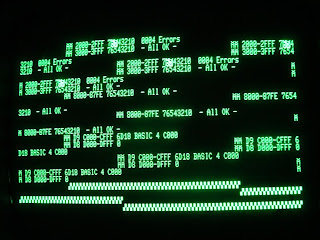 So again, many things are working to get this far. When you see a garbled display like that, it's normal the multiplexor chips that have failed. The 74LS157 switch very quickly between the processor address bus and the video address bus (generated by the 6545 CRTC). This is the later 'universal dynamic PET' board, which can be 40 or 80 column by changing that row of jumpers (old blog post on converting an 8032 to a 4032). 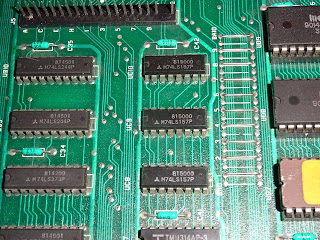 What normally happens is they some of the bits get stuck, and you work out which ones by counting the size of the blocks of repetition or blanks. Here you can see we get 16 characters then a repeat, then 16 OK, the repeat etc. That would point to bit 4. being stuck, and I think there is another error higher up. The video RAM is testing OK though (I think I can read that amongst the rest), and there are various RAM faults as well. 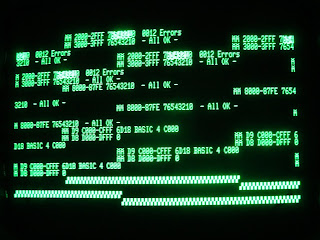 I replaced all three mux chips. When one goes, there's a fair chance more will go. They also have a tendency to fail as they work quite hard. 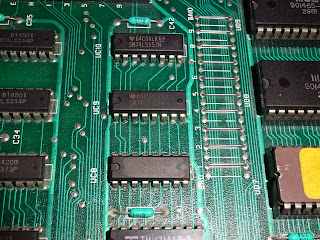 Unfortunately, that didn't fix it. It cleared up part of the problem, but not all of it. I checked over the work, no shorts, everything testing fine, and the chips were new from the tube. I couldn't see anything wrong there, so I looked further up the food chain. The 157s switches the addresses generated by the 6545 CRTC. The 40 pin chips on this board are socketed, so it was a simple matter of replacing the the 6545 to see if it was that. 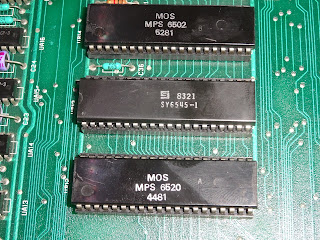 Well what do you know, faulty 6545, and probably at least one faulty 157. I need to build a proper tester for these. They usually pass on the chip tester built into EPROM programmers as they test at quite low speeds, and these things tend to do OK at low speed, but in their old age can't do things as fast as they used to be able to do (happens to us all). 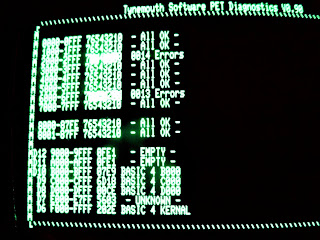 I don't like running boards too long in this sort of state, if there are faulty chips writing to the databus when they shouldn't, that can burn out other parts on the same bus, the strongest driver transistors win. I noticed the number of RAM faults wasn't constant, but was worse than the previous photo. I did have time to finish probing around the board, and I found the culprit. 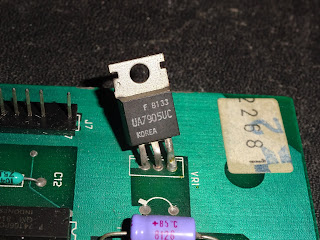 This is the 7905 regulator which generates a -5V reference voltage for the 4116 RAM chips. They always seem to be at jaunty angles and are not bolted or riveted down as the tab is connected to the input voltage, rather than to 0V on the 78xx versions. If you do bolt one down and connect the tab to the voltage rail bad things will happen. It looks like the right hand leg has some extra solder on, as if it had been repaired in the past. 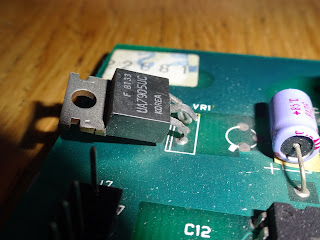 The central leg was sort of touching the pad, but wasn't actually connected. When I had first powered on the board, one of the first things I do is check the supply rails, and -5V was present then, but it's not now. Rather than replace this with a similar part, similarly lacking support, it could snap off again, or vibrate around in shipping. I prefer to replace them with an alternative version of the 7905. 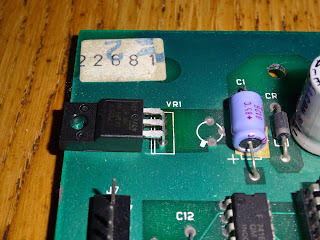 This has a plastic cover all around the tab, so it can be mounted flat on the board without shorting out. There is no problem here with heat, as the -5V is only a reference, and it looks like the board has pads for a small TO18 packaged version. I don't think they make those any more. 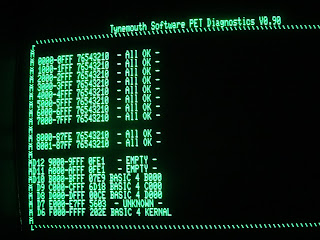 Everything is now passing. The editor ROM is consistent CRC, but not a version I recognise. The normal DIN versions are 4K ROMs, but this is on a 2716 EPROM, so it's only 2K. It appears to have a different keyboard mapping to the previous German DIN editor ROM. I'll add it to the list of known CRCs. 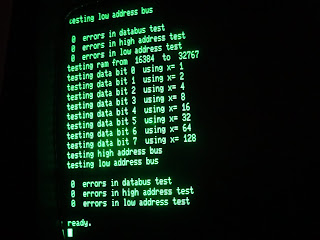 It took a while to guess which keys to press again, but I got it to load from tape and seemed to be running well. I couldn't get it to load from IEEE-488, but a closer inspection around the IEEE-488 connector explained that. 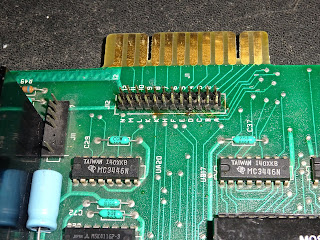 These were not fitted from the factory on later models, It looks like someone has fitted a connector to the normally empty pads, but has unfortunately damaged some of the through hole plating in the process. 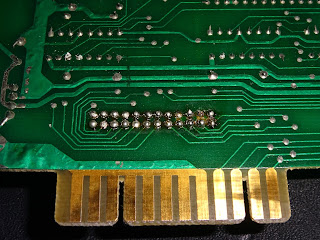 I did what I could to patch up the broken continuity and got the edge connector active again, and looking extra shinny with a touch of contact cleaner and fibreglass pen.