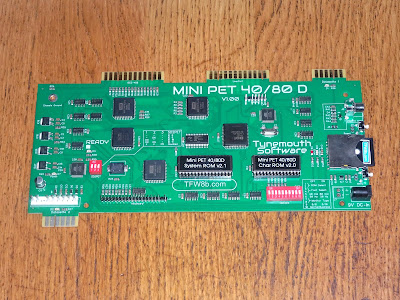 This is a drop in replacement motherboard for any Commodore PET or CBM*. It comes with the full 32K of RAM, a selection of BASIC versions, including Mini PET BASIC 4.1. It also has a built in SD2PET SD card disk drive. 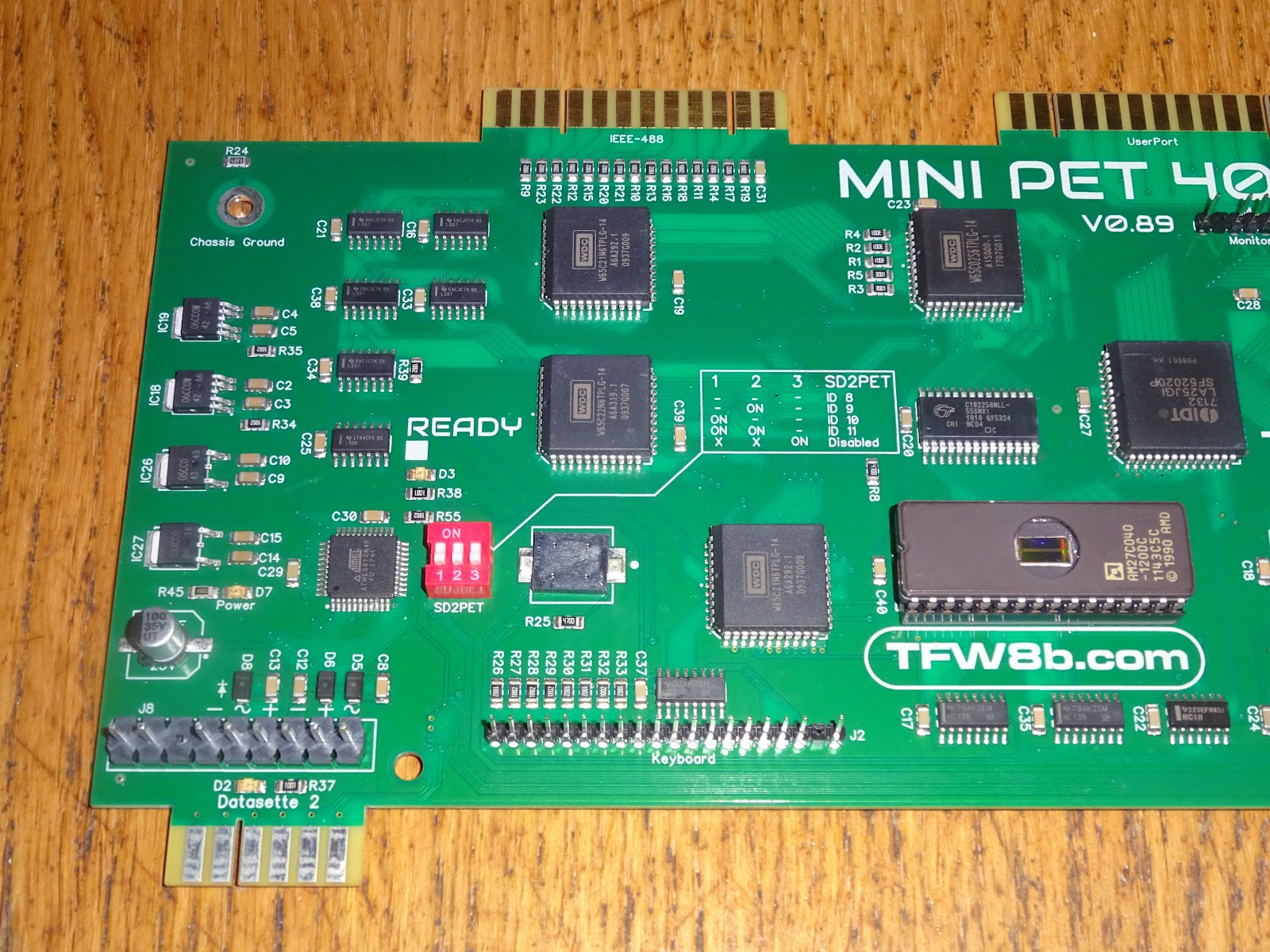 The board come preassembled, using all surface mount parts (other than the ROMs). It is based on the design of the Mini PET 40/80, and uses real WDC W65 series chips. There is a microcontroller based CRT controller using the same dual port video RAM, and as before video is generated from video RAM, indexing a character ROM and output via a shift register. 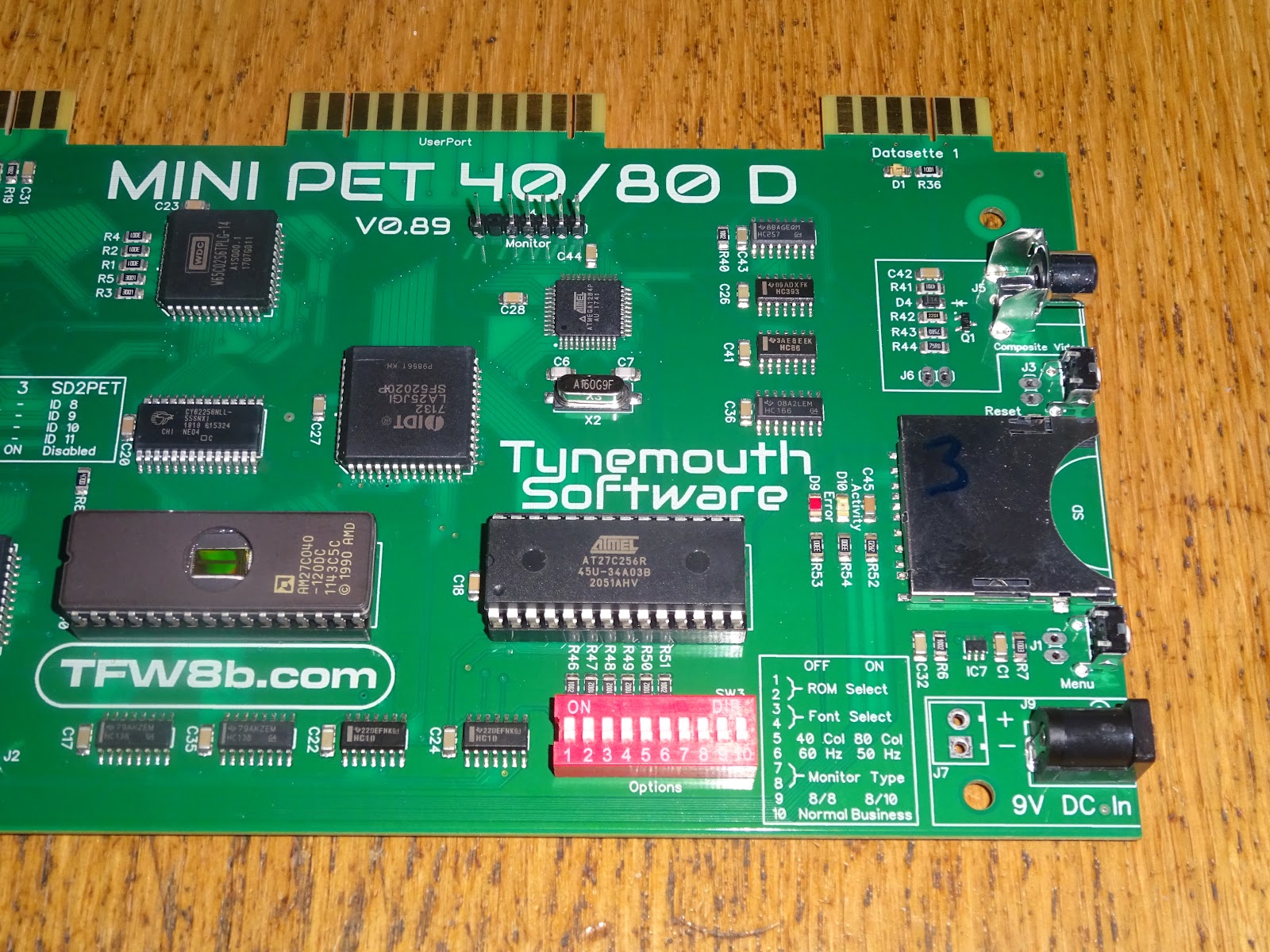 It comes all programmed and tested and ready to run. 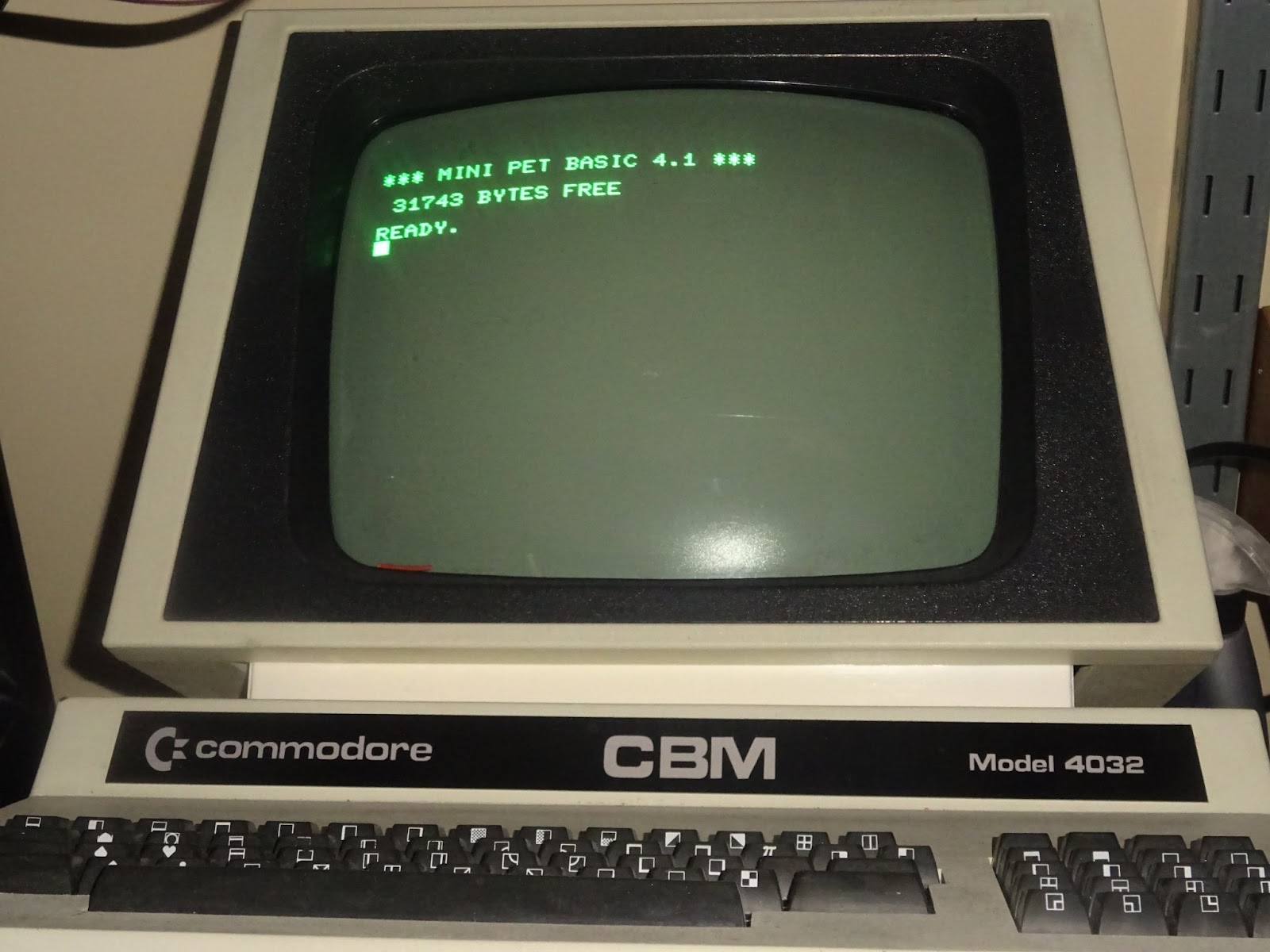 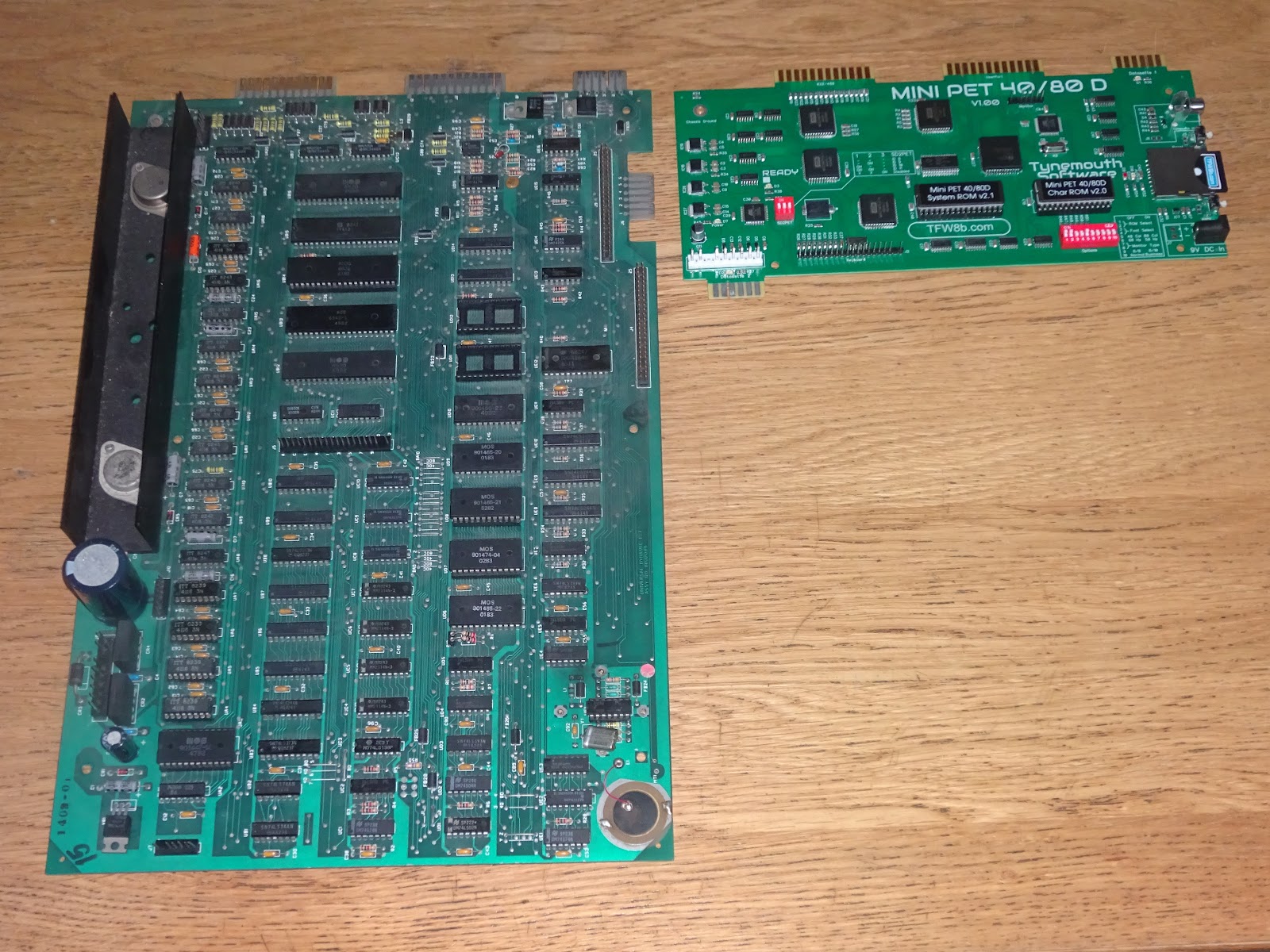 As you can see, the Mini PET 40/80D board is quite a lot shorter than the 8032 board, but it is the same width, and has the same rear mounting holes and edge connectors for IEEE-488, Userport and Datasette port 1. All three are gold plated (unlike the PET boards, most of which only had gold on the IEEE-488 port) 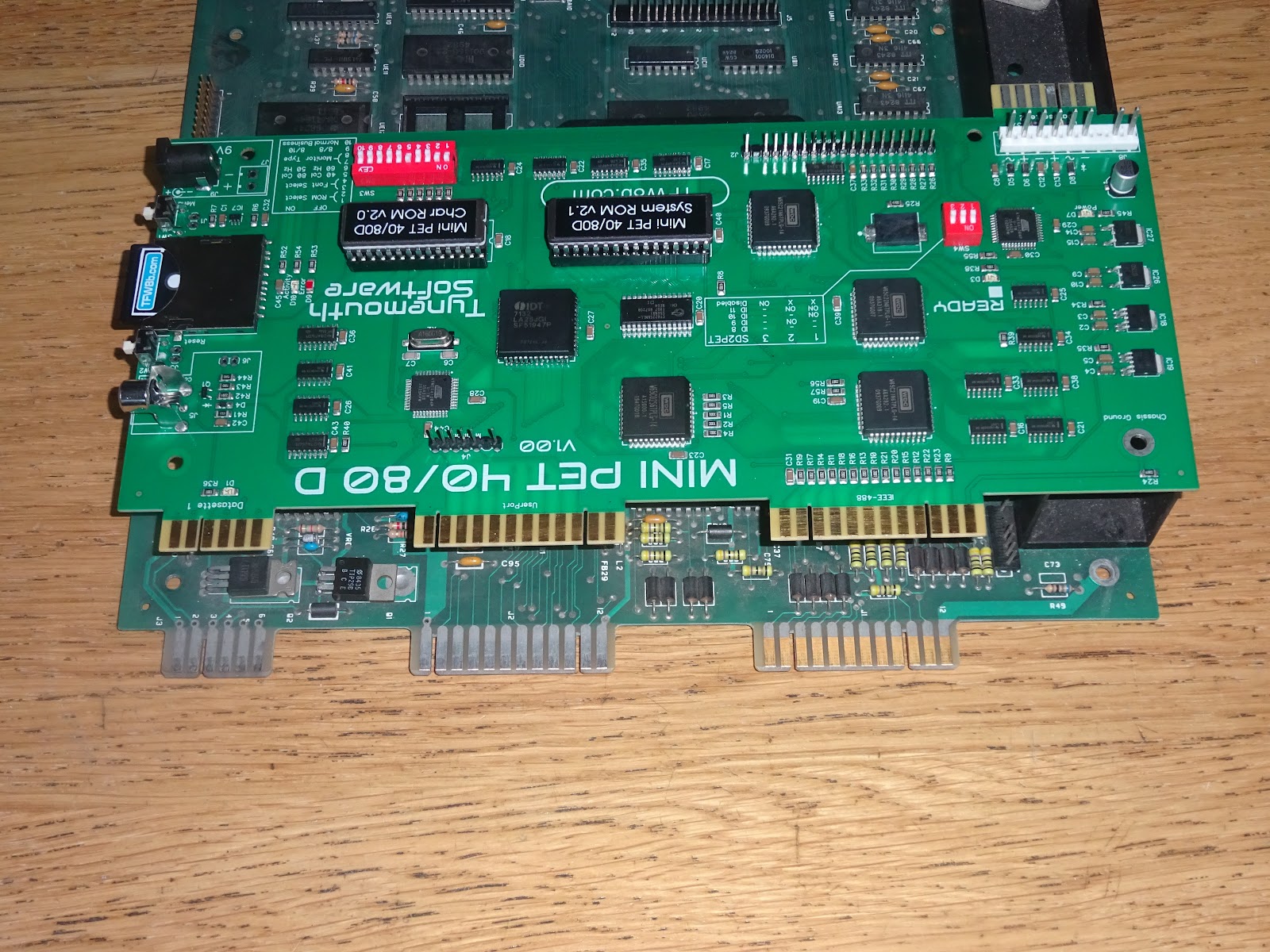 It is powered by from the PET's internal power supply, and can drive the internal monitor and use the built in keyboard. A complete drop in replacement. 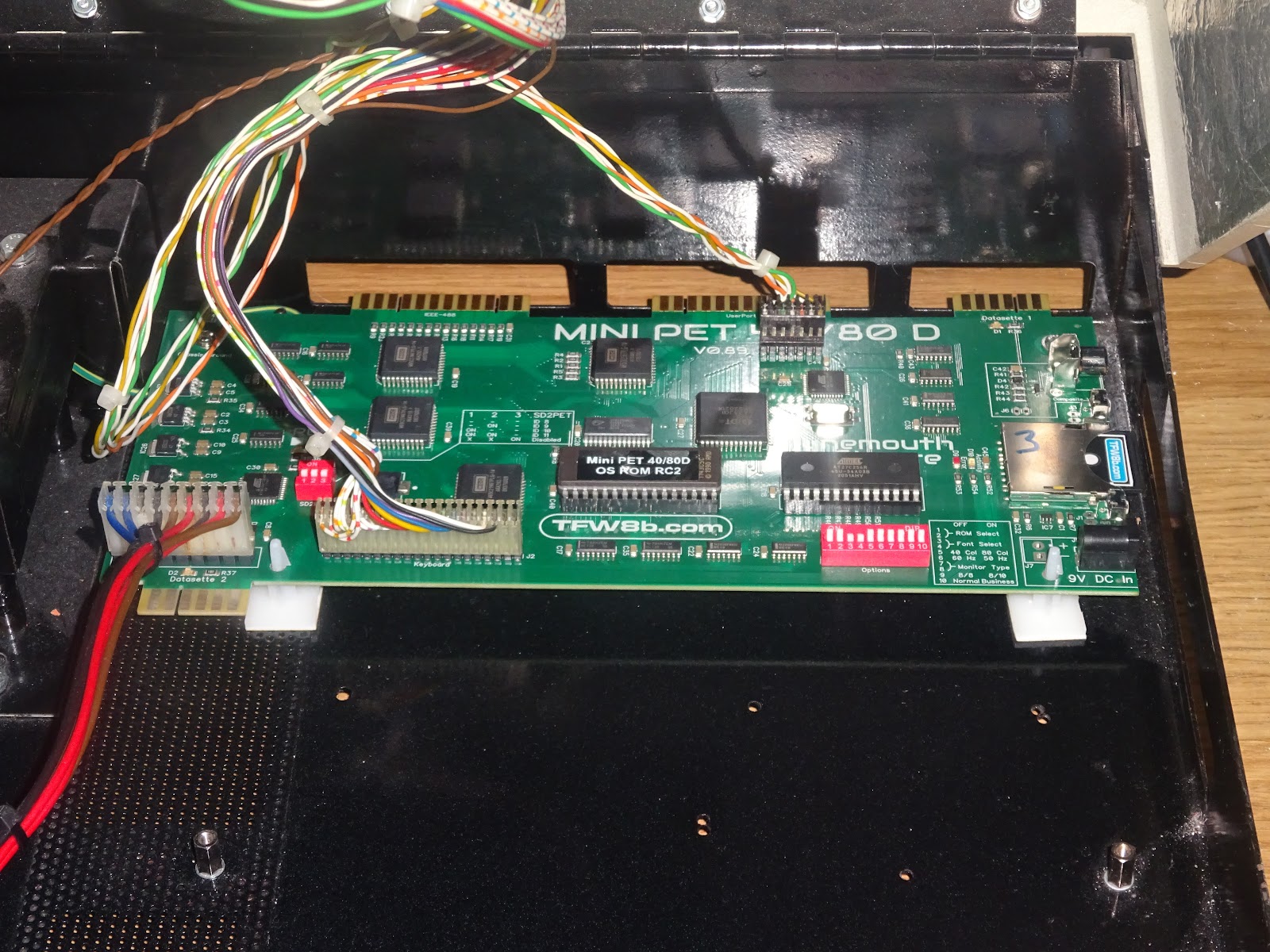 It also has a built in SD2PET SD card disk drive that can be used alongside the external IEEE-488 port. 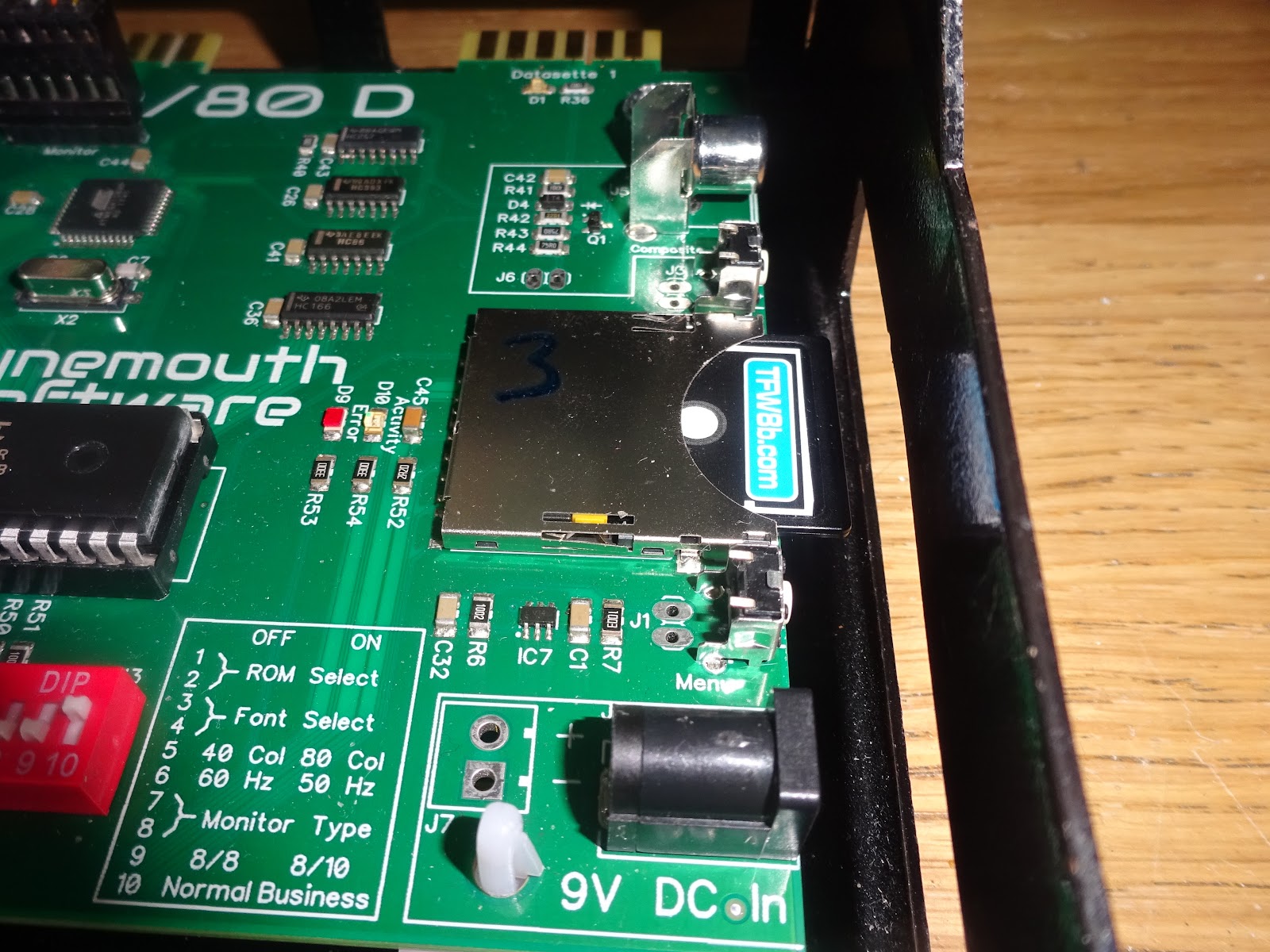 This has the same built in file browser as the Mini PET 40/80, activated by the menu button on the side. The SD card slots and menu and reset buttons are on there side where the expansion connector was on the 2001, or the second datasette port on the 8032. 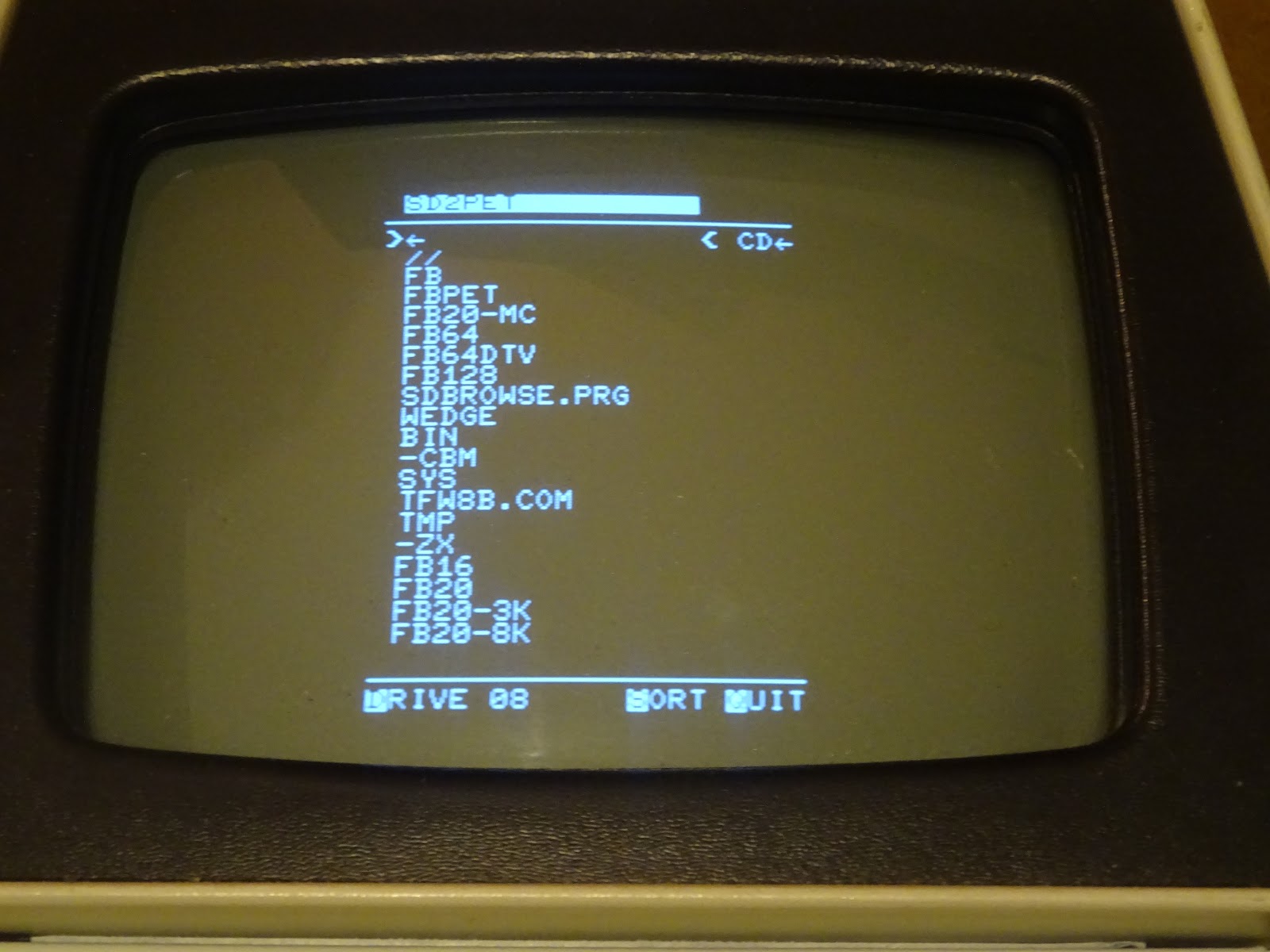 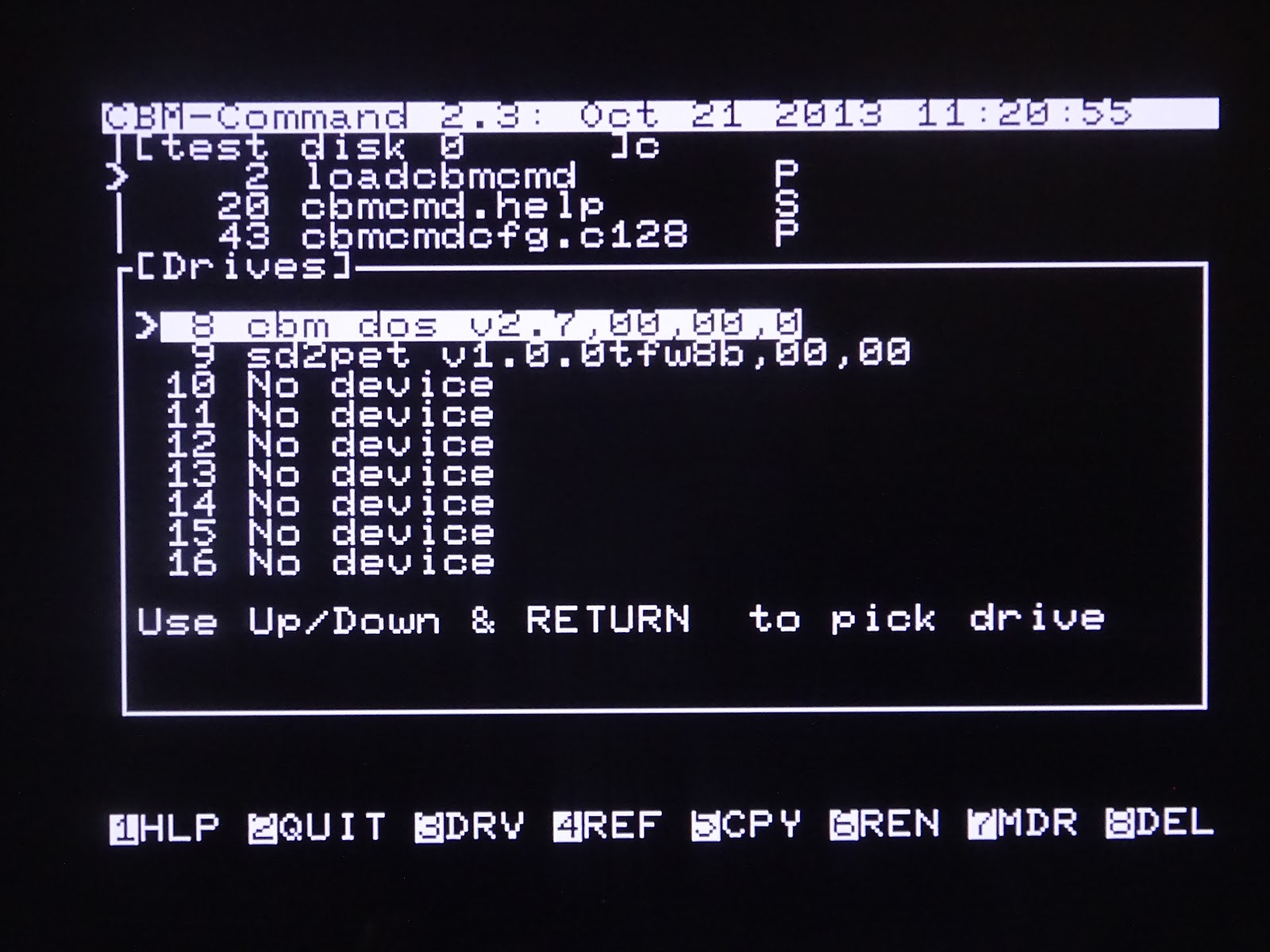 I recently repaired an 8250LP (blog post on that to follow), so I have been using the 40/80D to do a lot of testing on that (shown with an earlier prototype version with ZIF socket during ROM developemnt) 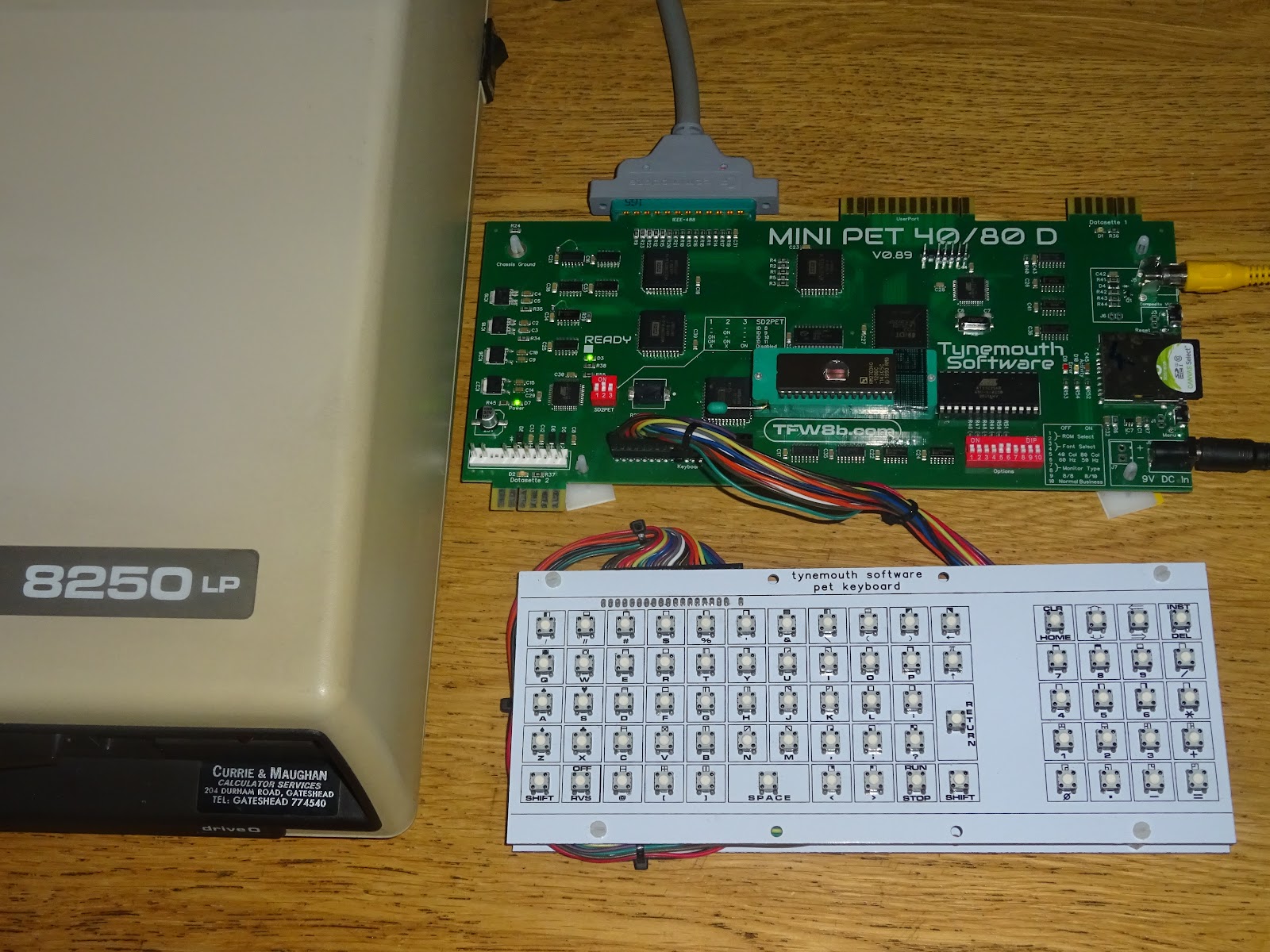 The 8250LP may be low profile, but it's still a massive dual disk drive which also makes a nice stand for a Mini PET 40/80. 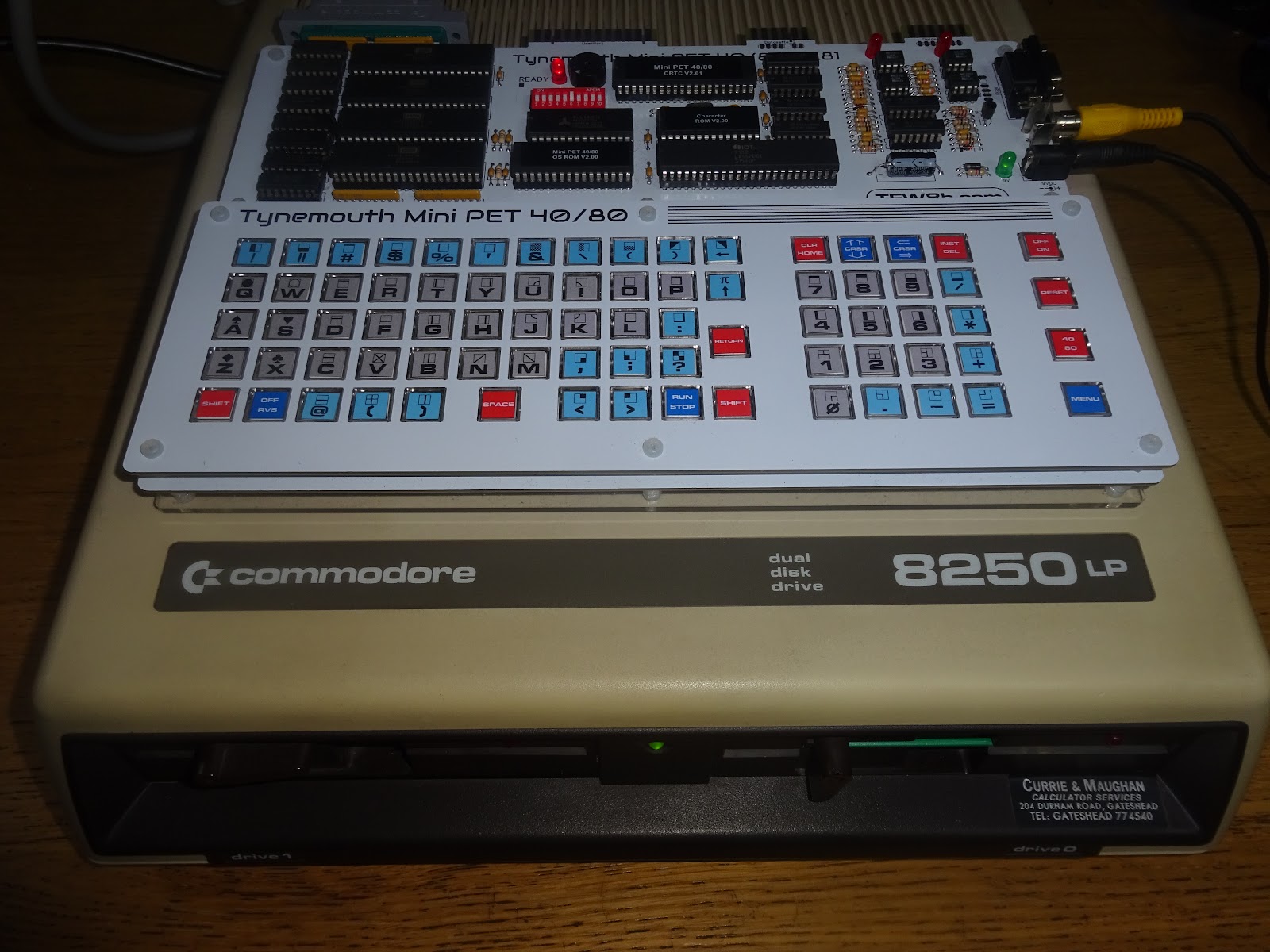 I have been doing a lot of file transfers and drive tests to give the IEEE-488 bus a good workout. 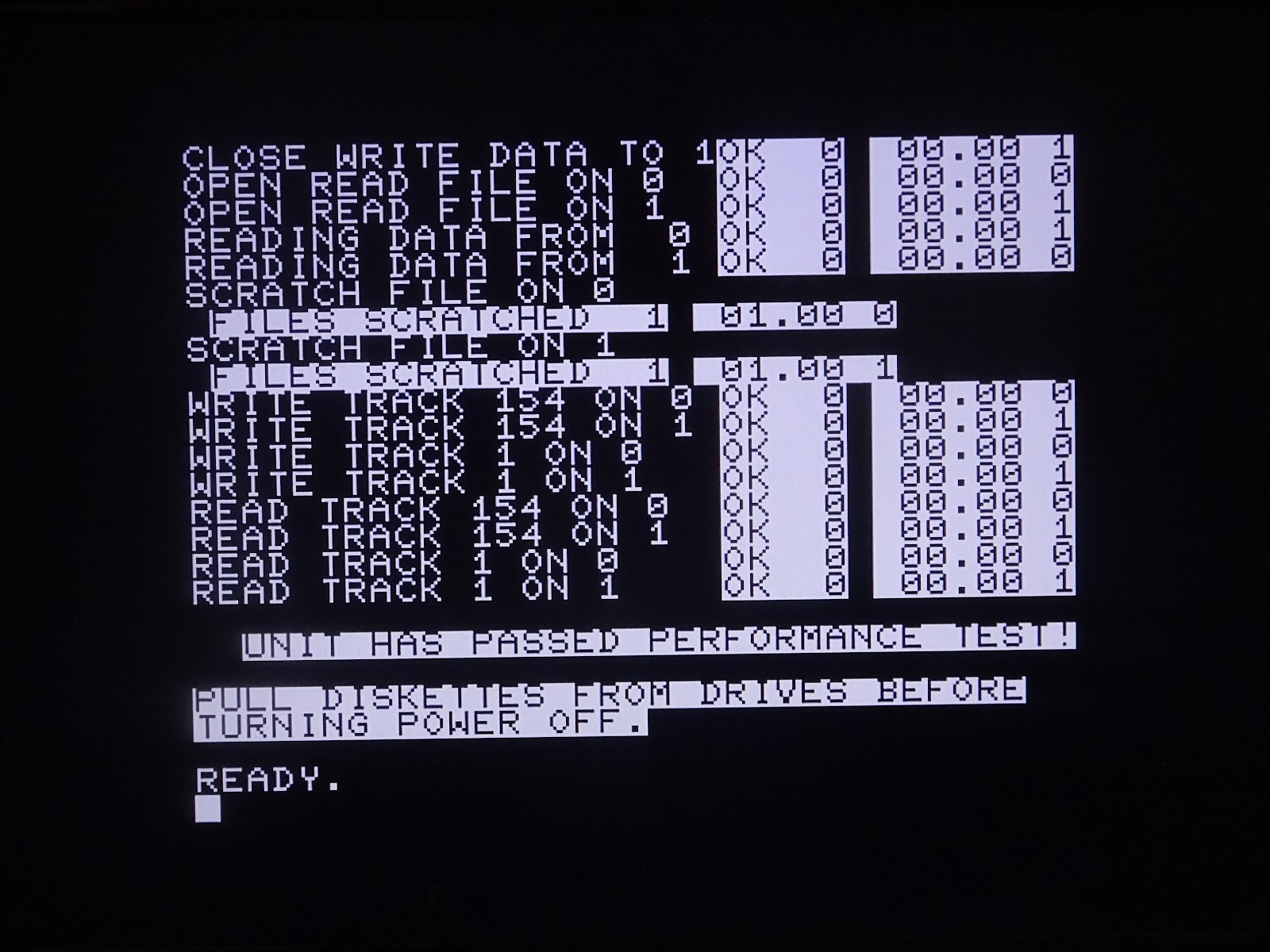 Text adventures are a good test to create lots of disk activity, but also to show off the 80 column text mode. Even if it doesn't like my suggestions. 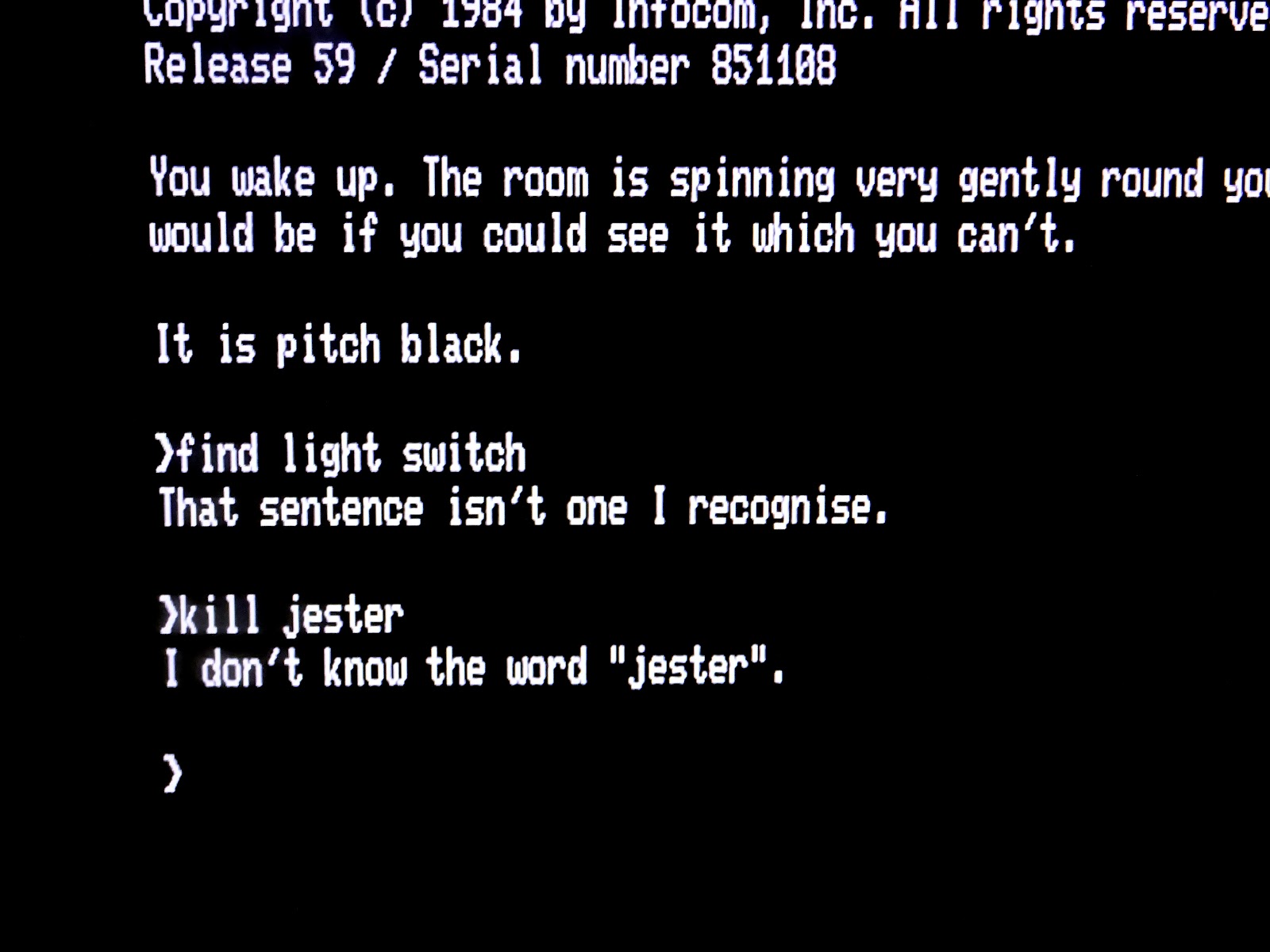 The Min PET 40/80D comes with a cheat sheet showing all the DIP switch options. You should set this up according to the type of monitor and keyboard you have. 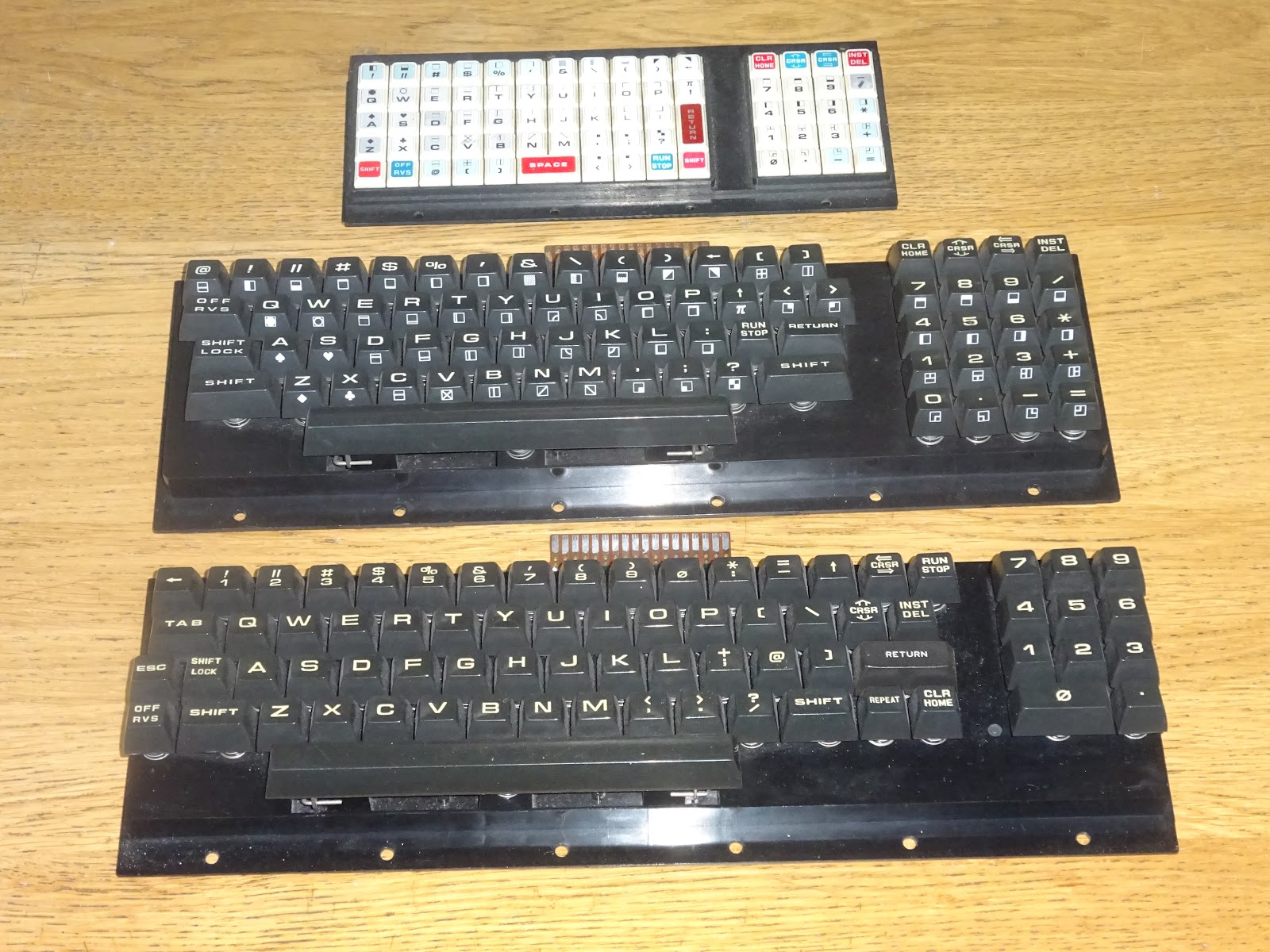 The chiclet, normal and graphics keyboard are supported, for simplicity, the guide is split based on the number of keys in the numeric keypad. You select the version of BASIC and 40 or 80 colums and set the DIP switches as shown. 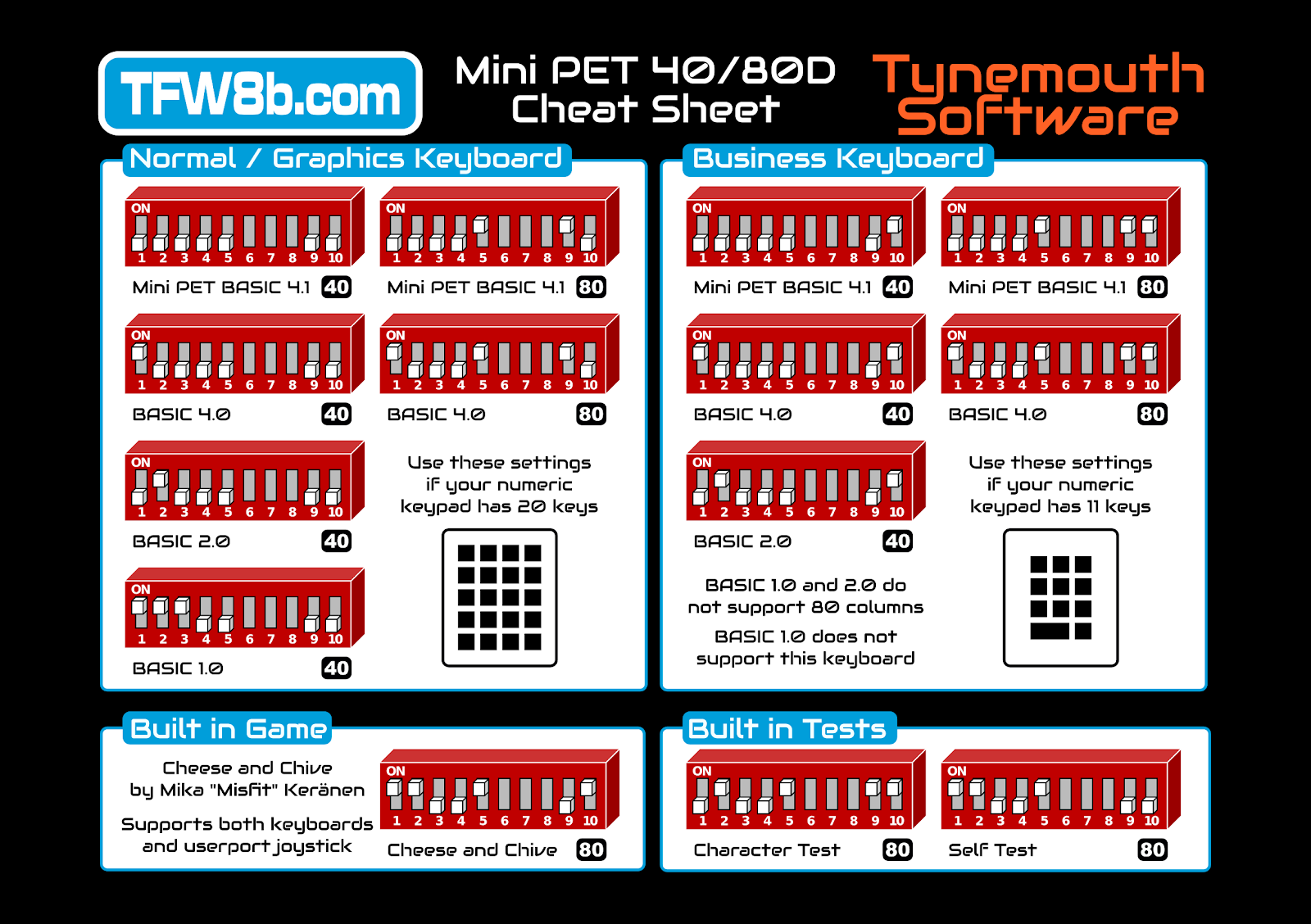 The missing switches are set based on the type of monitor. PET 9" and 12" monitors are support, as well as composite video output at 50Hz or 60Hz for PAL or NTSC regions. 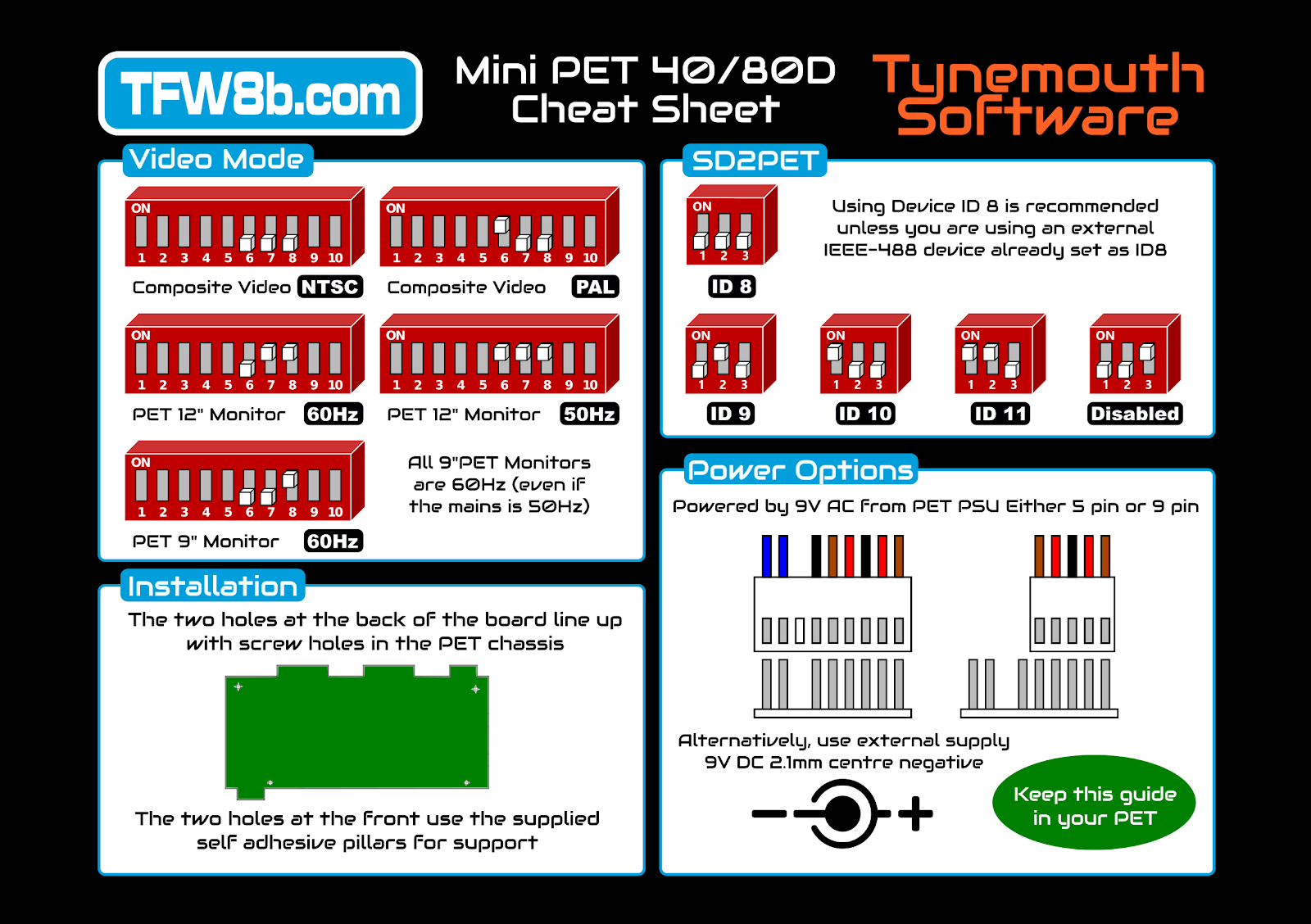 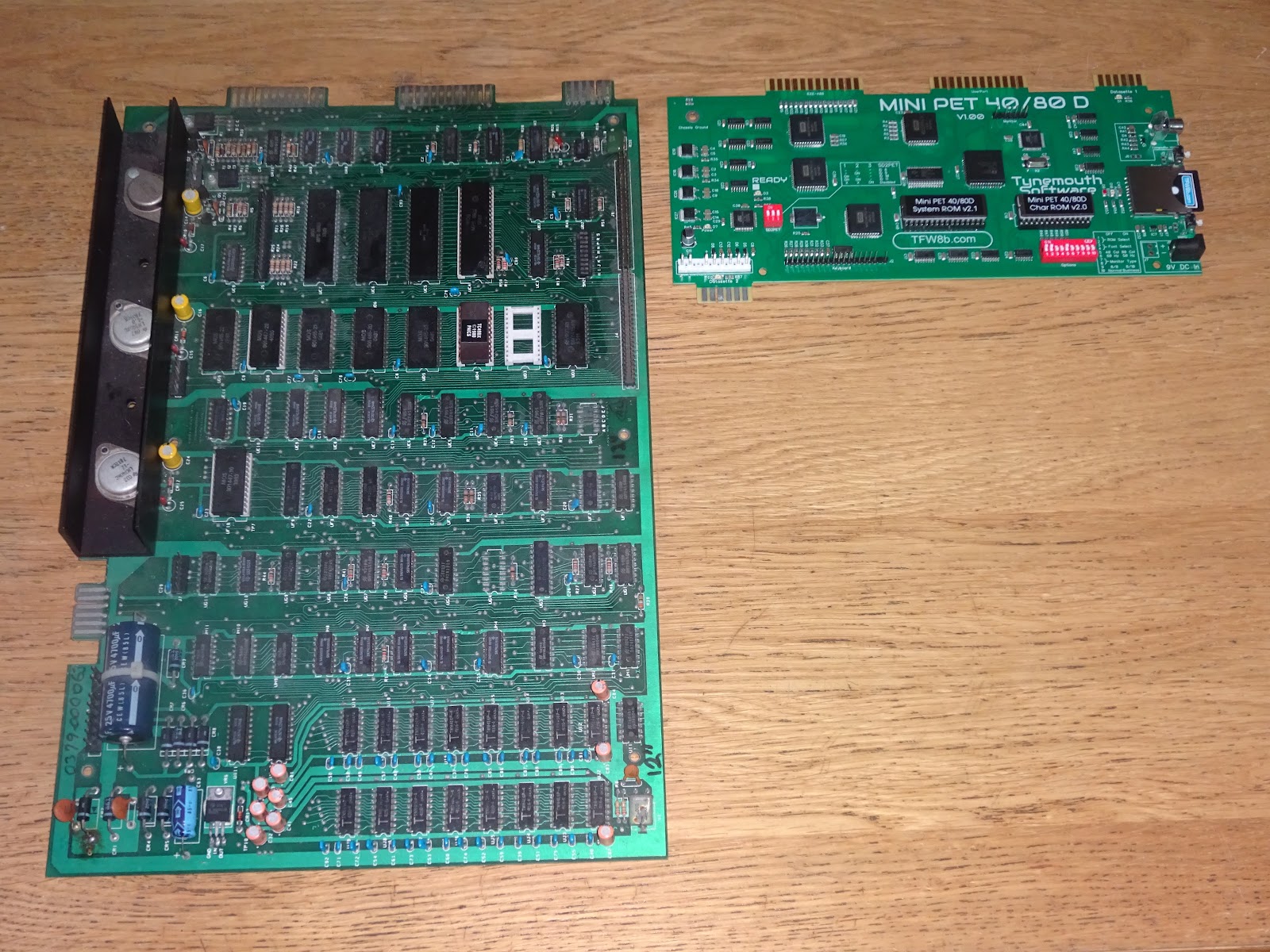 The 9" PET machines usually had this version of the board, again the Mini PET is a drop in replacement. Original PET 2001 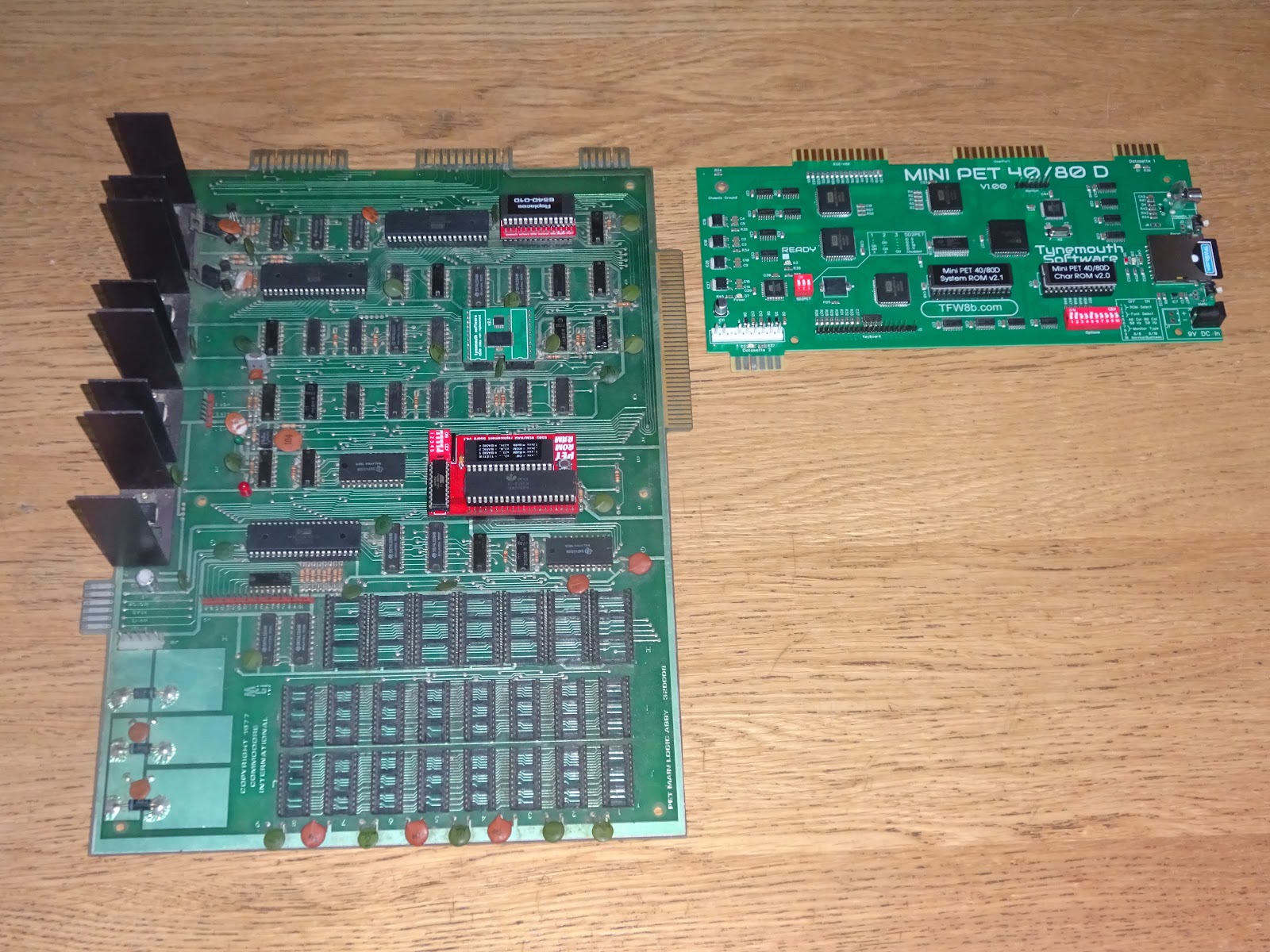 The Mini PET 40/80D can be used to replace the board in a PET 2001. (Mine here has already had the IO chips replaced, video RAM replaced, and the character ROM replaced. All the main ROM and RAM has been removed, as 6540 and 6550 chips just seem to sit there getting hotter and slowly wiping each other out until they all fail, so my remaining working chips are safely in a box somewhere and the board is running on a PET ROM/RAM board. ) All of those can now take a rest as the Mini PET 40/80D has been fitted.

The connections on the 2001 are slightly different as the power connector is 5 pin and there is an internal datasette, but both are supported on the Mini PET 40/80D. 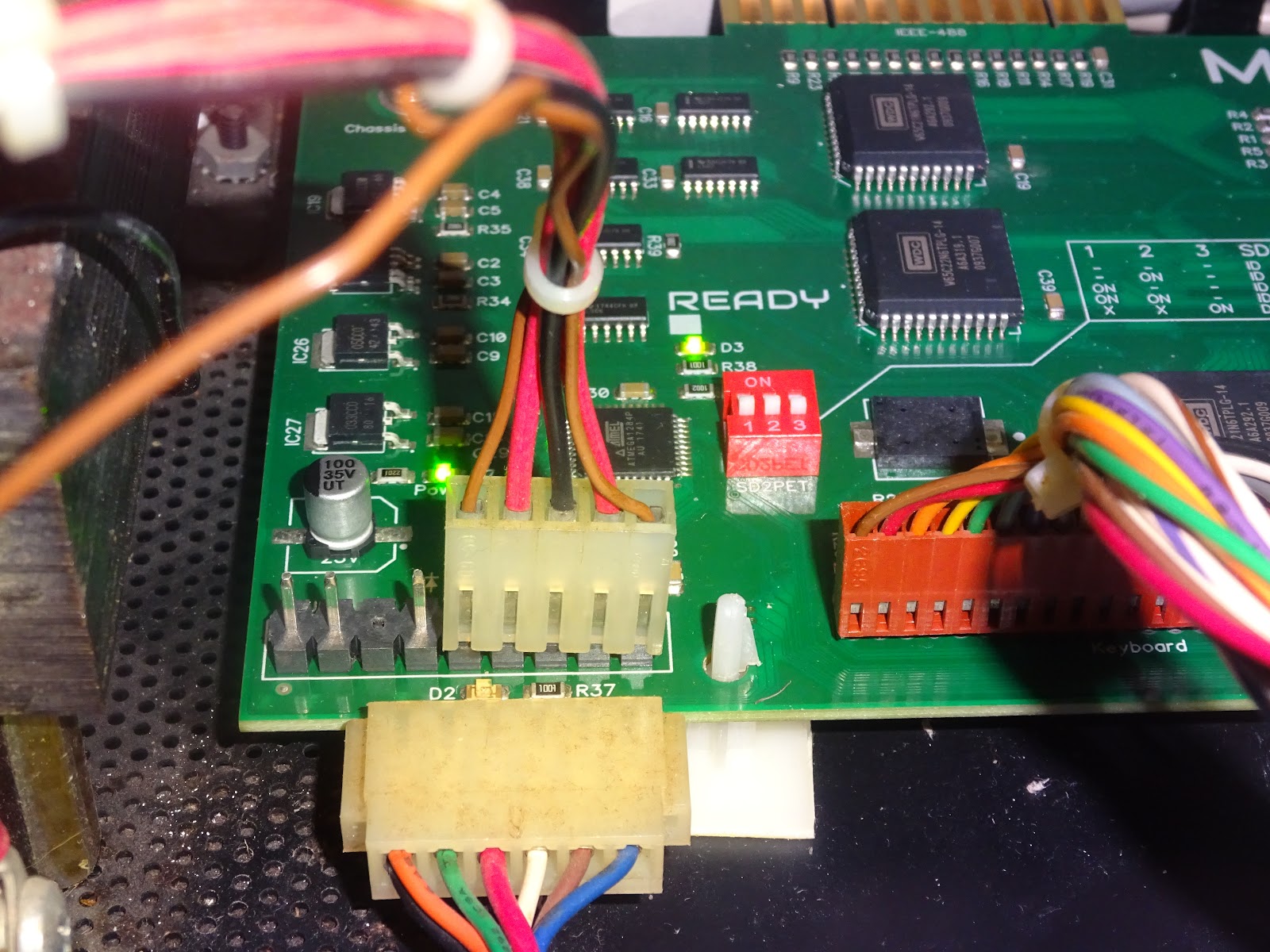 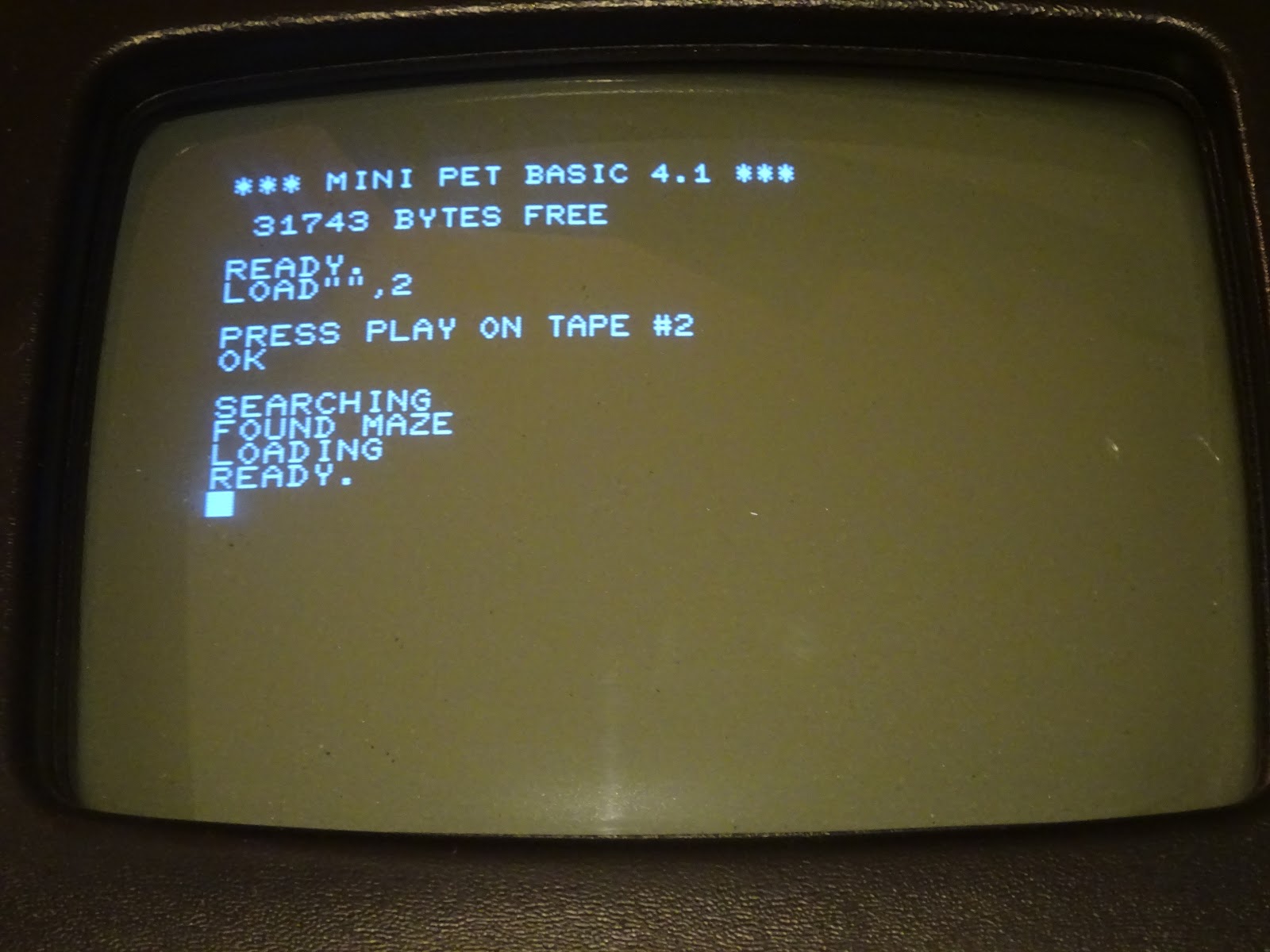 I doubt there are many PET 2001's that can run in 80 columns (here running the built in self test). 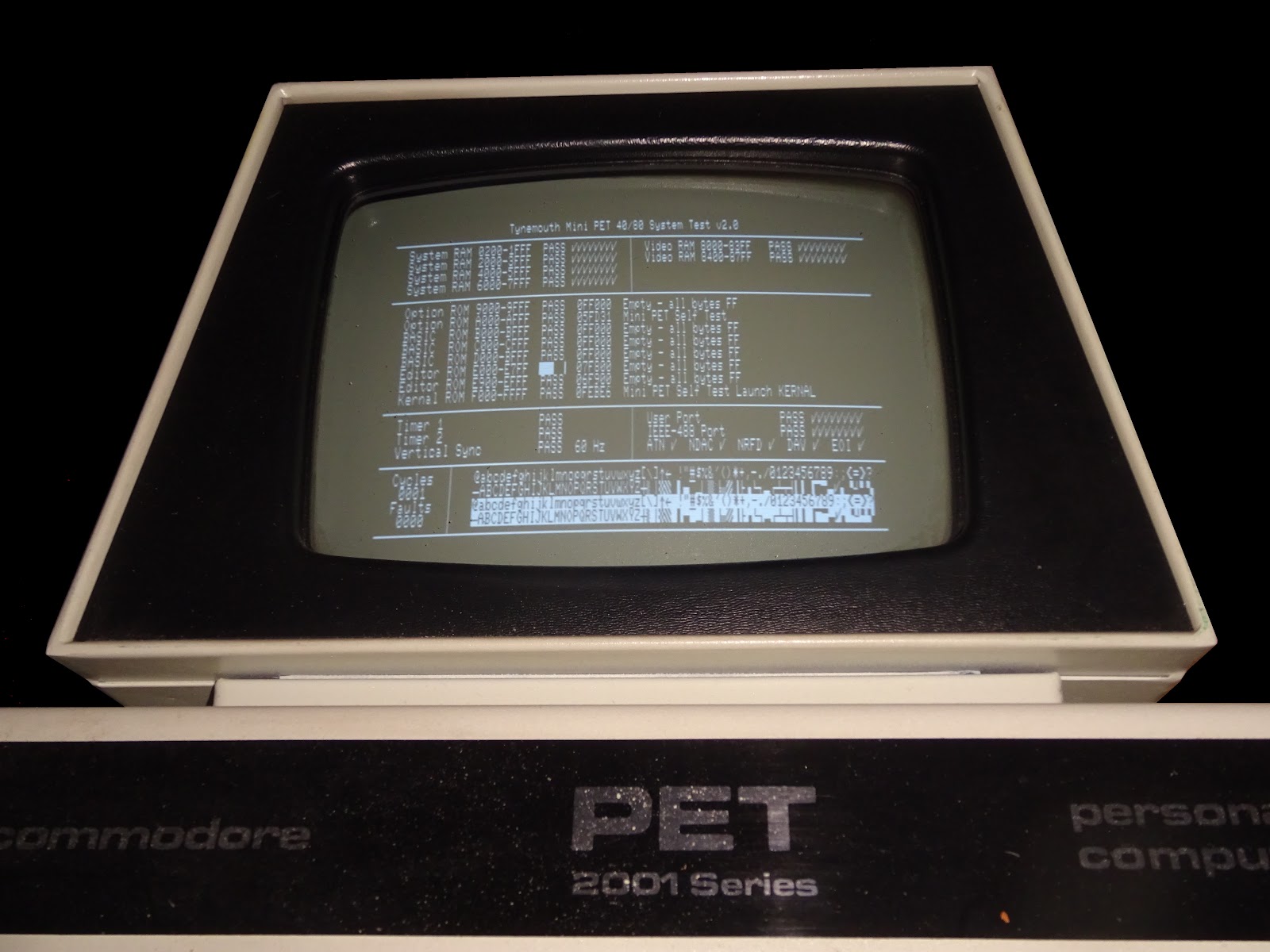 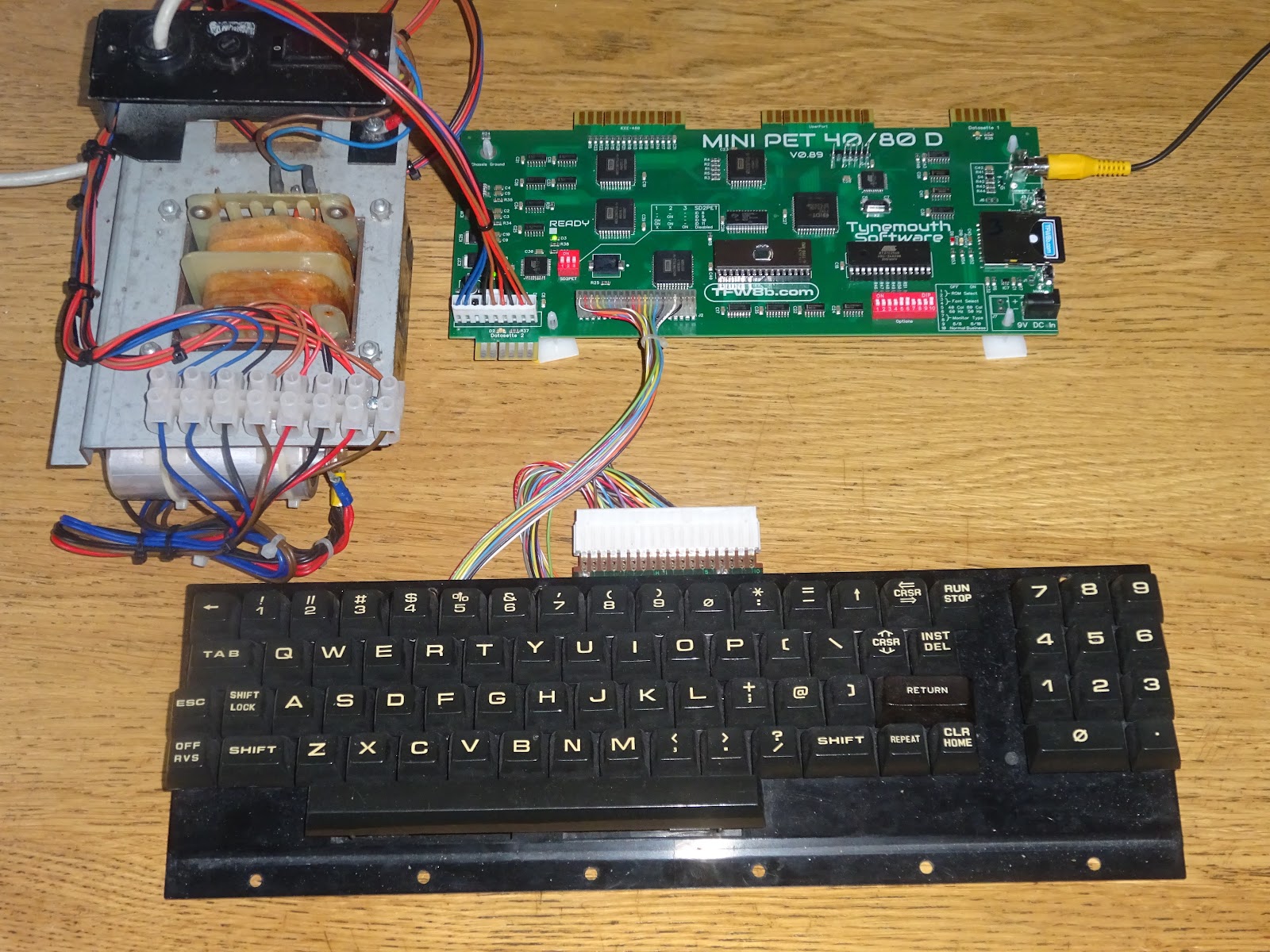 As well as being fitted into a PET case, the Mini PET 40/80D can be used for bench testing, here powered by my PET test power supply, or it can be powered from an external 9V DC power supply. 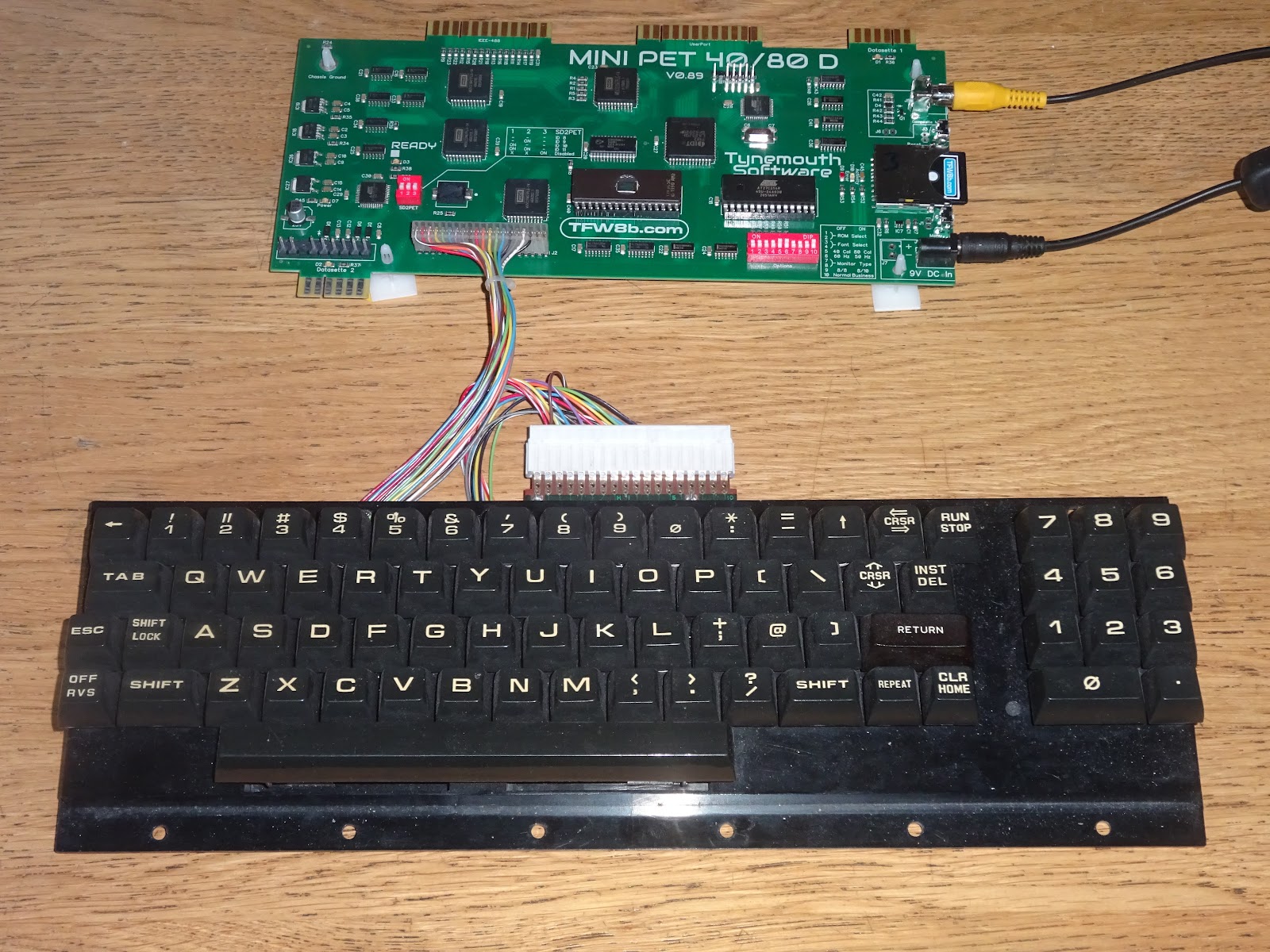 What else can I say? What more do you want?
OK, how about a built in version of Cheese and Chive? 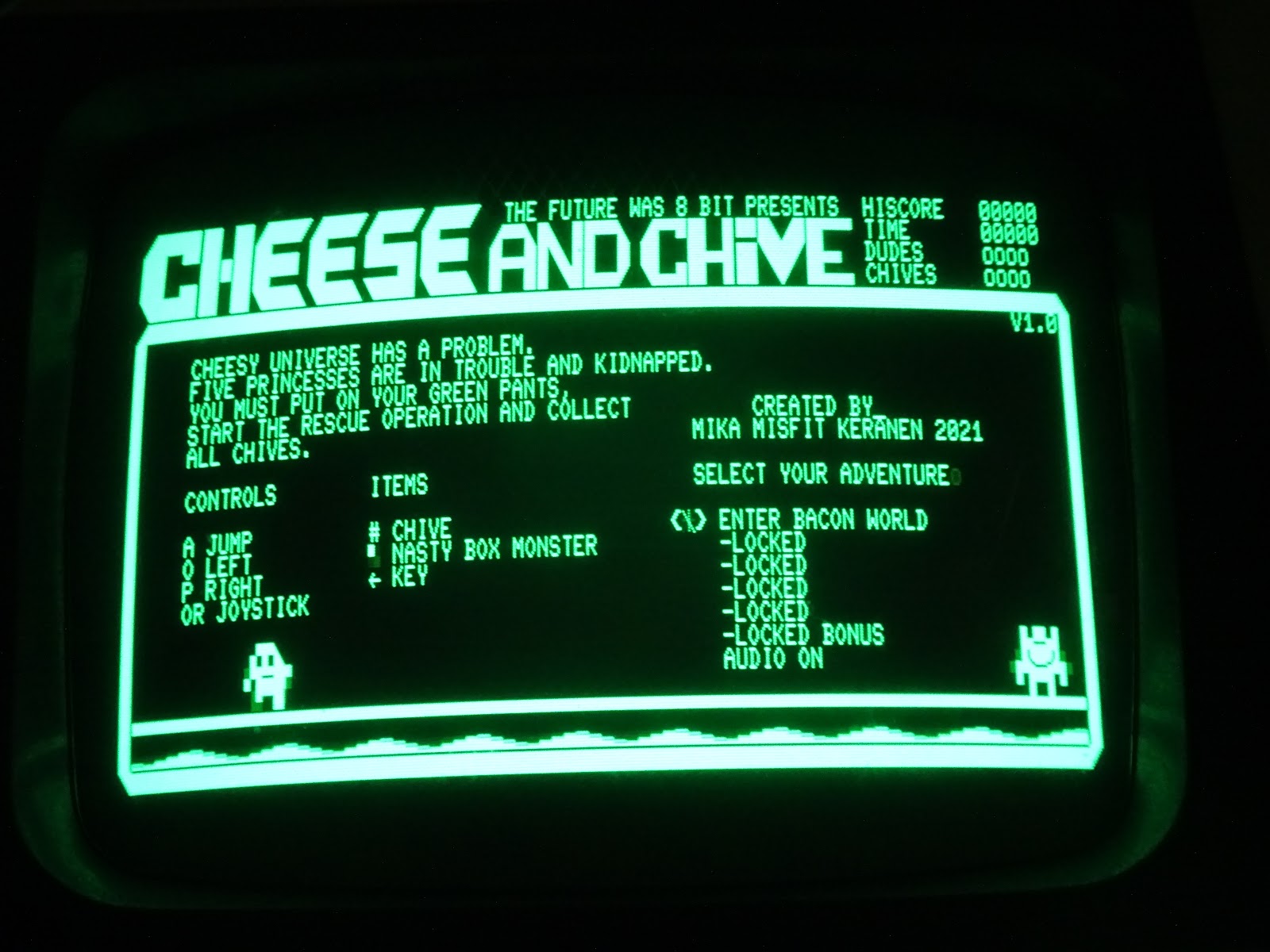 Well, I may as well get this one in here, there is no support for a Commodore 64 or VIC 20 keyboard. AZERTY, QWERTZ and other international keyboards will need a custom ROM (or just rearrange the keycaps to QWERTY). 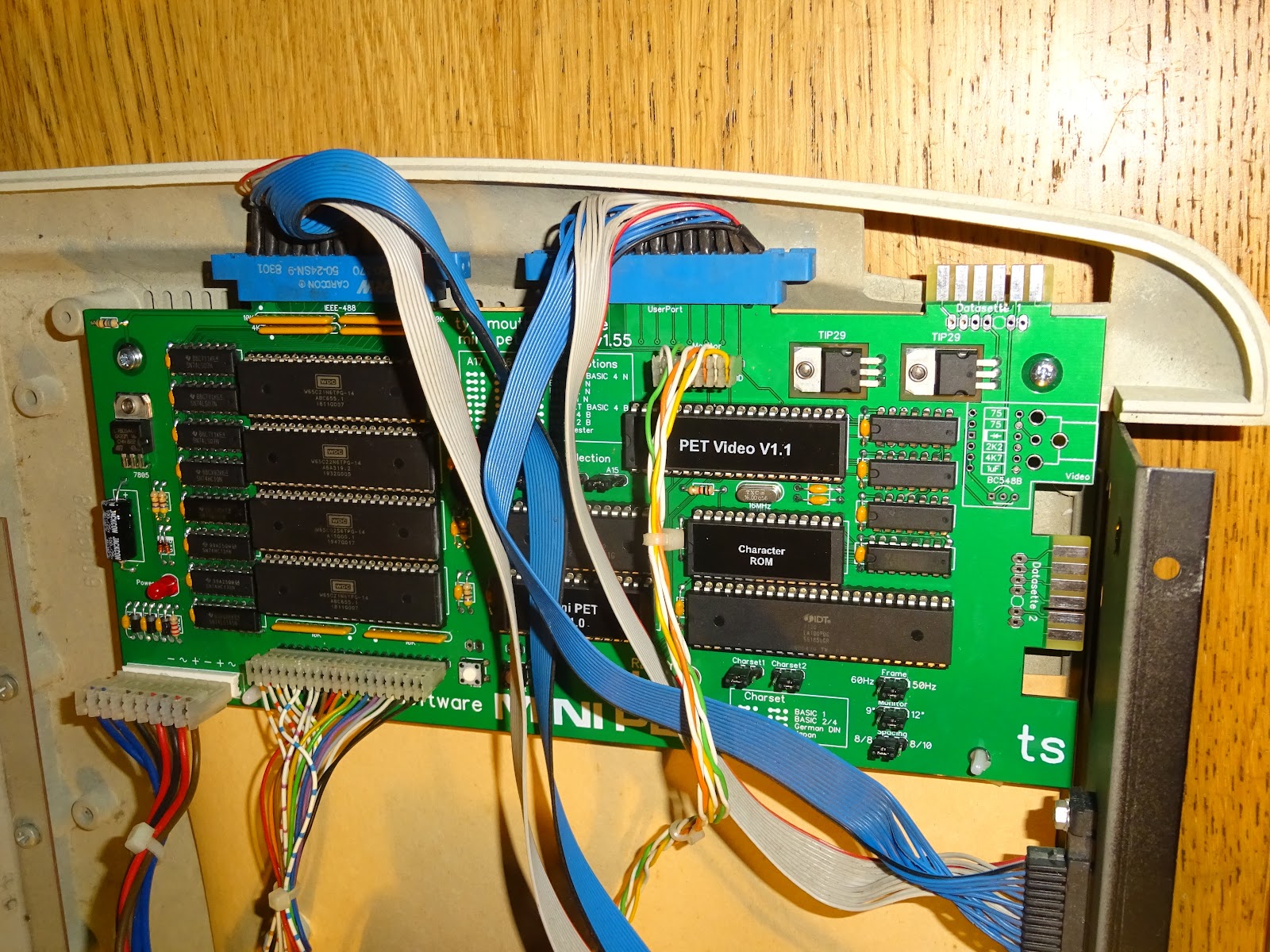 The board will fit in the case for an 8032-SK and 8096-SK (here shown an earlier through hole version of the Min PET), but the keyboard cable may be a bit too short to reach, there appears to have been some variation of the course of their production.

There is no support for anything that plugs into the 6502 socket, ROM sockets or expansion connectors on a normal PET. No ROM boards, 64K RAM boards or Super PET 9000 boards etc.

Where can I get one? 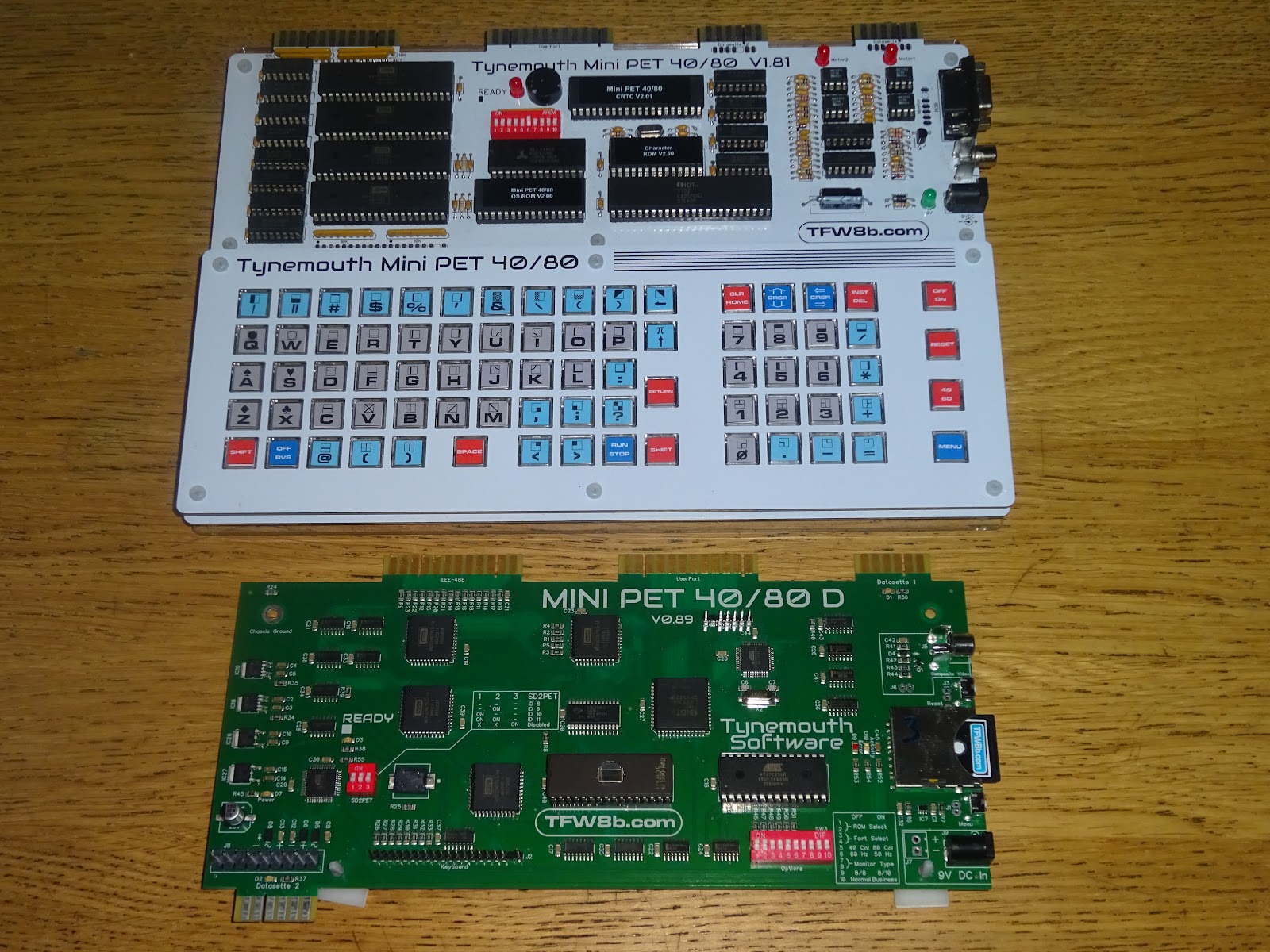